The online magazine Yale Environment 360 was created in 2008, a time when many media organizations were shedding science and environmental coverage. As e360 celebrates its 10th anniversary, the urgency to fill that gap is greater than ever, says editor Roger Cohn.
By Kevin Dennehy

It was in that landscape that the Yale School of Forestry & Environmental Studies (F&ES) launched a new online magazine, Yale Environment 360, which promised to cover these critical issues from a global perspective, with depth and scientific rigor.

A decade later Yale Environment 360 is still doing just that, reaching millions of readers globally with in-depth coverage by the world’s leading journalists and scientists. And still at the helm is Roger Cohn, formerly editor-in-chief of Mother Jones and executive editor at Audubon, who was recruited by F&ES to create and run the magazine.

In an interview, Cohn describes the important niche e360 has filled since 2008, how it has evolved in its first decade, and how being at F&ES has made the publication stronger.

What has Yale Environment 360 brought to the landscape of environmental journalism? 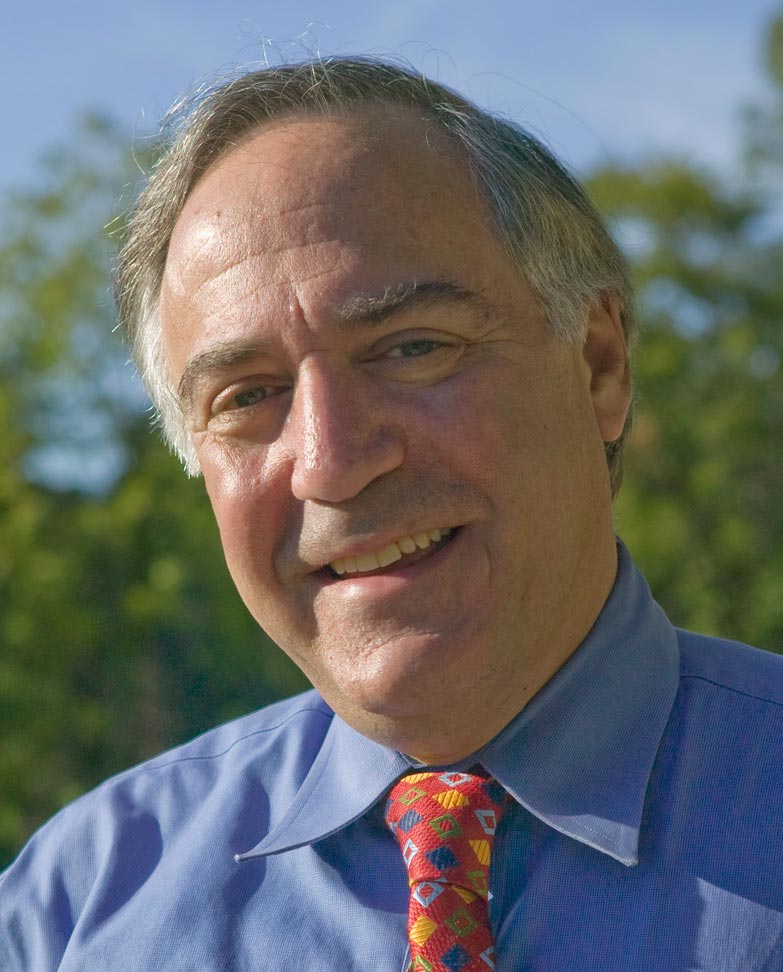 Roger Cohn
Roger Cohn: When we started, our mission was really to fill a gap. The mainstream media was cutting back on environmental coverage, and environmental desks and reporters were being eliminated as budgets were being cut. It was an area that was seen as expendable. And we were looking to fill that gap in a way that provided more depth — particularly on the science behind the issues — than the media that was out there was doing.

That was our goal from the beginning, and it’s still our main mission. We represented a newer model of how to do environmental journalism outside of the mainstream, profit-driven media or those that were led by conservation organizations. At the time, the idea of a publication being operated out of a nonprofit institution — in our case, here at F&ES — was something of a new concept. Now there have been a lot of publications started around this model, not just about environmental issues, but newsgathering as well, and many other areas. And I think that has proven to be an essential model for doing journalism in this era.

How has the landscape changed since 2008? And how has e360 adapted?


Cohn: When we started climate change was just emerging as the dominant issue in the discussion of environmental issues. It still is, of course. But it has evolved in the sense that the implications of climate change and its various tentacles — whether it’s the importance of renewable energy or sea level rise or the impact of a changing climate on urban areas or drought and food supplies — are now infused in most issues that we cover. That’s something that really grew as awareness grew. And I’m not just talking about among journalists, but scientists’ awareness and public policymakers’ awareness. And our job is to keep building that awareness.

What other issues have you seen take on increased urgency during the past decade?


Cohn: One example is urban issues. Not that it wasn’t true 10 years ago, but I think there’s an increasing recognition of the effect of megacities and the importance of managing cities in a way that minimizes the carbon footprint and the overall environmental impacts. I think you can see that in our coverage — it’s something we’ve focused much more on in recent years. And I think that’s part of a general awareness that environmental issues need to run a lot deeper than concerns about conservation and protecting open space and wildlands. Those are critically important, of course, but if we’re looking just at these concerns without looking at these urban challenges, we’re missing the boat.

The past decade has been frustrating in terms of confronting climate change issues here in the U.S. But that hasn’t been the case everywhere. What kinds of progress have you observed in other parts of the world?


Cohn: Well, even since e360 has been publishing, the changes in outlook and policy in China have been stunning. If you contrast that what we’ve seen in the U.S., particularly in the last year with the Trump administration, the direction in terms of prioritizing and progress on environmental challenges has been striking. China has really big challenges, but they have unambiguously made it a priority to try to meet those challenges. The Chinese government sees it as important to their future — their economic future, their health as a country, their position in the world. And they’re making a strong push with their policy to create an “ecological civilization,” to make that part of the public consciousness there. And I think that’s happening in a way that has never fully happened in this country. That has a lot to do with their system of government, of course, but the ruling party in China has stepped up to the challenges that they face in a dramatic and sudden fashion.

An increased focus on environmental issues in places like China has coincided with the explosion of global communications and digital technologies. How important has it been for organizations like e360 to be able to reach a global audience?


Cohn: Well, that has been one of our goals from Day One. This was designed as a web-only publication from the beginning, and one of the reasons was that we wanted to reach an international audience. And we’ve achieved that beyond our expectations. Nearly 40 percent of our audience is from outside the United States, with an increasingly strong traffic in places where we think it’s important for these issues and these stories to be seen. That’s especially true in China and India. We think it’s extremely important that these issues be thought about, debated and acted on in these parts of the world.

We really want to continue to push our coverage, and our reach in key parts of the world, most especially in China and India. We’re trying to increase our distribution in both countries through partnership arrangements that we’re working on. I think that’s really important because of the enormous populations in both those countries, and because of the environmental challenges they face. If you reach them, you’re going to have tremendous impact on the world’s ability to deal with the climate issue. So the more we can be seen and read in those places — particularly by policymakers — that’s important to our mission. 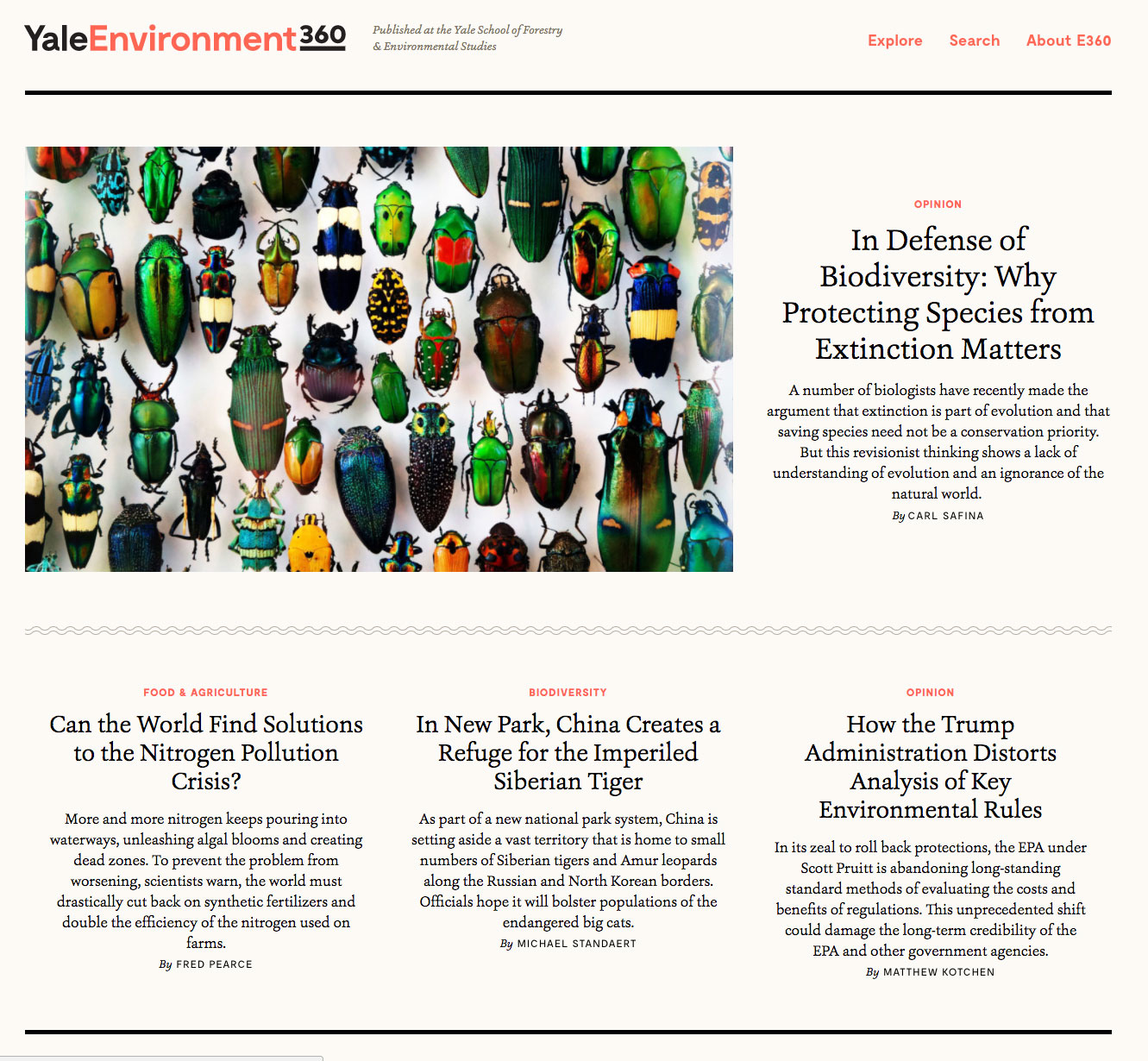 How have you expanded your readership internationally?


Cohn: One thing that has really boosted our international reputation is social media. When we have a story that really gets picked up on social media, we can have a rush of readers in Australia or Germany or Brazil or wherever. We’ve also developed some partnerships that have been indispensible to us. The Guardian, which is obviously well read throughout the English-speaking world, reprints our content. We‘ve also had a partnership with Universia, a large consortium of more than 1,100 universities in Latin America, Spain, and Portugal, which has translated select e360 articles into Spanish and Portuguese. And now we’re in preliminary discussions with a university in China and a large news organization in India, which could get us distributed more widely there.

What are you proudest of during your first 10 years?


Cohn: I think it would be our reach, the following that we’ve created, and the respect we’ve gained for the content that we produce.

When we got started, we set out to develop a publication that was well respected, that was providing deeply informed content and in-depth reporting and analysis on global environmental issues with a strong explanation of the science behind the issues. We’ve done that. We’re proud of the articles we’ve done, the videos we’ve produced, and the awards we’ve won. They include, from my point of view, some of the most prestigious honors in publishing, including a National Magazine Award and Webby awards.

How does the fact that you’re based at a university campus affect what you do?


Cohn: I think being here at F&ES has been a big part of our success. Not only do we have access to all the smart work that’s being done here, which helps inform us and keeps us fresh on the latest science and new developments in the field. It’s also enabled us to have a wonderful crew of researchers in the form of student interns.

One of the things that distinguishes us is the rigor of our science and our fact checking. All our articles are fact checked by Yale students, mostly F&ES students, and they’ve been invaluable. And I think for many of them it’s been an important and valuable part of their F&ES experience. Most say they get a tremendous amount out of their internships, because they learn a lot about journalism, about current issues, and they see how a publication works. It’s been beneficial in both ways.

And of course, there’s the faculty. We’ve benefited from having their advice and in many cases contributions of articles, which has all been important to our success. And for me, I’ve benefited from feedback from the students, many of whom I’ve gotten to know through the writing course I’ve taught at F&ES over the last two years.

How well has the field of environmental journalism done in covering the important issues over the past few decades?


Cohn: I think it has been a very slow evolution, and environmental issues still haven’t gotten the place in mainstream media coverage that they should. Yes, there may be more environmental coverage now than 30, 40 years ago. But I still don’t think environmental issues are covered to the extent that they should be by the media in this country. And what is covered is not often covered with the kind of depth and rigor and attention to science that should be paid. Having said that, I am encouraged by the growth of non-profit, web-based environmental journalism, of which Yale Environment 360 has been a part.

Do today’s environmental journalists have the tools and the platforms to tackle the scale of the problem we’re facing?


Cohn: The online tools and platforms available for environmental journalists today has been a tremendously positive development. There are so many platforms and so much easier ways to reach people with the web, and all the tools that journalists have today — from online databases to gather information to interactive graphics to present it to the public. I think all this has helped us at e360 to make an impact in 10 years. An operation on our scale could not have had that kind of impact as a print publication because we wouldn’t have been able to get distributed anywhere near as widely as we are distributed now. With the variety of environmental journalism sites you have today, there aren’t just a couple of major media sources controlling what people see and read and hear. It has really opened up a whole new world.