A Furious Sky: How Hurricanes Have Shaped American History

From the nameless storms that threatened Columbus’s voyages in the 15th Century to the devastation wrought by Hurricane Katrina in 2005, Dolin says, hurricanes have helped shape U.S. history. In an interview, he discusses the legacy of some of the nation’s most significant storms, how communities have responded to these natural crises, and the prospect that climate change will make future storms more frequent and more devastating.

“Year after year I would read and watch news about hurricanes and their manifold, often tragic, impacts on the natural and human-made environment,” he said. “Writing about the history of hurricanes allowed me to more fully explore and understand these mighty tempests.”

How have hurricanes helped to shape American history?

Eric Jay Dolin: From a local or regional perspective, every hurricane has a devastating and long-lasting impact on the communities that are most directly affected. Thus, the histories of hundreds, if not thousands, of cities and towns have been molded by hurricanes. Some of those impacts leave scars that last for years, if not decades. 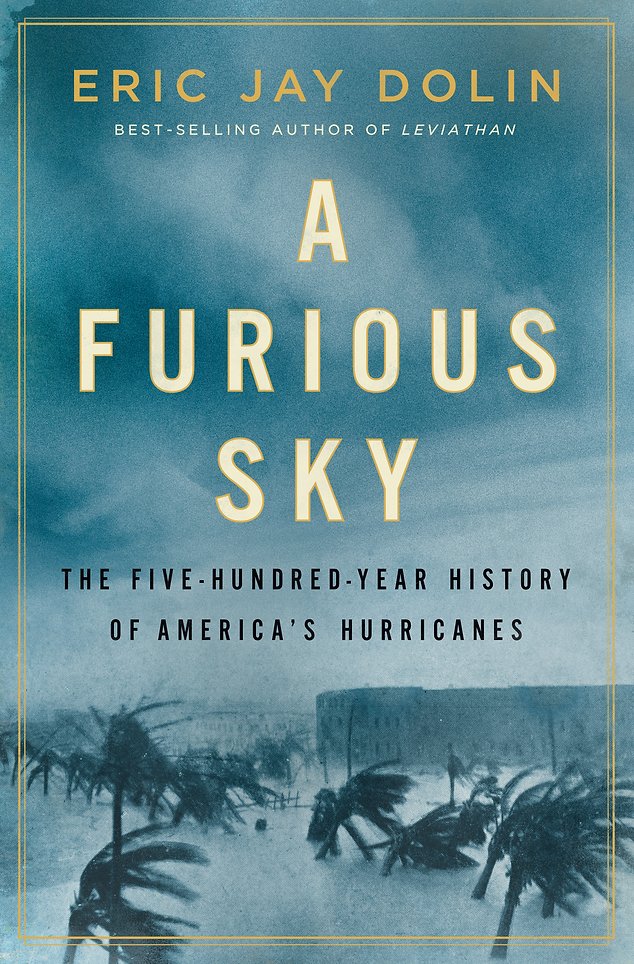 Consider, for example, Hurricane Katrina, which struck in August 2005, and ravaged parts of Florida, Mississippi, Alabama, and Louisiana, costing $125 billion, making it the most expensive hurricane ever to strike the United States. It left about 1,800 dead in Mississippi and Louisiana, with Louisiana claiming the lion’s share. Ground zero for Katrina, however, was the city of New Orleans, which suffered the most devastating blow. Multiple levee failures around New Orleans left 80 percent of the city submerged, with some areas covered to a depth of 10 feet or more. Hundreds of thousands of homes and businesses were inundated. Tens of thousands of people were stranded in their homes, which were filled with or surrounded by a toxic brew that one observer labeled “HazMat gumbo,” which contained all sorts of chemicals, bacteria, and contaminants. It took the better part of a week for a wide range of organizations and individuals to rescue or respond to the many thousands trapped in homes, hospitals, and businesses. It wasn’t until Monday, September 5, that the Army Corps finally closed all the levee breaches and, by October, the city was finally drained.

The hard work of recovery after Katrina began immediately. It was a monumental task which, years later, is still ongoing. An enormous number of bridges, roads, and piers were out of commission. In New Orleans alone, 134,000, or roughly 70 percent, of the housing units were damaged, while the comparable number for the Gulf Coast was 1 million. Many of those units were rendered uninhabitable. Tens of thousands, if not hundreds of thousands, of people suddenly were unemployed, their livelihoods literally blown away or drowned into oblivion. The loss of so many units and jobs caused the homeless population to explode. At the same time, population levels took a major hit, with the starkest change occurring in New Orleans, where the number of residents contracted by more than 50 percent and has not yet fully rebounded.

From a broader perspective, a number of hurricanes have had a lasting impact on American history writ large. For example, two strong hurricanes that swept through the Caribbean in 1780 destroyed numerous British and French warships, killed tens of thousands of people, and greatly affected the course of the American Revolution. Those hurricanes caused the French fleet to decide that staying in the Caribbean during hurricane season was too dangerous. So, when the next hurricane season rolled around in 1781, the French sailed north, both to avoid tangling with any more hurricanes and also to aid their American allies. By following this course of action, the French played a key role in the crucial Battle of the Chesapeake and the ultimate American victory over the British in the Battle of Yorktown, which ended when Lord Charles Cornwallis surrendered to George Washington on October 19, 1781.

Experts say it’s difficult to link individual hurricanes to climate change, but that we can expect to see an increase in such extreme weather events as a consequence of climate change. In your research, did you find evidence that this is indeed happening?

Dolin: Global warming has already made the impact of hurricanes worse. Because sea level has risen as a result of the thermal expansion of the oceans and the melting of glaciers, storm surges are higher and more destructive. As MIT professor Kerry Emanuel pointed out, “had [Tropical Storm] Sandy struck New York a century ago, there would have been substantially less flooding, as sea level was then roughly a foot lower.” Continued warming will only add to this problem.

A growing number of studies have found strong evidence linking global warming to increased precipitation during storms, including hurricanes. The reason is that warming leads to more evaporation, and warmer air is able to contain higher concentrations of moisture, which can come down as rain. One study concluded that “extreme precipitation, like that of Hurricane Maria, has become much more likely in recent years,” and that increases in atmospheric and ocean temperatures have probably contributed to that result. Three other studies taken together found that global warming likely made the precipitation during Hurricane Harvey anywhere from 8 to 38 percent heavier than would have been the case in a world where warming had not taken place. 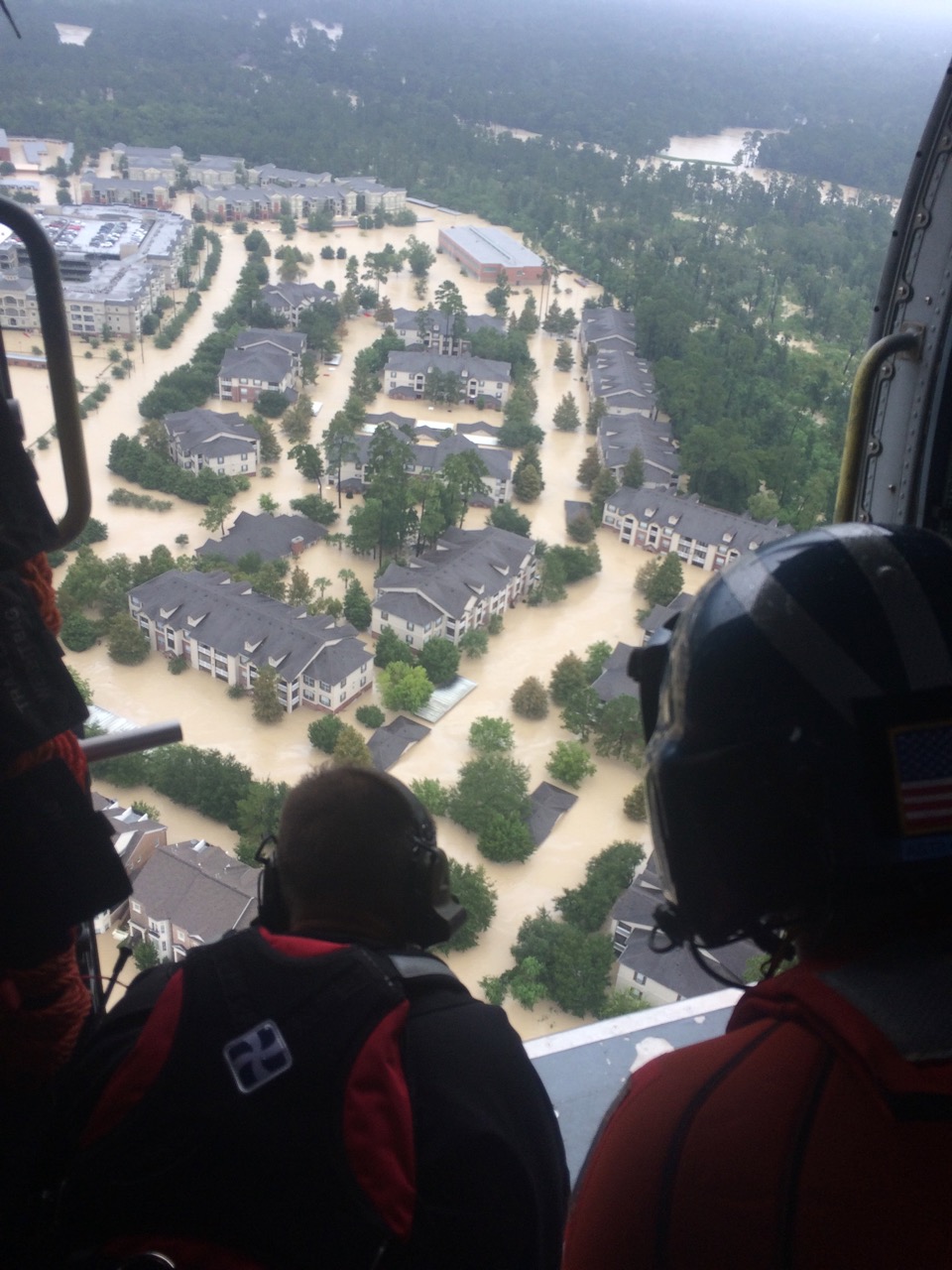 U.S. Air Force
An aircraft surveys the damage from Hurricane Harvey in 2017.
Considerable research also predicts that warmer oceans, which provide more heat energy to fuel hurricanes, will make the winds produced by these storms even more powerful. (Indeed, some observers believe that the uptick in the intensity of hurricanes over the past few decades, especially the greater-than-average number of severe Category 4 and 5 hurricanes, might be an indication that this is already happening.) Other studies show that the speed at which tropical cyclones, including hurricanes, travel over the Earth has slowed a bit since the mid-twentieth century, and although the researchers cannot conclusively attribute that slowdown to global warming, such a link is a distinct possibility.

If the continued warming of the atmosphere causes future hurricanes to linger longer, affected areas will be subjected not only to more prolonged, damaging winds but also to significant periods of increased rain. One simulation analyzed how 22 recent hurricanes might have been altered had they formed under the warmer conditions that predictions say will be the norm toward the end of this century. It concluded that, on average, the hurricanes would have moved more slowly, had higher maximum winds, and dropped a lot more rain. Another study suggests that a warmer atmosphere might result in fewer hurricanes, but that those that do occur will be more intense. And one analysis raises the possibility that global warming will reduce vertical wind shear along the East Coast of the United States, which typically acts as a brake on hurricane intensification. If such a reduction takes place, hurricanes occurring in that region in the future “may be much stronger than what we’ve experienced in the past.”

Despite the understandable desire to point to a clear, indisputable cause-and-effect link, at this moment nobody can say with absolute certainty exactly how hurricanes will change over time as a result of global warming. Scientists would be the first to admit that there are still many unknowns, as well as limitations in data and modeling, that make it exceedingly difficult to predict the impact of a warmer world on these massive storms. As Dr. Geert Jan van Oldenborgh of the Royal Netherlands Meteorological Institute noted, “The effect of climate change on hurricanes is horribly complicated. We’re working on it, but it’s very difficult.” The mounting and extremely persuasive scientific consensus that an increase in global warming will likely make future hurricanes worse, however, is not encouraging.

Since “A Furious Sky” focuses on hurricanes, it does not consider the many other serious threats to our future posed by global warming and, more broadly, climate change — among them the increased frequency of droughts and heat waves, shifts in agricultural zones, coral bleaching, and an uptick in the number of “climate refugees.” I believe that these and other threats make it imperative that society take serious action to reverse global warming.

What does this say about the future? What are some of the ecological implications?

Dolin: If hurricanes of the future are stronger and wetter as a result of global warming, they will be more destructive of both the human and natural environment. However, if habitats and their animal populations only had to face more destructive storms they would be able to adapt and survive, even if they were greatly injured in the near-term. After all, Mother Nature has been contending with hurricanes since time immemorial, and has great powers of rejuvenation.

But those habitats and animal populations do not exist in isolation. They are intermingled with humans and the world they have built — that creates added dangers. Hurricanes with higher winds and greater deluges will, by definition, destroy more of the human landscape, and that means the more toxins and human detritus will be released into the environment. Oil, gas, cleaning chemicals, and waste from livestock pens, as well as overflow from landfills, sewage systems, and hazardous waste sites, along with building debris can be swept into the raging waters. Decomposing animal carcasses and human corpses are often also added to the churning mix. Such increased assaults will only make the ecological implications of hurricanes that much worse than they already are.

Why should people read this book?

Dolin: “A Furious Sky” provides a fascinating, fast-paced, dramatic history that is fun and informative to read. It uses hurricanes as a narrative backbone to tell a broader story about the American experience. While at its core the book is about the hurricanes themselves, it is also weaves together a great range of captivating themes. There is the intriguing and, at times, rather contentious history of meteorology. The influence of hurricanes on the course of empire, the outcomes of war, and the fortunes of individuals adds to the story. And critical innovations in communication, aviation, and computer and satellite technology play an important part, as does the women’s movement and its role in the naming of hurricanes.

It also provides a context for moving ahead. It is my strong belief that understanding history enables all of us — the general public, scientists, and policymakers alike — to better deal with whatever the future might bring. To that end, I hope that this book will help all of us confront the thorny questions of how we can learn to survive and adapt to the continued barrage that is sure to come from the greatest storms on Earth.