Achieving a ‘Natural Advanced State’:
Reflections of an Apprentice Forester

Joint-degree student Andy Beck had never even used a chainsaw before arriving at F&ES, but now he’s pursuing a forestry degree — and even spent the summer as an apprentice “forester” at Yale Myers Forest. In an interview, he describes why he decided to become a true “forester” and how his decisions will have long-term impacts on the landscape.
By Michelle Winglee
Andy Beck ’18 M.F./M.B.A. came to the Yale School of Forestry & Environmental Studies (F&ES) with little exposure to the field of forestry. Inspired by the School’s tradition as one of the nation’s first forestry schools, field-based classes that took him into the woods, and the expertise of Yale’s faculty, the Vermont native is now pursuing a Masters in Forestry degree along with a degree from the Yale School of Management. 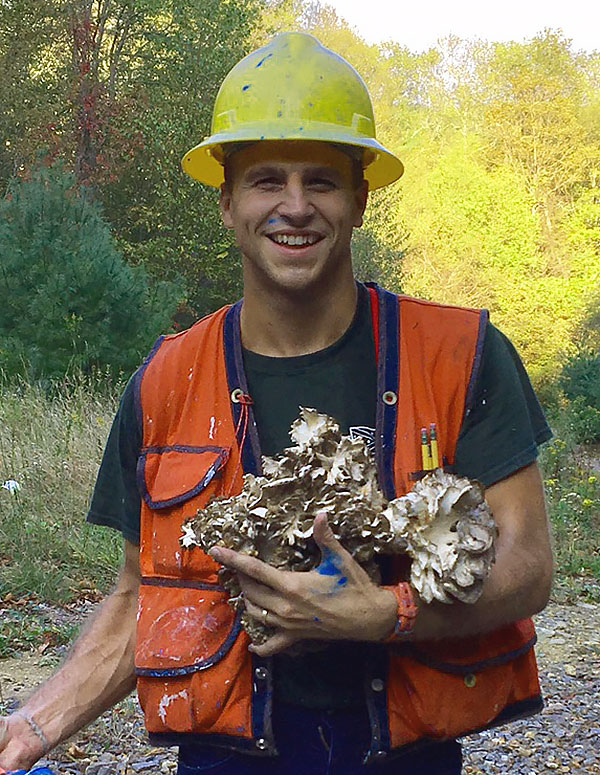 Andy Beck with hen of the woods mushrooms, which he stumbled across while marking trees at the Yale Myers Forest.
Last summer, Andy joined the Apprentice Forester Internship Program, or the “Forest Crew,” at the school-owned Yale Myers Forest. We chatted with him about his experience and what it means to be a “Forester.”

What motivated you to join the forester apprenticeship program?

Forestry is not just a science it’s an art, so getting out into the field is critical to building expertise.You don’t get a sense for the art of it all until you’re out in the middle of a stand of trees. For that reason,spending as much time as possible in the Yale forests has been an important part of my time at F&ES. It’s a unique forest in that it’s been owned by Yale and operated by its academics for 100 years. It’s a place of academic instruction and research, while being a working forest. [A working forest means that trees are harvested for income.]

Forest Crew was an opportunity to try stuff out and get some real “boots on the ground” experience. I’ve worked with forested land in different ways, but I’ve never been fully responsible for managing it. That’s something Iaspire to in my career and this apprenticeship helped fill that gap. I had never used a chainsaw before. I had never marked a treefor harvest. The decision to cut down a tree leaves a lasting mark on the landscape. If I could come back in 150 years, the forest composition would be, in part, a function of the decisions that I made. 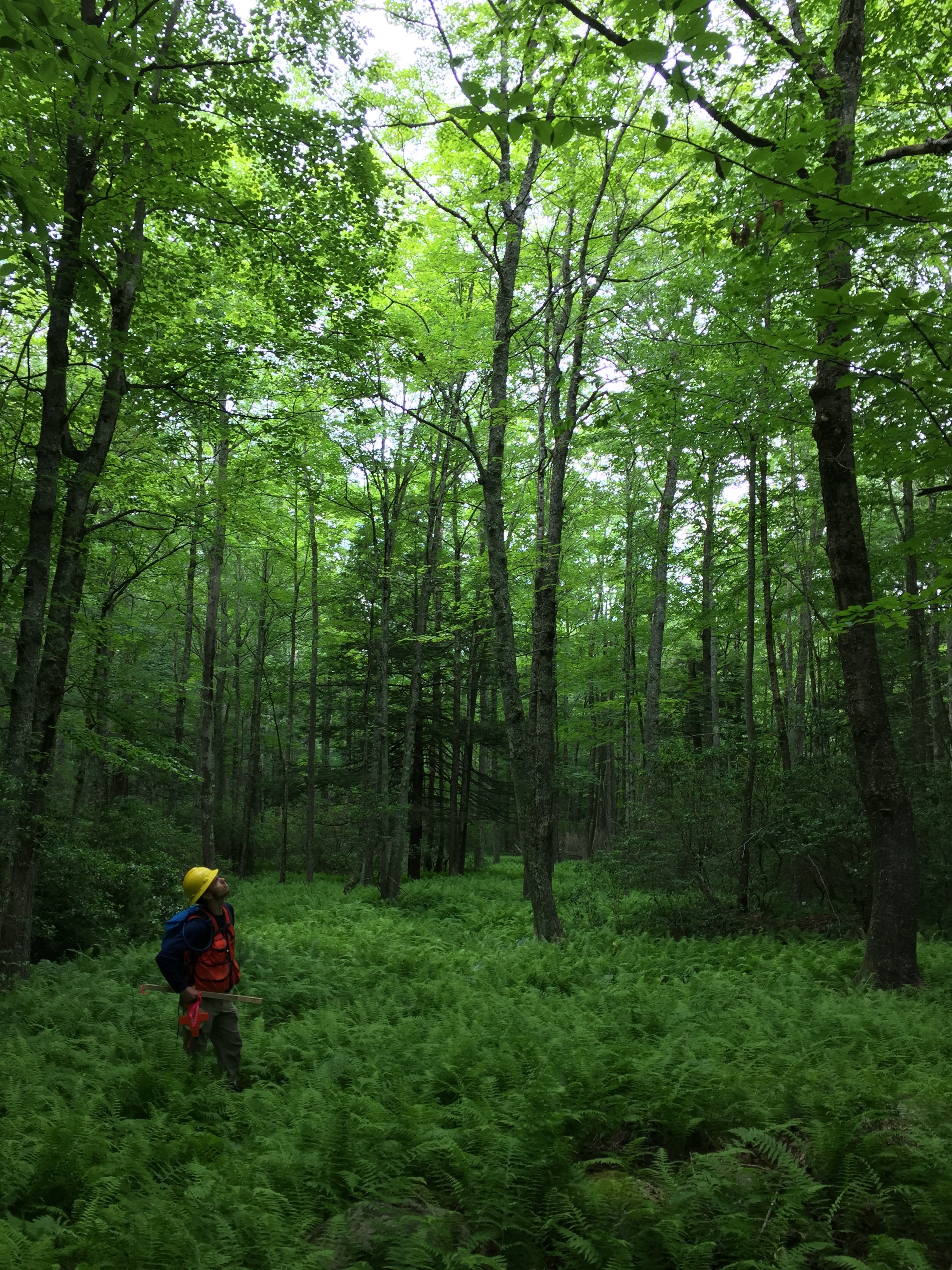 Nick Biemiller '18 M.F., a member of the Forest Crew, observes the canopy at Yale Myers Forest. Foresters try to understand forest interactions and determine how trees will respond to natural or human caused disturbances.

Wow. No pressure. How did you make the decisions of what to cut down?

The decisions were based on what we learned in classes during the year and from intensive instruction at the start of the program. Deciding which trees to leave or which to cut depends largely on the ownership of the forest.If an owner is looking to maximize their short-term revenue they might choose to cut down more white oaks — a tree highly valued for its timber. But we often choose to leave white oaks to grow because they are also highly prized by wildlife for their acorns. The decisions depend on what the landowner wants.

Why learn about forestry? Why not just grow a tree farm and cut trees from there?

Silviculture is the practice of understanding how a forest is going to grow. The forests of the Northeast are very complex. You’ll see all different kinds of trees — hemlocks, red and white oaks, birches, ashes, and even aspens — and the forest dynamic is extremely complicated. If you go in and clear-cut the trees in Connecticut, you won’t necessarily get the same ones back that you cut. In other areas like the Southeast, clear-cutting pine trees is precisely how you regenerate that kind of forest.

The way forestry is practiced at the Yale School Forests is trying to mimic as closely as possible the way that nature would interact with the forest to try to keep what is already there, while also meeting other objectives such as harvesting timber to pay the taxes on the land. Good forestry requires understanding the forest’s succession, how different trees grow as function of light, water, soil, the underlying bedrock geology, and figuring out how to get what you want out of the land. We’re not just going and taking down a bunch of trees, we’re choosing each one carefully so that we create a sustainable way of keeping the forest in its natural advanced state.

Michelle Winglee ’19 M.E.Sc. is a first-year student at the Yale School of Forestry & Environmental Studies.