‘I Came Here to Teach’: Forestry Professor
Camp Retires After 17 Years at F&ES 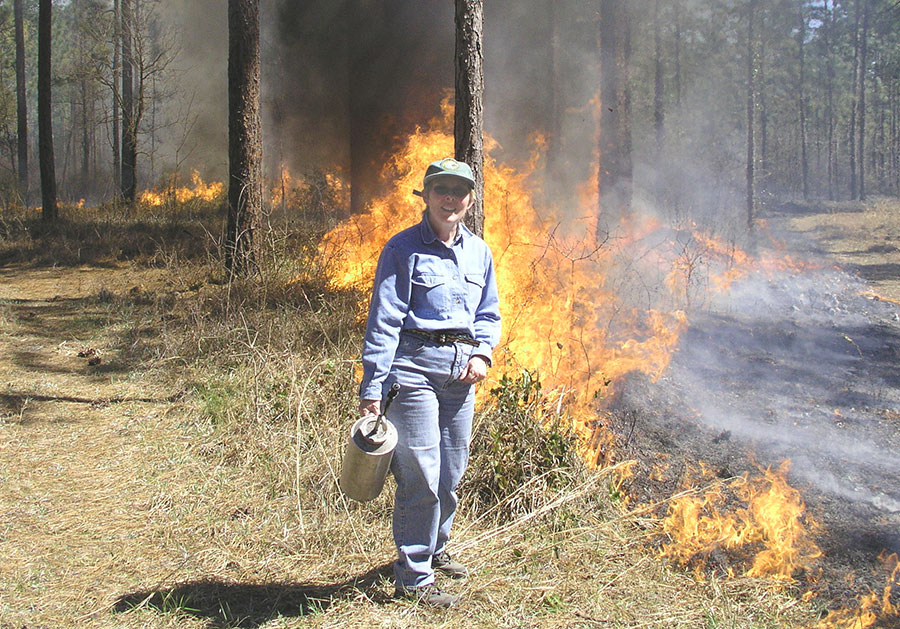 Ann Camp, an expert in fire science, lights a controlled burn that will reduce the likelyhood of catastrophic fire and improve forest health.
When asked to lead the annual Southern Forestry Field Trip for the Yale School of Forestry & Environmental Studies [F&ES], Ann Camp ‘90 M.F.S. initially was reluctant to take on the project for one basic reason: she had never visited the South.

“The first trip was to Mississippi,” she recalled during a recent interview. “I’d never been there before. But with help from the Society of American Foresters [SAF], we reached out to landowners and foresters and put together a trip that allowed students to see industrial clear cuts and different styles of management from the boutique forestry of the Northeast.”

Under Camp’s leadership, the trips have become a fixture at F&ES and are so popular that they’re routinely wait-listed. In addition to visiting large-scale tree plantations and non-industrial private landholdings, students tour mills, meet with alumni, and learn about the ecology of the South, for example at Congaree National Park. But Camp says that the trips also served as a sort of cultural exchange for both students and Southern foresters.

“Some landowners would come right up and say they don’t believe in climate change,” she said. “But we had in common that they loved the land and we loved the land, so we were able to find common ground.”

Camp recently retired from F&ES where she served as a lecturer and research scientist for nearly 17 years. In addition to teaching courses in forest dynamics, fire science, entomology, pathology, and invasive species, she served as assistant director of Yale School Forests.

“Ann has the uncommon skill of being able to relate her scientific expertise to aspiring practitioners and scientists,” said Mike Ferrucci ‘81 M.F., a forester and former colleague who co-led the Southern Forestry Field Trip. “This skill, coupled with her passion for teaching, contributed to her well-deserved reputation as a forestry professor from whom to take multiple and often quite-varied courses. The hole in our program left by her retirement will not be easily filled.”

Indeed, Mark Ashton ‘85 M.F., ‘90 Ph.D., a professor of silviculture and director of Yale School Forests, has called Camp “the main engine of the Master of Forestry program.”

After receiving her master’s degree from F&ES, Camp earned a Ph.D. in silviculture from the University of Washington where she worked under Chadwick Oliver ‘70 M.F.S., ‘75 Ph.D., now a professor of forestry at F&ES and director of Yale’s Global Institute of Sustainable Forestry.

“The pleasure of Ann is that she sets an understated, positive tone of professionalism and ‘can-do,’ but does it with such matter-of-fact modesty that she brings out the best in others,” Oliver said.

Camp’s dissertation on late successional fire refugia — or places that are less disturbed by wildfire — in fire-regulated landscapes has informed forest management throughout the West. Published at the height of the spotted owl controversy, her research helped provide guidelines for where fire could be incorporated into management plans for old growth stands — critical habitat for the threatened species.

Heidi Hurd ‘17 M.E.M., a midcareer master’s degree student and professor of law and philosophy at the University of Illinois, says Camp is a kind and supportive teacher who holds her students to demanding standards. “This combination of uncompromising rigor and frankly-expressed respect for work well done inspires students to dig deep to meet her expectations,” she said. “I wish I could teach just like her!”

Another former student, Helen Poulos ‘07 Ph.D., now a professor of environmental studies at Wesleyan University, also appreciated her advising style. “She really allowed me to cultivate my own ideas and run with them,” she said. “I wrote and got a major grant with her to fund my dissertation research, which is something few students do. It allowed me to buy a truck and hire a four-person field crew for all of my fieldwork. I got seven published papers out of my dissertation instead of the usual three because of that.”

Although many F&ES students pursue courses in leadership, Camp insists they still need a solid grounding in ecology. “You get tenure by being an expert in a small area, but as practitioners, students need broad education from ecology through economics and policy,” she said. “The first thing I tell my students is that forestry and fire are both social sciences. It’s true with any social science you have to understand how to communicate to a non-scientific audience that cares. You’re not going to just win people over with facts.”

For 10 years, Mary Tyrrell ‘97 M.F.S., executive director of Yale’s Global Institute of Sustainable Forestry, co-taught a course on invasive species with Camp. “I really appreciated her critical thinking about a complex and evolving field, and her dedication to fostering an atmosphere of discussion and openness to ideas in the classroom,” she said. “I will miss her as a colleague and office neighbor.”

In retirement, Camp says she’s looking forward to having more time to attend talks and cultural events at Yale. She also competitively trains three Portuguese Water Dogs, is an avid kayaker, and loves the Metropolitan Opera. But she will also continue to work as a forestry consultant, including with former students who have gone on to illustrious careers.

“I want my students to be successful,” she said. “I’m not looking to have my name on a lot of papers. I’m last year’s news; they’re tomorrow’s. I just want to give them the knowledge and skills to do damage to the status quo, to go out there and really make a difference.”

“Ann is a complete person who set a tone here for students to follow,” said Oliver. “Be professional and knowledgeable, be positive, help others in little and big ways, lead or follow depending on what the situation calls for, have fun while doing it all, and don’t forget to socialize.” 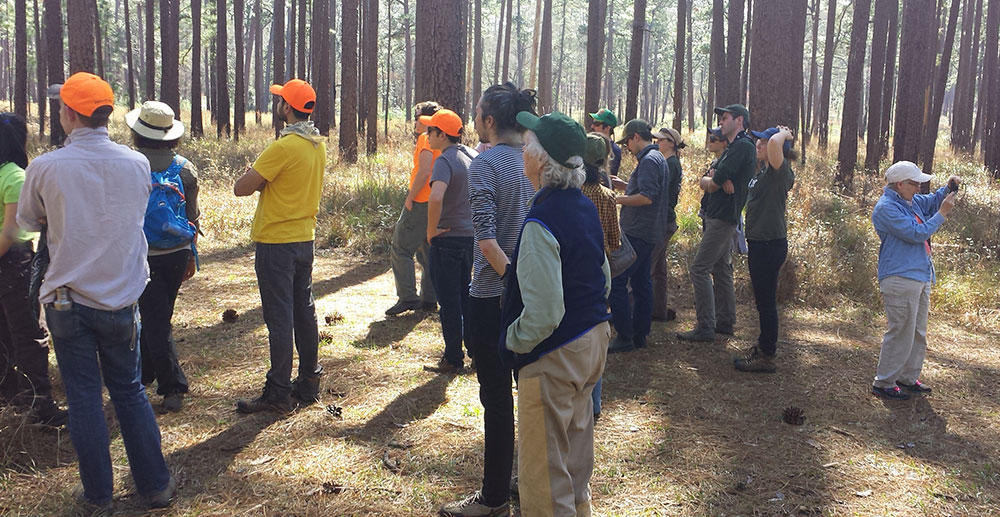