Bell Elected to the Prestigious National Academy of Medicine 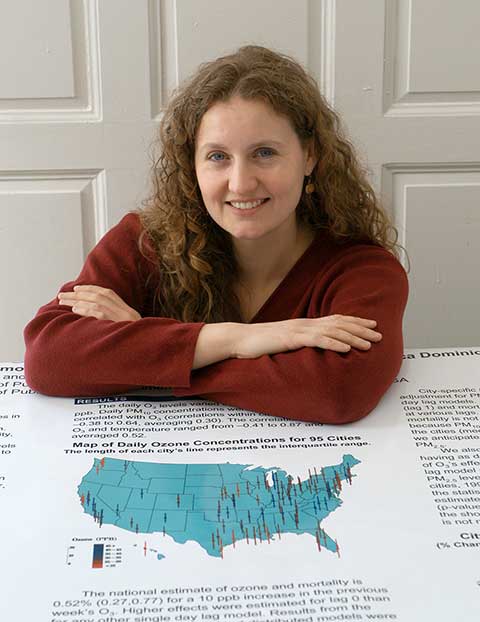 Michelle Bell, the Mary E. Pinchot Professor of Environmental Health at the Yale School of the Environment (YSE), was elected today to the National Academy of Medicine (NAM), one of the highest honors in the fields of health and medicine, recognizing individuals who have demonstrated outstanding professional achievement and commitment to service.

“It’s a great honor,” says Bell, who also holds a secondary faculty appointment at the Yale School of Public Health. “It’s particularly humbling to be chosen at a time when there is growing recognition of the work performed by those in the public health field — work that is improving and saving lives.”

Daniel Colon-Ramos, a professor of neuroscience and cell biology at the Yale School of Medicine, was also elected to NAM this year.

“This election recognizes the far-reaching impact of Michelle’s research and scholarship, which sets the standard for how we understand the critical links between the environment and public health,” said YSE Dean Indy Burke. “This honor is incredibly well deserved; we are so proud that Michelle is part of the YSE community.”

Bell’s research focuses on how human health is affected by environmental conditions, including air pollution, weather, and climate change, and also examines environmental justice. Her work, which is largely based in epidemiology, biostatistics, and environmental engineering, is designed to be policy-relevant and contribute to decision making that better protects human health and benefits society.

Bell is the director of the EPA-funded SEARCH (Solutions for Energy, Air, Climate, and Health) Center at YSE, which partners with peer institutions to investigate emerging energy transitions in the U.S. and resulting air pollution and health outcomes that contribute to emissions, air quality, and health. She also directs a major National Institutes of Health (NIH) project on environmental justice.

Bell’s research team focuses its efforts on the world’s most pressing public health challenges, including climate change and environmental justice. Recently, Bell and her team have published research on the relationship between COVID-19 and air pollution; the different impacts of the pandemic on scientists by gender; links between urban greenspace and health; and the human health impacts of wildfires and extreme weather events in the U.S.

In recognition of her work, Bell has received the Prince Albert II de Monaco/Institut Pasteur Award, the Rosenblith New Investigator Award, and the NIH Outstanding New Environmental Scientist (ONES) Award. In 2019, she was elected to the Connecticut Academy of Science and Engineering. She was also identified as one of the world’s most highly cited researchers (top 1 percent). She holds degrees from the Massachusetts Institute of Technology, Stanford University and Johns Hopkins University, and is on track to soon complete a master’s degree in philosophy from the University of Edinburgh.

“I take interdisciplinary work very seriously; it’s what attracted me to come to Yale,” Bell says.  “I also deeply appreciate that YSE is a place where we use science to make real-world impact to create a better world.”