Bell, Lauenroth Elected to Connecticut
Academy of Science and Engineering

Michelle Bell, a professor of environmental health at the Yale School of Forestry & Environmental Studies (F&ES), and William Lauenroth, a drylands ecologist and professor in the practice at F&ES, have been elected to the Connecticut Academy of Science and Engineering. 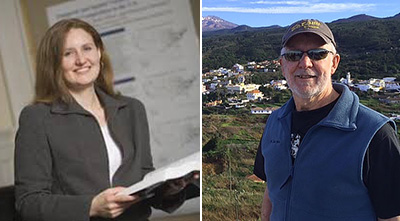 Michelle Bell, left, and William Lauenroth
Bell, the Mary E. Pinchot Professor of Environmental Health, studies how human health is affected by atmospheric systems, including air pollution, weather, and climate change, and examines issues related to environmental justice. Her work, which is largely based in epidemiology, biostatistics, and environmental engineering, is designed to be policy-relevant and contribute to decision-making that better protects human health and benefits society.

She was cited for critical advances in our understanding of how air pollution affects human health, how weather conditions have affected health — including mortality and hospital admissions — and how heath is affected by the complex systems of urbanicity (the impact of living in a city at a given time), green space and vegetation, social and economic systems, as well as traditional environmental exposures.

Lauenroth, a pioneer in the field of drylands ecology, has conducted extensive research in the U.S., South America, and Asia. While much of his past work has focused on grasslands, he also addresses questions associated with mixtures of grasses and shrubs. He also studies the potential impacts of climate change on plant communities and ecosystems in the U.S. West.

He was recognized for outstanding contributions to our understanding of the plant populations and community ecology of dryland ecosystems across the planet — including the role of grazing management to the health of these vital ecosystems.

Before coming to Yale in 2016, Lauenroth was a professor in the Department of Botany at the University of Wyoming (UW). He still holds appointments at UW and Colorado State University.

Bell and Lauenroth were among 24 leading experts in science, engineering, and technology elected to the academy this year. Thirteen are from Yale. The new members will be introduced at the academy’s 44th annual meeting and dinner on May 28 in Cromwell, Conn.

Election to the academy is based on scientific and engineering distinction, including through contributions to theory or applications, leadership of nationally recognized teams, and external professional awards.