A new Yale-led study of fungi competition illustrates that maintaining a diverse collection of species indeed not only safeguards weaker species but also protects the genetic diversity of the larger community.
If you pit a pair of gladiators, one strong and one weak, against each other 10 times the outcome will likely be the same every time: the stronger competitor will defeat the weak. But if you add into the field additional competitors of varying strength levels, even the weakest competitors might be able to survive — if only because they’re able to find a quiet corner to hide.

The same is true in the natural world, where in some ecosystems species compete with others for the space to survive and reproduce, according to a long-held scientific theory.

In a new study Yale researchers illustrate that, in the case of fungal communities, maintaining a diverse collection of species indeed not only safeguards weaker species but also protects the genetic diversity of the larger community.

Or, as the researchers suggest, biodiversity begets biodiversity. Understanding this phenomenon, they say, will help in efforts to protect some of the world’s most threatened ecosystems, including coral reefs.

“The most competitive species will surely overcome most other species,” said Dan Maynard, a doctoral student at the Yale School of Forestry & Environmental Studies (F&ES) and lead author of the study. “But if there is an abundance of other species in the community, they will likely run into a group of others that it can’t defeat entirely, resulting in deadlocks or draws. And in the space weaker species will be able to survive, scattered across the landscape.”

The study is published today in the journal Nature Ecology and Evolution. 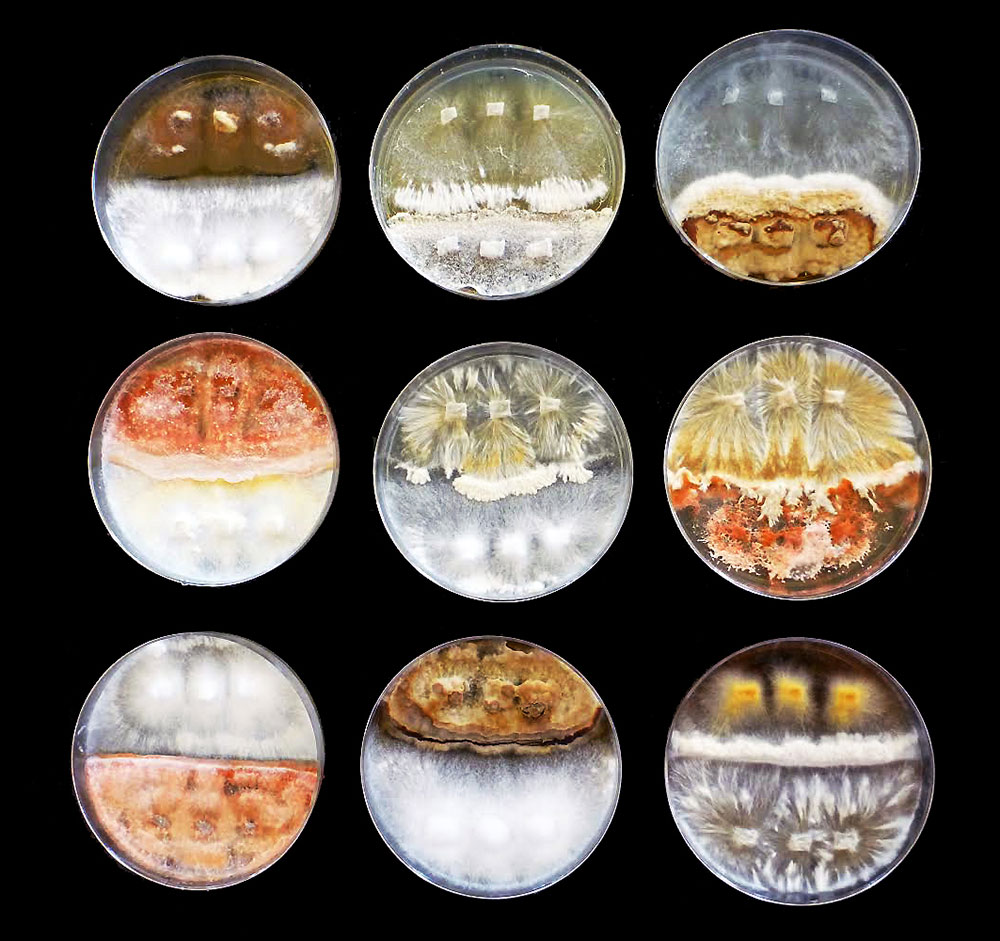 In a series of paired interactions, the most competitive fungus was Phlebiopsis flavidoalba, which is the top fungus in the upper right corner of the photo. One of the least competitive was Armillaria tabescens (not shown), and one of the strongly-defensive species that deadlocked in most of its competitions was Phellinus hartigii, which is the top brown fungus in the middle dish on the bottom row.
For the study, the researchers observed interactions between 37 distinct types of wood-decay fungi, which are any species of fungi that grow on dead wood. Unlike other plants, fungi species grow toward other species and compete for space. “They’re much more like territorial carnivores,” Maynard said. “They have a territory from which they gather resources, and they want to protect that territory very strongly.”

In a series of experiments the researchers placed pairs of fungal species on opposite ends of a 10-centimeter Petri dish — more than 600 separate combinations — and then watched as the opposing species grew toward the empty space in the middle. Typically the fungi would meet near the center after about 20 days, after which they would begin an “interference competition” in which each species sought to overtake the other and claim available space.

Often the competitions would end in a stalemate. But in many cases the stronger species would overtake the other, growing on top of and then decomposing the weaker species.

The researchers then ranked the competing species based on a variety of traits — including how fast they grew, the density of their biomass, and the types of enzymes they produced (which presumably were used to eliminate each other). They noticed that those species that grew fast, developed greater density, and produced more varied enzymes were most successful overall.

Once they ranked the species in terms of their relative strengths and competitive traits, they modeled how they would compete within a larger community comprised of many different interacting species.

They then ran those results through a simulation model that predicted how the different species would perform within larger, more diverse communities — including, for example, landscapes including three, five, 10 and more additional fungi species.
“These ‘rock-paper-scissor’ relationships — in which each species has different strength and weaknesses — actually negate the hierarchical gladiatorial competitions and allow really weak, really dissimilar species to survive.”
— Dan Maynard
According to their results, common traits emerged among species that were able to dominate single competitors — just as strong gladiators all presumably shared similar competitive strategies and traits. But when additional species were added to the community, those competitive advantages meant less, allowing even the weakest species to maintain a foothold.

One key factor allowing these weaker species to survive was that the fungi exhibited many different competitive strategies; essentially, it turns out there is no overall “best” strategy. Instead, just as with the game of “rock-paper-scissors,” the success of any single strategy depended on what strategy the opponent used.

For instance, while the most competitive fungal species tended to grow fast, an effective offensive strategy, the researchers found that other species were more adept at playing defense. Some fungal species, for example, tended to remain fixed in one location, developing a dense biomass that became difficult to overcome even by the best offensive competitors. In so doing, these defensive fungi created a buffer between the stronger species and a weaker species. (By contrast, losing even 20 or 30 percent of species can trigger an accelerated loss of biodiversity in a system.)

“Our conclusion was that these ‘rock-paper-scissor’ relationships — in which each species has different strength and weaknesses — actually negate the hierarchical gladiatorial competitions and allow really weak, really dissimilar species to survive.”

Maintaining this variety of species, the researchers say, also protects a variety of traits, behaviors, and interactions, which can improve the survival prospects of an entire community. For instance, in the event of a major ecological threat, it might turn out that the “weaker” species are better equipped to survive.

“If you have just a monoculture with only one species, even small changes in the environment can cause that single species to die off completely,” Maynard said. “But if a community experiences a change in the climate, for instance, there is a greater chance that at least one species will be able to respond and adapt appropriately.”

The implications of the research are particularly relevant when considering coral reef ecosystems where, like fungi, species compete with one another for space through “overgrowth and displacement” strategies — and where in some cases biodiversity has diminished by environmental changes, including ocean acidification and human development.

“Perhaps the most significant result from a conservation perspective is that maintaining a rich diversity of species may itself be an effective strategy for protecting against loss of biodiversity,” said Mark Bradford, professor of terrestrial ecosystem ecology at F&ES and another author on the study.

“Understanding such factors that protect diversity in these endangered ecosystems are critical challenges over the coming century,” Maynard said.

Other authors include Thomas Crowther, a former postdoctoral fellow at F&ES who is currently at the Netherlands Institute of Ecology.
– Kevin Dennehy    kevin.dennehy@yale.edu    203 436-4842