A new analysis led by the F&ES-based Yale Center for Business and the Environment (CBEY) finds that renewable thermal technologies have significant market potential in the state if supported by appropriate public policy and financing tools.

Though a mature technology, renewable thermals occupy a small niche in Connecticut — and in the U.S. at large. A new Yale-led study analyzes the market potential of this technology across the state and provides key insights into spurring consumer demand.

According to the analysis, led by the Yale Center for Business and the Environment (CBEY), renewable thermals have significant market potential in the state if supported by appropriate public policy and financing tools. Renewable thermal technologies comprise a range of products — from solar water heaters to district energy systems — all designed to use renewable energy in the cooling of space and the heating of both space and water. 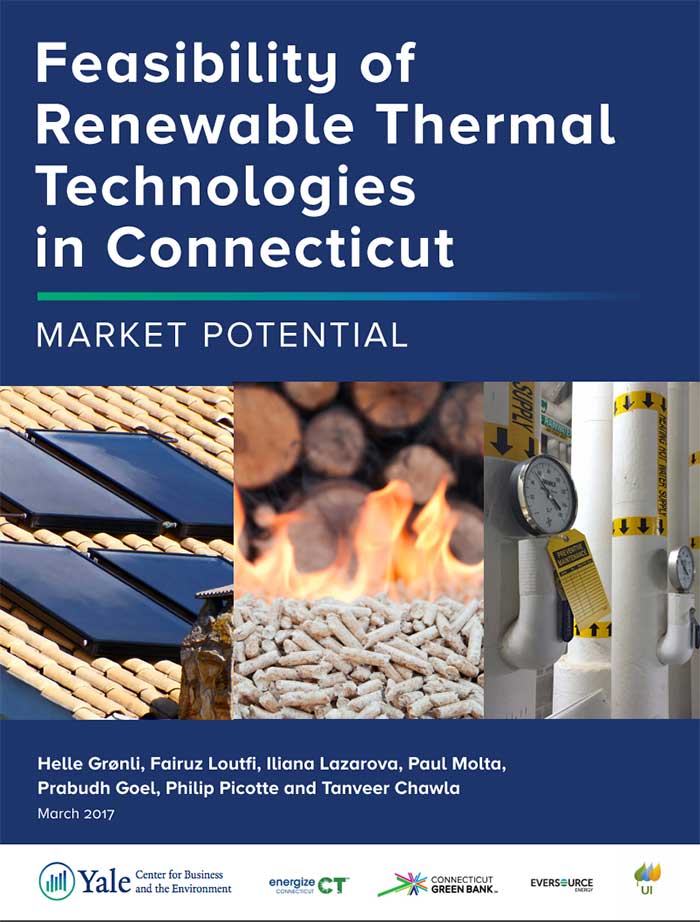 Collectively, the use of energy for thermal purposes accounts for roughly one-third of all U.S. energy consumption. In Connecticut, over 60 percent of the energy used in residential and commercial buildings is for space heating and cooling; this demand, combined with the energy used to heat water, account for 30 percent of the state’s greenhouse gas emissions. Switching from conventional fossil fuel providers of thermal energy to RTTs could offer significant cuts in greenhouse gas emissions — of particular relevance as Connecticut aims to reduce emissions to 80 percent below 2001 levels by 2050.

“Renewable heating and cooling are not as visible or high profile as renewable electricity, but holds an enormous reservoir of possibility for utilizing local resources to off-set fossil fuels. Like renewable electricity, renewable heating and cooling need supportive policies and financing products to kick start a viable market,” says Helle Gronli, associate research scientist at the Yale School of Forestry & Environmental Studies (F&ES) and director of the Feasibility of Renewable Thermal Technologies in Connecticut project (FORTT).

The FORTT team is based at CBEY and is part of a larger coalition that includes the Connecticut Department of Energy and Environmental Protection, Eversource Energy, the United Illuminating Company, and the Connecticut Green Bank.

The first part of the study analyzed the market potential of RTTs in Connecticut through 2050. The findings suggest that RTTs could competitively serve 19 percent of thermal demand in buildings across the state. Annually, this represents the curtailment of 1.4 million tons of CO2e emissions. However, realizing Connecticut’s overall goal requires a considerably higher rate of RTT deployment than what currently is found competitive.

The second part of the study, more behavioral in nature, revealed existing barriers and drivers that influence whether or not consumers choose to adopt renewable thermal technologies. Through a series of in-depth interviews across the range of RTT stakeholders, the findings revealed interventions needed to establish a marketplace in which RTTs are both viable and trusted alternatives to non-renewable technologies. The results can be distilled into four core insights:

“In order for us to achieve our long-term climate change strategies in Connecticut, we are going to need to scale-up the deployment of renewable thermal technologies in households and businesses throughout the state,” said Bryan Garcia, President and CEO of the Connecticut Green Bank. “By working together with Avangrid, Eversource, and Yale we can attract private investment to scale-up the deployment of renewable thermal technology while creating jobs and helping consumers.”

On the supply side, the study shows that clear policy guidelines and standardized regulatory processes are needed to build a fluid and efficient RTT market.

Among consumers, RTTs tend to suffer from a deficit of awareness. Marketing campaigns to raise their profile, similar to Connecticut’s recent “Solarize” campaign, could go a long way to increasing demand and lowering soft costs. These efforts could be paired with financial tools, whether block grants or leasing agreements, to help defray upfront installation costs — one of the central barriers to adoption.

“This report builds our understanding of the work that’s needed to support the deployment of renewable thermal technologies in Connecticut,” said Rob Klee, Commissioner of Connecticut’s Department of Energy and Environmental Protection (DEEP). “Developing a sustainable market for renewable thermal technologies will help us reach Connecticut’s climate change goals as part of the work of the Governor’s Council on Climate Change, while at the same time advancing implementation of our Comprehensive Energy Strategy.”