Burke, Seto Elected to Connecticut Academy of Science and Engineering

Ingrid C. “Indy” Burke, a professor of ecosystem ecology and dean of the Yale School of Forestry & Environmental Studies (F&ES), and Karen C. Seto, a professor of geography and urbanization science at F&ES, have been elected to the Connecticut Academy of Science and Engineering. 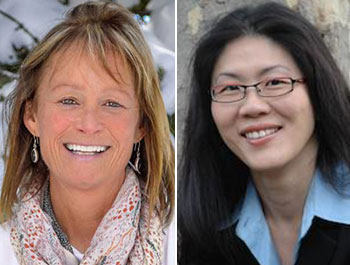 Indy Burke, left, and Karen Seto
Burke, who was named Carl W. Knobloch, Jr. Dean at F&ES in 2016, is an ecosystem ecologist whose research has focused on carbon and nitrogen cycling in semi-arid rangeland ecosystems. Burke, who came to Yale from the University of Wyoming, where she was dean of the Haub School of Environment and Natural Resources, has received more than $20 million in grant support for research and published more than 150 peer-reviewed articles, chapters, books, and reports.

Her work with graduate students, postdoctoral associates, and colleagues has addressed how drylands are influenced by land use management, climatic variability and regional variability. She has taught in the fields of environmental science, ecosystem ecology, and biogeochemistry.

She is also senior associate dean of research at F&ES and is director of the F&ES Doctoral Studies program.

Burke and Seto were among 24 leading experts in science, engineering, and technology elected to the academy this year. Ten are from Yale. The new members will be introduced at the academy’s 43rd annual meeting and dinner on May 24 at the Radisson Hotel in Cromwell, Conn.

Election to the academy is based on scientific and engineering distinction, including through contributions to theory or applications, leadership of nationally recognized teams, and external professional awards.

The Connecticut General Assembly chartered the academy in 1976.