A new Yale study predicts that a transition to timber-based wood products in the construction of new housing, buildings, and infrastructure would not only offset enormous amounts of carbon emissions related to concrete and steel production — it could turn the world's cities into a vast carbon sink.
By Kevin Dennehy 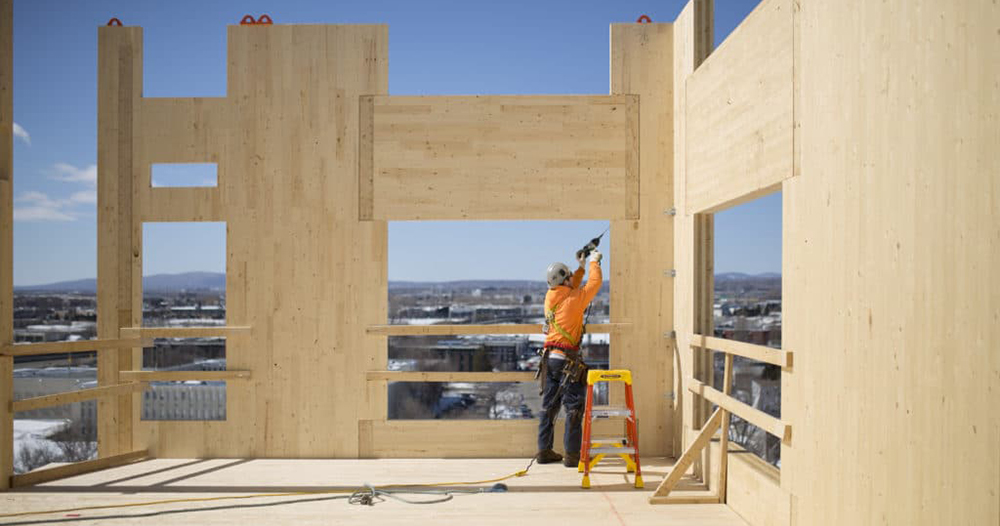 Photo by Stephane Groleau/Courtesy of Think Wood
Construction of the 14-floor Origine, in Quebec, which is the tallest all-wood condominium building in North America.
The steady rise of the world’s urban population will drive an immense demand for new housing, commercial buildings, and other infrastructure across the planet by midcentury. This building boom will likely escalate global carbon emissions to dangerous levels and intensify climate change — particularly if it relies on traditional materials such as concrete and steel.

But if society is able to use more wood-based products to meet this building demand, this urban growth might actually present an opportunity to mitigate climate change, according to a new paper led by researchers at Yale and the Potsdam Institute for Climate Impact Research (PIK).

Writing in the journal Nature Sustainability, a multidisciplinary team of researchers and architects predicts that designing mid-rise urban buildings with engineered timber — rather than relying mainly on carbon-intensive materials — has the potential to create a vast “bank vault” that can store within these buildings 10 to 68 million tons of carbon annually that might otherwise be released into the atmosphere. 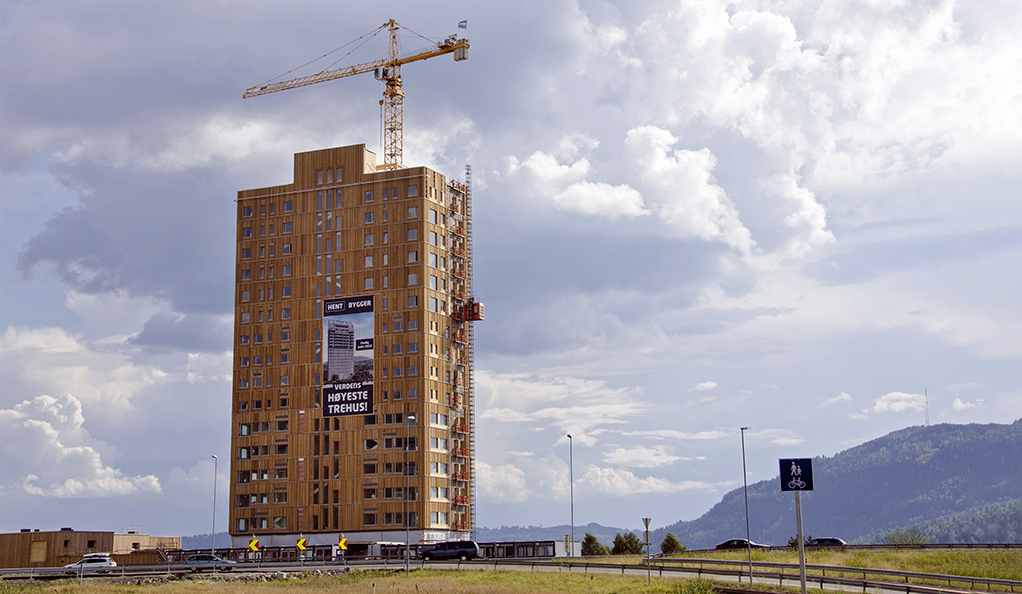 Photo by Øyvind Holmstad via Wikimedia Commons
The Mjøstårne, an 18-floor building consructed with timber, in Norway.
Simultaneously, society would drastically reduce carbon emissions associated with the construction sector, said Galina Churkina, who led the collaborative research while she was a visiting fellow at the Yale School of Forestry & Environmental Studies (F&ES).

“Since the beginning of the industrial revolution we have been releasing into the atmosphere all of this carbon that had been stored in forests and in the ground,” said Churkina, who is a senior scientist at PIK. “We wanted to show that there can be a vision for returning much of this carbon back into the land.”

Beyond that, achieving a large-scale wood-based construction sector has the potential to create a new “symbiotic relationship” between natural systems and cities, said Alan Organschi, another author, from the Yale School of Architecture and Gray Organschi Architecture in New Haven.

“The city would become a carbon sink rather than a carbon source,” he said. “We would essentially be storing the carbon that would otherwise be combusted for energy or aerobically digested on the forest floor and allowing the forest to ‘continue’ in this restorative, carbon-absorbing system.”

Although the practice of building with wood dates back to ancient times, the use of heavy, solid timber began to wane as steel and reinforced concrete technologies and techniques became cheaper and more reliable in the late 19thcentury. For larger projects, meanwhile, the use of wood became increasingly unpopular for many reasons, including the variant nature of wood products, the absorption and desorption properties that can change the shape of wood materials, and concerns about the risk of fire in wood-built buildings.
“We would essentially be storing the carbon that would otherwise be combusted for energy or aerobically digested on the forest floor and allowing the forest to ‘continue’ in this restorative, carbon-absorbing system.”
— Alan Organschi, Yale School of Architecture and Gray Organschi Architecture
But technological advances have re-shaped the wood materials sector. While many might think of wood products as simply the pieces found in the lumber section of Home Depot, “mass timber” technologies these days refers to engineered wood products that are laminated from smaller boards and materials. These methods enable producers to break wood materials down to their smallest components and recompose them to suit a project — removing the materials’ vulnerabilities and weaknesses. (Also, extensive testing of glue-laminated beams and cross-laminated timber structures has demonstrated fire-resistance in buildings up to 18 stories in height.)

Indeed, mass timber is now used in urban building projects across the world, from Portland, Oregon to Tokyo, Japan.

“Using timber as the main building material for inner cities may seem counterintuitive, but novel technologies combined with an overwhelming climate benefit make it something every city planner should consider,” said Reck.

Achieving a large-scale expansion of the mass timber sector will require changes in building codes, retraining of the construction workforce, expansion of the bio-based products sector, innovative urban planning, and a significant downscale in the production of mineral-based materials, researchers say.

Critically, it would also require advances in forest sustainable and continued re-forestation efforts to prevent over-exploitation of forest resources and ecosystems, as well as more research into the lifecycle of wood products to assure that the carbon stored in these products remains stored over the long term, Churkina says.

The authors acknowledge that growing the mass timber industry to a scale that challenges traditional building sectors will require additional research and coordination across sectors. But, they say, their findings suggest the vast potential to address a critical global challenge facing humankind in the decades ahead.

“To me it’s like the first step,” said Organschi. “It raises the question: why would we do this? And the answer is, well, if we do it right — and that’s a big if — the sheer capacity of buildings to work as climate mitigation tools is amazing. It’s amazing.”
The original paper: