In the arid Southwest, intense wildfire has become a game-changer, says Laura McCarthy '87 M.F., director of The Nature Conservancy's Rio Grande Water Fund. It's just the latest project in a long career where the conservationist has applied an ecosystems approach to complex environmental challenges. This weekend, McCarthy will be honored with a Distinguished Alumna Award at the annual F&ES Reunion.
By Timothy Brown
In May 2000, Laura McCarthy ’87 M.F. watched as the Cerro Grande Fire, a controlled burn that quickly spun out of control, raced across Los Alamos County in northern New Mexico. Before it was declared fully extinguished nearly three months later, the fire had destroyed some 47,000 acres and over 280 homes, and caused hundreds of millions of dollars in damages.

Having previously spent a dozen years working for the U.S. Forest Service as a wildlands firefighter, timber manager, and forest planner, McCarthy already knew about the ecological role of fire and forest management practices to reduce its most catastrophic impacts. But the Cerro Grande Fire, at the time the worst wildfire in New Mexico’s history, inspired her to become an expert in fire policy. Five years later, The Nature Conservancy (TNC) recruited her as their first Senior Policy Advisor for Fire and Forest Restoration. The Las Conchas Fire in 2011, which burned more than 150,000 acres — including 43,000 acres in the first 14 hours alone — and the massive post-fire ash and debris flows, deepened her concern about wildfire and altered her approach to forest and water management.

“In New Mexico, we have really experienced some game-changing fire that is outside the historic range of variation in size and intensity,” she said during a recent interview. “And it’s the intensity that really does the damage." 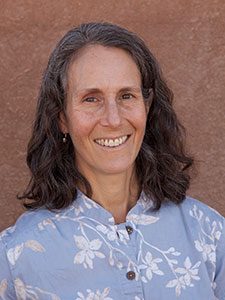 Laura McCarthy '87 M.F.
McCarthy, who currently serves as the Associate State Director at The Nature Conservancy in New Mexico, will be honored with a Distinguished Alumna Award from the Yale School of Forestry & Environmental Studies (F&ES) at the annual Reunion Weekend, October 6-8. On Saturday morning, Oct. 7, she will present a talk in Kroon Hall titled “Wildfire, Water Source Pollution, and the Rio Grande Water Fund.”

At TNC, McCarthy oversees programs in the Rio Grande, Gila, and San Juan Basins, including freshwater and climate and energy programs, and a new urban initiative. But it’s TNC’s Rio Grand Water Fund, which she founded and directs, where she’s truly revolutionizing the way forests are managed in the increasingly arid Southwest.

The Water Fund, a network of nearly 60 charter signatories, helps to secure water resources for one million people by restoring 600,000 acres of forest in northern New Mexico. These forests filter and store a majority of the state’s water supply. But overcrowded forests cannot function properly, and frequent, intense wildfires and post-fire flooding can cause extensive soil erosion, leading to debris flows that degrade the water quality for Albuquerque, Santa Fe, Native American Pueblos, and other communities downstream.

McCarthy, who previously spent eight years as associate director of the New Mexico-based Forest Guild, credits her training at F&ES with professors Herb Bormann, Tom Siccama, and Dave Smith with teaching her an ecosystems approach to land management. “At the time, weaving traditional forestry with ecosystem science was not very common, but F&ES was doing it,” she said.
The Water Fund, a 20-year program that links wildfire, forest management, water quality, and jobs, exemplifies her unique ability to apply systems thinking to environmental challenges. As director, she has cultivated broad support for the fund from a diverse coalition, including scientists, conservationists, ranchers, and developers. Based on TNC’s flagship water fund in Quito, Ecuador, the Rio Grande Water Fund is now one of the Conservancy’s lead examples in a global network of more than 30 water funds throughout Central and South America, Africa, China, and the United States. The fund also represents a modern approach to natural resource management.

At TNC, she has also lobbied Congress on fire policy, and developed a legislative strategy that resulted in the Collaborative Forest Landscapes Restoration Act, which was signed by President Obama in 2009. McCarthy thought the bill would solve the community forestry problem. But because fire behavior and forest degradation throughout the West is rapidly changing on such a massive scale, the implementation of the law didn’t work exactly as she had hoped. It was a tough lesson, but one that inspired her to explore other possibilities.

“Policy alone is not the answer. Policy can help, but we need other tools,” she said. “And that’s what led me to the Water Fund.”

McCarthy encourages students to take advantage of the networking opportunities at F&ES and to continue to develop better tools for managers to apply systems thinking.

“In my experience you create the new tools by doing,” she said. “I think the academic part is really important, but we also need people out in the world doing things. The academic part doesn’t work alone unless you have some proof of concept applying it. That’s been my niche.”