Dr. Nyeema Harris, who researches mechanisms promoting and threatening wildlife species persistence, will join the faculty of Yale School of the Environment as associate professor of wildlife and land conservation on July 1, in a new position created with generous support from the Knobloch Family Foundation. 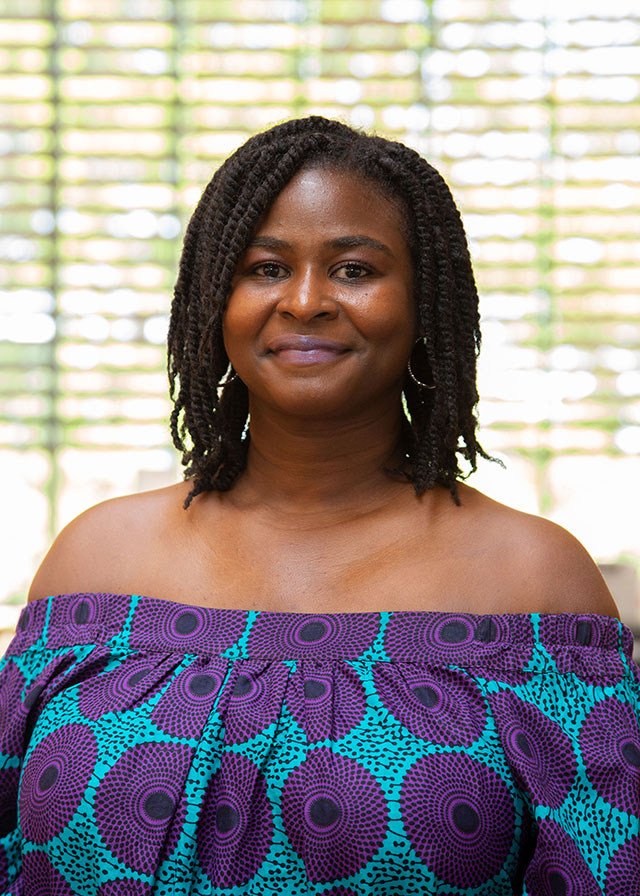 Harris will be teaching a new class on wildlife movement ecology at YSE this fall.

“I feel great enthusiasm in joining a community where I can operate in full authenticity in the breadth of my academic profile and where contributions of my diverse scholarship and justice, equity, diversity, and inclusion efforts are celebrated,’’ she says.

Harris’s research explores carnivore behavior and movement, ecology and conservation in urban systems and national parks at a global scale with ongoing projects throughout the Americas and Africa, specifically. Her work focuses on the myriad of nature’s antagonisms including parasitism, competition, human-wildlife conflict, and predation. Specifically, she critically examines spatial and temporal variations in species interactions, how interactive networks are structured, and the ecological consequences of species loss and land-use change.

“Nyeema Harris brings a cross-disciplinary approach to ecology that will elevate our research and scholarship in wildlife biology, movement, and conservation at YSE,’’ says Dean Indy Burke. “We are thrilled to have her expertise. Her innovation in the field and groundbreaking work on species preservation will contribute greatly to our goals.”

Harris thoughtfully dissolves traditional silos to represent an innovative integration of research, teaching, and service in her academic profile

Her study in W-Arly-Pendjari (WAP) — a protected region that spans Burkina Faso, Benin, and Niger — documented human pressures on mammal communities through camera surveys. It was a massive, collaborative effort and the first of its kind in West Africa. The study published in Conservation Letters found that livestock grazing more than poaching activity was the dominant human pressure on wildlife, followed by community members gathering wood, grass, and fruit. It highlighted the need to more explicitly incorporate food production systems into management plans, such as creating travel corridors for livestock herders to minimize impact on wildlife.
“Her ideas about large carnivore behavior are very provocative, testable, and are primed to change the way we look at modern problems in conservation.”
— C. Brandon Ogbunu
Her research also has delved into how the extirpation of apex carnivores, such as gray wolves, has affected the behavior of coyotes, who are mid-level predators. In a study published in the Journal of Animal Ecology, Harris and her team, using coyote feces in Michigan, found that in areas where grey wolves were not present as top of the food chain predators, coyotes changed what they ate, where they roamed and when they were active.

Harris’s scholarship benefits greatly from public engagement and participation.Her study published in Wildlife Society Bulletin that looked at the ability of volunteers, including K-12 students, to identify wildlife in Michigan through camera trap surveys, demonstrated that public participation in properly designed research can yield reliable results.

Harris, who grew up in Philadelphia, says her interest in wildlife and ecology was piqued when she traveled to Kenya with the Philadelphia Zoo in ninth grade. During the trip, she saw lionesses teaching their cubs how to hunt prey — killing a gazelle right before her eyes.

“It was exhilarating. It was phenomenal. It was amazing that I got to witness that,’’ says Harris. “Fast forward years later, and I’m developing my own research program called the Applied Wildlife Ecology Lab. The acronym is AWE because I very much want to make sure that the science and research that I am doing helps to create that same wonder that I felt as a teenager. And in my field activities today, I aim to help stimulate and expose underrepresented groups and disenfranchised communities to nature and the environment.”

Harris is the first ESA Early Career Fellow to be named Program Chair of the Ecological Society of America Annual Meeting, which will be held in Montreal in 2022.

At Yale, Harris will continue her research into human-wildlife interactions.

“There is a need to scrutinize why conflicts are emerging between people and wildlife all over the world — and it’s not just because they are in the same space,’’ says Harris, who has received a Fulbright award to study tigers in India. “A growing dimension of my research is thinking about how we minimize those negative interactions, as positive interactions can be truly transformative for people. What can we do as managers, as scientists, as activists, and as neighbors to make sure that those outcomes are positive instead of negative?”

C. Brandon Ogbunu, assistant professor in Yale’s Department of Ecology and Evolutionary Biology, says Harris is one of the most exciting researchers in her field.

“She combines a mastery of complicated theoretical ideas in ecology with some cutting-edge and rigorous field ecological methods. Her ideas about large carnivore behavior are very provocative, testable, and are primed to change the way we look at modern problems in conservation,’’ he says.
“She will be a wonderful ambassador for attracting new voices and perspectives to wildlife science and conservation.”
— Oswald Schmitz
Harris also has focused efforts on elevating the voices of Black scholars in the field of life sciences. She co-authored two commentaries in the journal Nature Ecology and Evolution calling for changes to address inequities. In a piece titled, “Hidden figures in ecology and evolution,” Harris  and her co-authors wrote, “To address this lack of recognition, we need accommodations that recognize the uniqueness of Black women’s contributions, broader evaluative metrics and infrastructures to counter financial burdens.”

Oswald Schmitz, Oastler Professor of Population and Community Ecology and senior associate dean of research, who headed the search committee, says Harris’s work will bring a deeper understanding into species movement and migration.

“We are thrilled to have Nyeema join us at YSE. Her research provides leading new insights about how human land uses shape animal movements and migration. Her work will provide key insights for conserving habitats and landscapes in ways that are just and equitable for human societies and wildlife to coexist,” Schmitz says. “She will be a wonderful ambassador for attracting new voices and perspectives to wildlife science and conservation.”
– Fran Silverman  •  fran.silverman@yale.edu  •  +1 (203) 436-4842