In an interview, Eric Desatnik ’10 M.E.M., founder of the Environmental Film Festival at Yale, discusses original vision for the festival, how it has evolved over the past decade, and why film is such an important medium for telling environmental stories.
In the fall of 2008, first-year F&ES student Eric Desatnik suggested to fellow students that they launch an film festival to inspire and empower the School and the greater New Haven community. Nearly a decade later, Desatnik is returning for the 10th Environmental Film Festival at Yale. 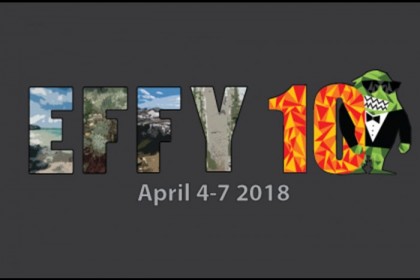 View the full agenda for the 2018 Environmental Film Festival at Yale
Desatnik ’10 M.E.M., who recently launched his own strategic communications agency, will speak as part of a kickoff gala at Kroon Hall. [Register for the gala]

In an interview, he talks about his original vision for the festival, how it has evolved over the past decade, and why film is such an important medium for telling environmental stories.

How did the first EFFY come together?

Eric Desatnik: The idea came about in the first few weeks of my time at F&ES, while students began gravitating toward SIGs [student interest groups] and other activities. I grabbed some fellow students and said, “What if we started an Environmental Film Festival?” Having had a background in the entertainment industry, I had the know-how and contacts to get this off the ground. The administration — including Gus Speth, the dean at the time — was quick to support this, as was the filmmaker community.

What was the vision?

Desatnik: I think science communication in general is an underrepresented and undervalued field, but should be a more important focus at F&ES. The vision was that EFFY could not only be a platform for environmental, and related, documentaries to inspire the Yale and New Haven communities, but also to shine a spotlight on the need to distill often-complicated environmental issues into digestible and compelling formats and stories, which I think can benefit everyone at F&ES no matter their specific area of study.

Since the beginning EFFY has regularly included community events to involve the greater New Haven community. Was that always part of the plan?

Desatnik: Absolutely, this was part of the vision since day one. "Free and open to the public" were our two core tenets. We are fortunate to have the resources to bring in these films and speakers; I don't think we should be setting up barriers to dissuade the community from attending and being inspired by these films and events. We conducted a survey after the first EFFY and I think something like 50 percent of the attendees were from the New Haven and surrounding communities.


Have you been able to get back to subsequent festivals? What do you think of how it has evolved?

Desatnik: I was humbled to bring the documentary, The Whale — which I exec produced with Ryan Reynolds and Scarlett Johansson — to EFFY5, which was the last time I was able to attend. Every year, it's been a sigh of relief to hear that there have been first-year F&ES students with enough interest to carry on the legacy of EFFY and they've been doing a great job. I'm a proud parent, for sure. I look forward to discussing what EFFY might look like over the next 10 years.

Before launching his own agency — a strategic communications firm focused on science, technology, and media — Desatnik spent two years at WildAid whose core business is to distribute high-impact celebrity-driven public service announcements to reduce the demand for illegal wildlife products and to more generally inspire conservation.He then spent six years at XPRIZE, the global leader in incentive competitions to bring about technological breakthroughs for the betterment of humanity.