An “urban parklet” designed by an F&ES student in New Haven’s Fair Haven neighborhood has converted a series of parking spaces into a public “ecological classroom,” connecting the neighborhood with urban nature in a whole new way.
By Joshua Anusewicz 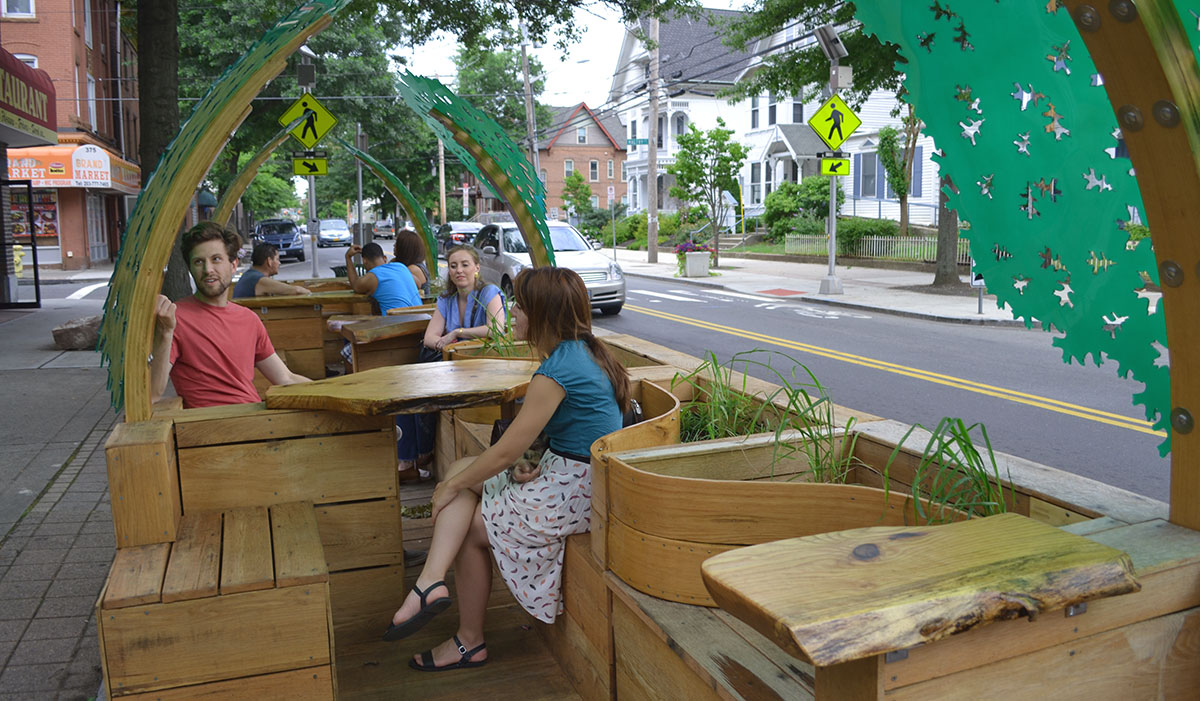 Courtesy of Misha Semenov
A forest has sprouted from the asphalt in New Haven’s Fair Haven neighborhood, complete with maple, oak, and elm trees that are familiar to the city’s neighborhoods.

But these “trees” weren’t grown — they were built. Second-year student Misha Semenov ’19 M.E.M./M.Arch., and Kassandra Leiva, a student at the Yale School of Architecture, have built what they call New Haven’s “Urban Canopy Parklet.”

Using wood from felled trees and dismantled houses in the New Haven area, the parklet features abstract versions of the city’s most prominent tree species as canopies, as well as solid wood tables constructed by local furniture builder Dana Scinto. Signage — in English and Spanish — explains where the wood came from and the importance of the trees to the ecology of the city.
“The parklet creates human interaction with trees in the abstract and brings about a new appreciation for all that trees do for our city.”
— Misha Semenov ’19 M.E.M./M.Arch.
The project has converted several Grand Avenue parking spaces into a public “ecological classroom,” connecting the neighborhood with urban nature in a whole new way, said Semenov.

“The parklet creates human interaction with trees in the abstract,” he said, “and brings about a new appreciation for all that trees do for our city.”

The parklet — a small, public seating area or green space — is the city’s first, and the design was the winner of the 2017 New Haven Parklet Design Competition, winning $3,000 for construction. Semenov, who is earning a dual degree through the School of Architecture, said that the idea for the parklet was hatched last summer during the urban ecology portion of MODs, F&ES’s summer orientation program. (Semenov is from San Francisco, where parklets first started springing up about a decade ago.) 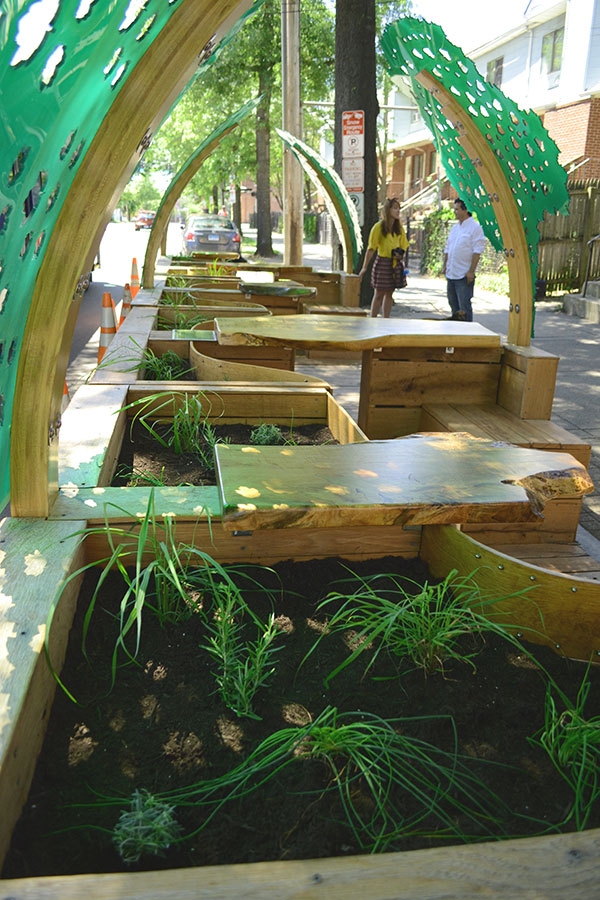 Courtesy of Misha Semenov
The project is an extension of Semenov’s focus on “ecoempathy,” which seeks ways to redesign the built environment to create a more empathetic relationship between humans and nature. In 2017, he and Leiva founded The Ecoempathy Project, a blog where they discuss what ecoempathy means and how the idea is being implemented across the world.

“My ambition is to tie the environment to our emotion,” he said. “What tools can we use to encourage a deeper emotional and physiological connection to nature?”

Semenov said the project has also deepened his ties to the New Haven community. Not wanting to “drop something down like a UFO,” he said he regularly attended neighborhood meetings, spoke with local official and activists, and encouraged local volunteers to pitch in. Those efforts, he said, have added to the early success of the parklet, which is regularly filled with patrons of local eateries and nearby professionals.

The project also involved numerous members of the Yale community. Kent Bloomer, a professor at the School of Architecture, provided space in his design studio to construct the wooden furniture. Caroline Scanlan ’18 M.F. and Laura Ostrowsky ’19 M.F. of the student interest group Environmental Educators helped with the signage. Colleen Murphy-Dunning, program director of the F&ES-based Urban Resource Initiative, helped Semenov and Leiva complete grant applications, while the Class of 1980 Fund provided financial support.

The parklet will remain in place until November, Semenov said, and is expected to find a new home in the city in the spring. 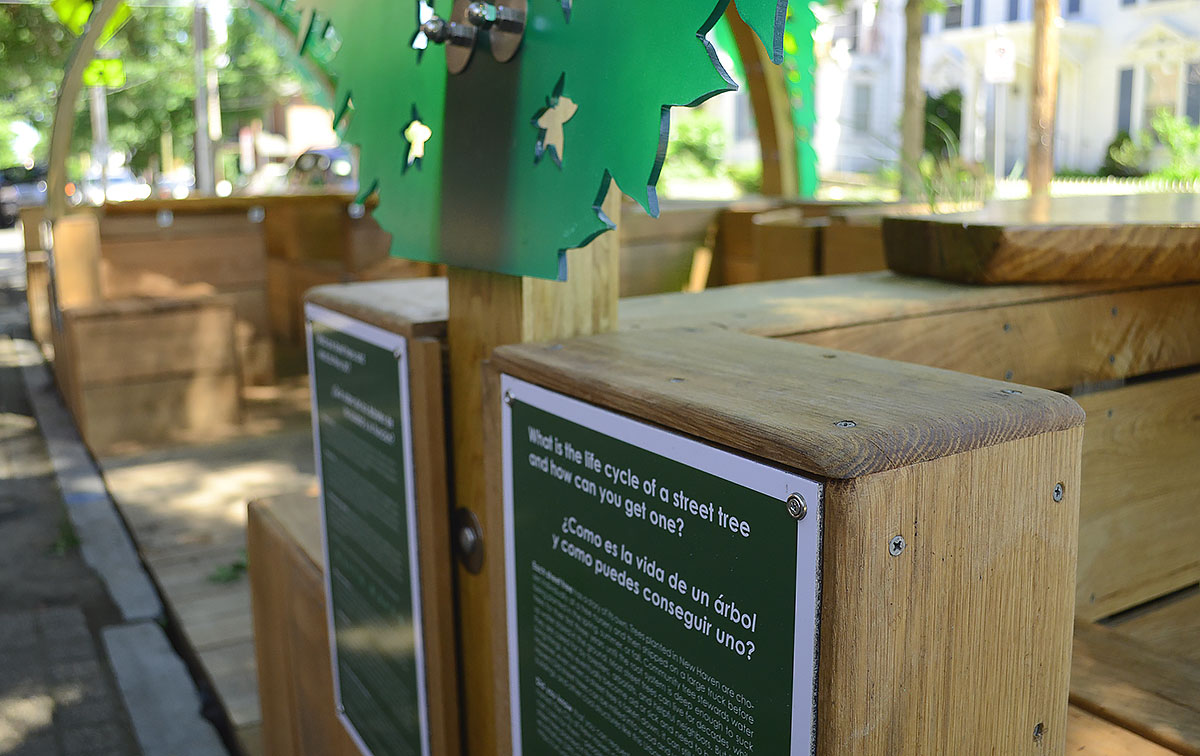