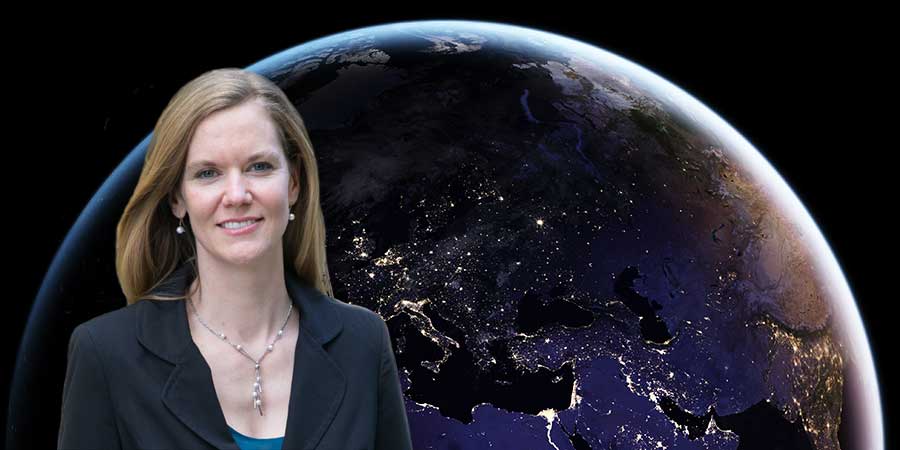 Background image: NASA’s Earth Observatory
Eleanor Stokes ’18 PhD, a senior scientist and lead of strategic operations for the Universities Space Research Association, has been named one of Geospatial World’s 50 Rising Stars for her work on Black Marble, NASA’s first nighttime light dataset, which provides insights on human settlements and the interactions between urban activities and the environment.

The daughter of a rocket scientist, Stokes had pictures of women astronauts on her bedroom door as a child, as inspiration. And while she hasn’t been in space (she gets motion sick) her work enables her to view Earth from the lens of space.
As co-leader of Black Marble, Stokes has helped to develop methodologies and applications for data from the Visible Infrared Imaging Radiometer Suite (VIIRS) nighttime sensor aboard NASA’s Suomi-NPP satellite spacecraft.

“Dr. Stokes’s research is pushing the envelope on our understanding of human activities using spaceborne satellites. Her novel use of nighttime light imagery, including development of new algorithms, allows us to explore new science questions such as how culture affects energy use and how natural disasters affect power supplies and urban resilience,’’ Seto says.

Stokes has worked on the Black Marble project since the nighttime sensor was first launched in 2012 and has helped refine its processing, validate its measurements, analyze its data, and direct new applications for its use in science and society.
In the early days of testing the sensor’s capabilities, she remembers having to drive out to a remote area of West Virginia, sleep in a tent and then get up early to flash a high-tech bright light when the satellite passed overhead to see if the sensor could pick it up. Since then, the satellite data has gone through several rounds of science testing and is now available for public use. The VIIRS sensor takes images once during the day and once a night, and the archive allows researchers to study human activity, urbanization, and the impact on the environment on a fine scale.
“That’s real impactful data we can provide FEMA and other relief organizations to help inform their boots-on-the ground operations.”
— Eleanor Stokes
One of the first major projects Stokes and the Black Marble team worked on was analyzing nighttime activities in the Middle East during Ramadan. Using data from the sensor, the team has also help map vulnerable communities that lost power after Hurricane Maria slammed Puerto Rico and a winter storm devastated Texas in February.

She is hoping to continue to study the effect of climate change on the electrical grid, and the team is also working with climate scientists on spatially mapping the different key sources of GHG emissions, which are often co-located with characteristic nighttime signatures such as gas flares and road traffic.

This year, the sensor helped the team analyze the effect of pandemic lockdown orders on nighttime activities across the globe.

Her dream is to have a sensor that will capture data every five minutes to see minute changes in a region. And she hopes the science the Black Marble team has produced on how human activities impact Earth systems will prompt NASA to invest in future sensors.

“NASA science has focused on natural systems, forests, hydrology, oceans, polar ice, etc. All of these things are super important, but we are in the Anthropocene. Humans are the primary driver of change,’’ she says. “Humanity is facing major global risks right now from extreme weather and sea level rise. It’s very important to have a satellite record that can speak to the human piece of the puzzle.”