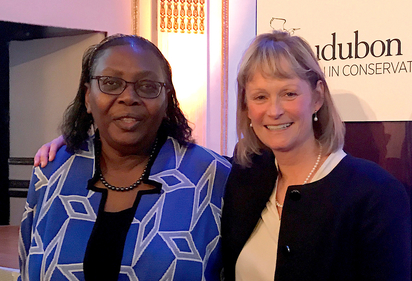 Dorceta Taylor, left, with F&ES dean Indy Burke at the 2018 Audubon Women in Conservation Luncheon, where Taylor was presented with the Rachel Carson Award.
Dorceta Taylor ’85 M.F.S., ’91 Ph.D., one of the nation’s leading environmental justice scholars and activists, was recently named a recipient of the 2020 Wilbur Lucius Cross Medal, the highest honor Yale Graduate School bestows on its alumni.

“This honor is incredibly well-deserved and an important recognition of Dorceta Taylor’s work,” said F&ES dean Indy Burke. “Throughout her career she has shown how issues of environmental justice are intrinsically linked to all the work that we do. Her scholarship has strengthened the entire field and continues to be an important resource in the teaching of our students today.”

Taylor currently serves as the director of diversity, equity, and inclusion at the University of Michigan’s School for Environment and Sustainability, where she also teaches courses on environmental justice. She has written several books on diversity in the environmental movement, including “Toxic Communities: Environmental Racism, Industrial Pollution, and Residential Mobility” and the award-winning “The Environment and the People in American Cities,” as well as numerous scholarly articles.

Her watershed 2014 study on the state of diversity in nearly 200 U.S. environmental organizations brought into focus the staggering lack of people of color in the field and pushed many prominent organizations to commit to increasing diversity in their workforces.

Taylor’s critical work and scholarship has garnered many awards and accolades. Most recently, she was recognized by the AARP as “carrying on Martin Luther King Jr.’s legacy,” alongside Georgia politician Stacey Abrams and lawyer Bryan Stevenson.

She serves on the F&ES Leadership Council and, in 2015, was awarded the F&ES Alumni Association Board's Distinguished Alumni Award.

A full day of events celebrating Taylor and three additional Wilbur Cross Medalists will be held on October 5, 2020.