The organizers wish to thank the following judges and moderators: 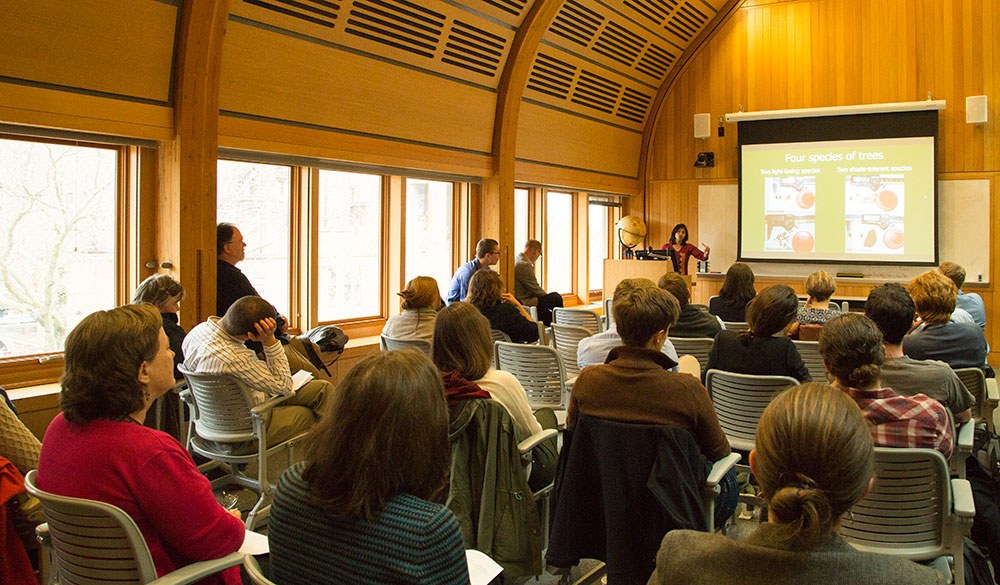 For the first time, the conference integrated both masters and doctoral research into one event, highlighting the range of innovative, original scholarship coming out of the F&ES community. Also, the event involved faculty and staff members — including representatives from many of the School’s centers and programs — who served as panel moderators and judges.

And unlike previous conferences, the daylong event consisted of a series of panel discussions, five-minute flash talks, and poster sessions.  So while in previous conferences students shared their research in a series of formal presentations, typically in a large auditorium, the new format allowed participants to discuss their work with peer researchers as part of issue-based panels. For presenters that meant they were able to share their research in a range of dynamic settings — and to packed rooms.

“It was the first time that I can remember seeing the original research from the entire school, and the breadth of what we’re doing, become activated. It was very exciting,” said Karen Seto, Associate Dean of Research. “It was amazing to see the entire community come together, including so many of the faculty who were there throughout the day and representatives from the centers and programs who were so engaged.”
During the conference the School awarded Ashley Keiser ’14 Ph.D. the fourth annual F. Herbert Bormann Prize, which honors an F&ES doctoral student whose work best exemplifies the late Yale professor’s legacy of interdisciplinary research creating insights into the relationship between humans and the environment. Read more

For the first time the School presented the Oswald Schmitz Award for Excellence in Research Communication, which honored best communications among doctoral researchers, and a prize for best poster presentation.

The winner of the Schmitz prize was Eleanor (Kellie) Stokes, a doctoral candidate who described her study of accessibility to jobs by automobile, bus, and subway for the general public and the working poor. The recipient of the poster prize was Jay Wason, a postdoctoral scholar in the lab of F&ES Prof. Craig Brodersen, who tested the drought tolerance of certain tree species.

The keynote address was delivered by Pamela Matson, dean of the Stanford School of Earth, Energy & Environmental Sciences, who discussed leadership traits that will be needed achieve the goals of sustainability and the wellbeing of all people.

The organizers wish to thank the following judges and moderators: