He Left His Mark: The Yale School of the Environment Remembers Kevin Jiang 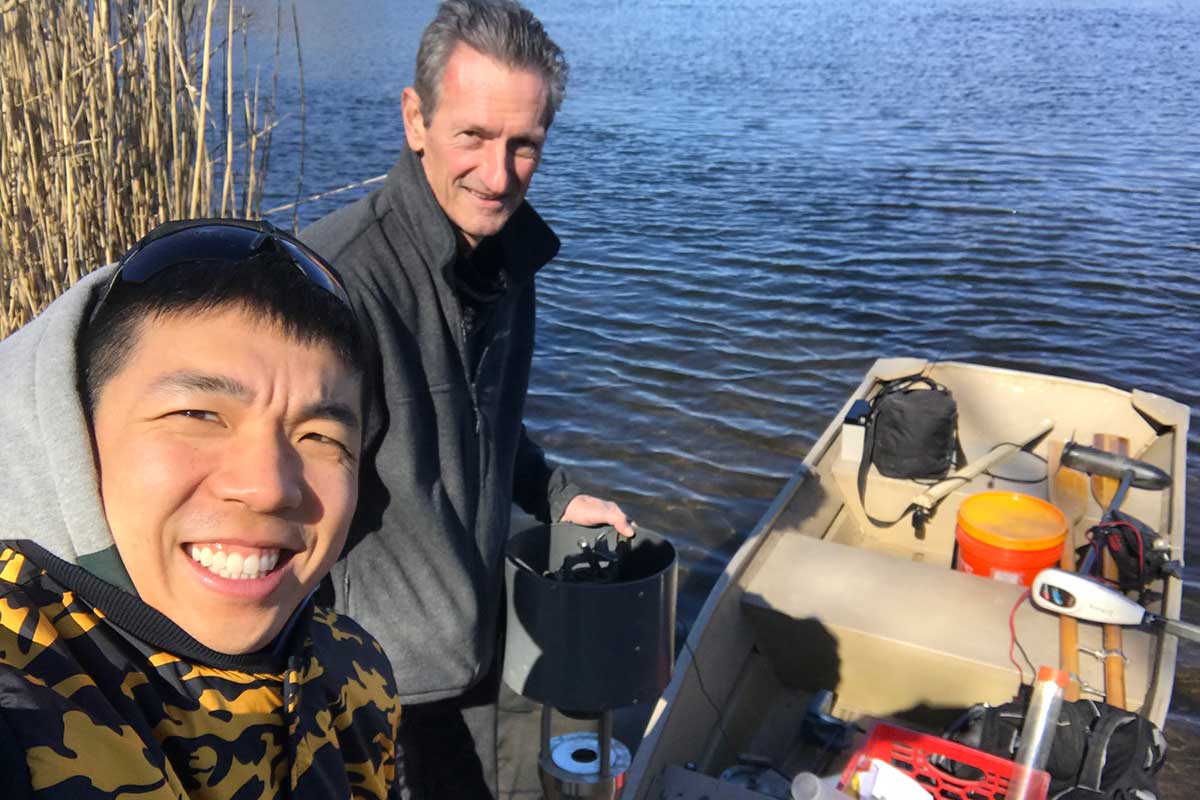 Kevin Jiang (L) conducts field research with professor Gabe Benoit.
The course “Fundamentals of Working with People” at the Yale School of the Environment (YSE) challenges students to understand their own values and the values of others, build teams with diverse experiences and skills, and influence the actions of the groups within which they work.
It’s meant to push students out of their comfort zones — an experience tailor-made for Kevin Jiang ’21 MESc.
“He would show up to class with a degree of energy that I’ve never experienced,” says Robin Schmid, a second-year master’s student at the Jackson Institute for Global Affairs and a teaching fellow at YSE, who worked in a small group with Jiang throughout the semester-long course. “When there was a silence, Kevin was always the one to raise his hand and get the conversation started. He was very direct, very frank. He was willing to make himself vulnerable in a way that is uncommon, but very special.
He certainly stood out. He left his mark.”
“Looking back, in my 30 years of teaching, he’s the single most effective student I ever had. He was such a bright light to be extinguished so early. Some people are embers and smolder, but he flamed and burned very brightly when he was here.”
— Gabe Benoit
The YSE community is mourning the loss of Jiang, who was killed in New Haven on February 6. He is being remembered fondly for his charisma, his dedication to environmental science, his multitudinous talents, and his unending commitment to helping others.
“Kevin epitomized the spirit of our School: service, commitment to others, and using science to make a better and safer world,” says Indy Burke, Carl W. Knobloch, Jr. Dean. “It’s tragic to lose someone who offered so much promise, and who was beloved by so many members of our community. It’s important that we remain committed to addressing the kinds of ecological and societal challenges he was addressing, honor him and the many great things he accomplished in his all-too-short life, and that we be there for each other.”
Jiang was a second-year master’s student from Chicago, who came to Yale after spending two years in environmental consulting, helping food and steel manufacturers comply with local and federal environmental regulations. He graduated from the University of Washington with a degree in environmental studies, and was a veteran of the U.S. Army, serving as a tank operator and as a chemical, biological, radiation, nuclear officer. At the time of his death, Jiang was a member of the Army National Guard recently called up for active duty assisting with COVID-19 relief efforts in Connecticut.
As a YSE student, Jiang worked closely with his academic adviser Gabe Benoit, professor of environmental chemistry and co-director of the Hixon Center for Urban Ecology, who remembers Jiang as a student who was extremely dedicated and hard-working.
“When given a project, he’d really dive into it and make amazing accomplishments in the shortest amount of time,” says Benoit.
Jiang, said Benoit, was also very innovative and entrepreneurial and pitched ideas to him for eco-friendly products that he could market, including storm drain catchers that grew from the class project and a proposal for a biodegradable packaging that could help cut down on waste in military food service. 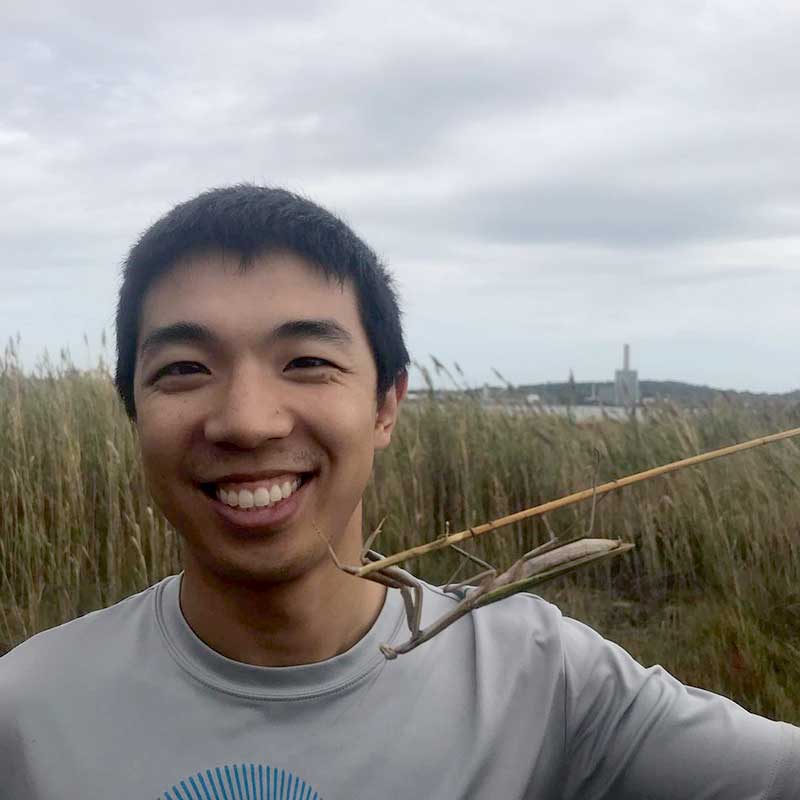 Kevin Jiang hanging with a praying mantis near New Haven harbor.
“I could see him innovating new pathways and projects,’’ Benoit says.

While working with Benoit, Jiang assisted on two key research projects involving waterways in the greater New Haven area. The first, in 2019, sought data on the mercury levels in fish in ponds that other students had struggled to obtain. Using a rented car, Jiang, an avid fisherman, visited more than 30 local ponds. The research found that while most fish didn’t have high mercury levels, some did, and fishing advisories would have to continue.
The second research study, which is ongoing, involved installing litter traps in storm drains to determine what kinds of waste are dumped and how to prevent them from ending up in waterways downstream. Jiang had the unenviable task of lugging yards of wet trash from local waterways to the lawn behind Marsh Hall, letting them dry, then categorizing them by object or brand.
The laborious tasks of sorting the storm trap trash were often shared with Jessie Peterman, an undergraduate student at nearby Southern Connecticut State University whose academic adviser is a research partner of Benoit. Peterman recalls hours spent with Jiang as they categorized the trash that left a lot of room for conversation.
“It was one of the most unique experiences of my life,” says Peterman of working with Jiang. “He was very passionate about the work he was doing and was very passionate about God — and it’s not always easy to blend the two. But he was so inquisitive and curious, and willing to accept the differences in others.”
Mary Evelyn Tucker, senior lecturer and research scholar who co-directs the Forum on Religion and Ecology at Yale with John Grim, said Jiang’s dedication to his Christian faith guided his environmental focus.
Memorial Service Livestream
Share Your Memories and Photos
Related Articles

Other Resources
“He was very committed to the sense that the Earth is a very beautiful and complex system of life that deserves to be protected,’’ Tucker says.

Tucker recalls Jiang creating a backyard garden at his home in New Haven as part of her “Environmental History and Values” course, mirroring the values of Henry David Thoreau.
“Kevin took pictures and filmed every aspect of it,” she says. “He made its construction part of his final project along with commentary from Thoreau. When it was washed out by a torrential rain, he simply rebuilt it and documented its regeneration. That’s how he was — always filled with positive energy, delight, and curiosity.”
By the end of the semester, she said, Jiang had grown kale, swiss chard, and lettuce.
“He was so delighted he could do it. There was no ego; it was more, eco. He just exuded this joy in nature and life.”
Stuart DeCew, executive director of the Center for Business and the Environment at Yale, remembers Jiang as a standout in his “Fundamentals of Working with People” course — always willing to catalyze conversations, question his own perspectives and learn from peers, and put his own values into practice.
For a class assignment, DeCew recalls Jiang outlining his four key tenets: God, family, friends and hobbies, and financial independence.
“He believed deeply in service,” DeCew says. “He thought about how he could support and help others in the world.”
It was not uncommon to enter Sage Hall to see Jiang playing the piano to welcome his classmates. For his final project in DeCew’s course, Jiang submitted a poem, “Respecting Different People.”
“His emphasis was on how he contributed, how he held community, how he helped his mom,’’ says DeCew. “And his real north star was finding a relationship he could build a family with.’’
Jiang, who was just days away from his 27th birthday, was recently engaged to his fiancée, a graduate student at Yale. The two had met just a year ago on a church retreat and, along with Jiang’s mother, were active volunteers at New Haven’s Trinity Baptist Church. In addition to his many listed talents, Jiang was also fluent in Mandarin and had begun delving into real estate investment, spurred by an interest in eco-friendly housing for lower-income and homeless populations.
“Looking back, in my 30 years of teaching, he’s the single most effective student I ever had,’’ says Benoit. “He was such a bright light to be extinguished so early. Some people are embers and smolder, but he flamed and burned very brightly when he was here.”
Close to 700 members of the YSE and Yale communities were joined by Kevin’s family, fiancée, and members of his National Guard Unit at an online vigil celebrating his life on February 8. President Salovey spoke of the importance of coming together as a community even remotely as necessitated by the Covid-19 pandemic, while Dean Burke, YSE students, faculty, and staff shared stories of Kevin’s kindness, faith, and dedication to the environment. A memorial is being planned for a future date and more information will be posted as it becomes available.