The first and only national monument in the Atlantic Ocean, the Northeast Canyons & Seamounts Marine National Monument, has been protected for three years under the Antiquities Act of 1906. Advocates for its designation and community members recently gathered at F&ES to commemorate the unique importance of this marine monument.
By Katie Bleau
Just off the coast of New England lies a hidden deep-sea ecosystem teeming with marine life. Here, at the edge of the northeast continental margin and 4,000 meters below the surface, canyons and seamounts along the ocean floor create unique oceanographic conditions that support an abundance of biodiversity. It’s a “scene from Dr. Seuss’s garden,” filled with three-meter-tall sea whips, forests of corals, and numerous fishes, said Peter Auster, senior research scientist at the University of Connecticut.

This ecosystem, approximately the size of Connecticut, is undisturbed — and will remain so. After nearly two decades of lobbying, President Obama designated the Northeast Canyons and Seamounts Marine National Monument in 2016, making the area the first U.S. national marine monument in the Atlantic Ocean. 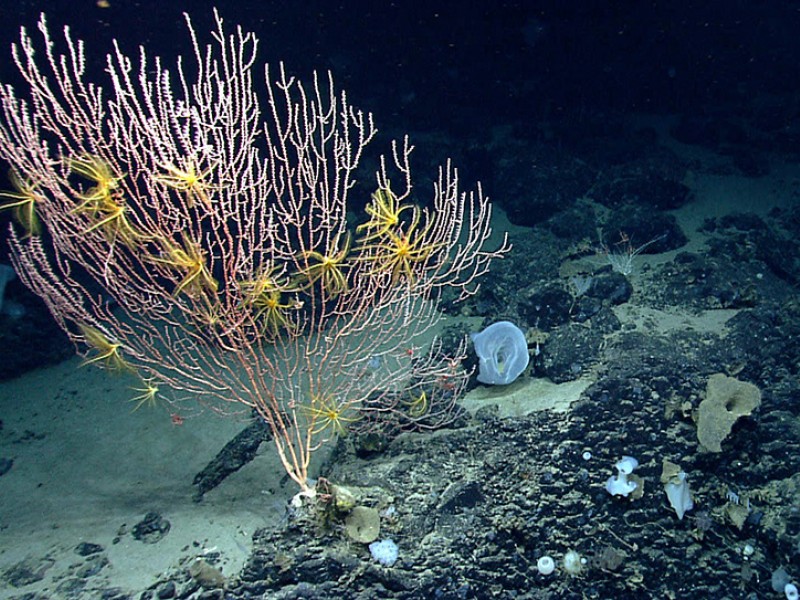 Commemoration of this monument occured in the wake of critical United Nations special reports stressing unprecedented threats to biodiversity and oceans due to a changing climate. Preserving marine biodiversity hotspots from human disturbance allows these areas to serve as a reservoir for marine wildlife, and improves ecosystem stability and resiliency to disturbances like climate change — giving marine wildlife a fighting chance to adapt.

“Intact ecosystems like this monument can provide resiliency from climate change effects,” explained Lisa Suatoni,” senior scientist at the Natural Resources Defense Council and clinical visiting lecturer for Yale Law School’s Environmental Protection Clinic. “This [monument] serves as an anchor to a larger movement to preserve our oceans.”

The Northeast Canyons and Seamounts are protected under the Antiquities Act of 1906, which allows a U.S. president to create national monuments to protect federal lands for natural, cultural, or scientific purposes. The use of this law by President Obama was controversial, as multiple commercial fishing associations argued that designating the area as a monument was unlawful and harmful to their businesses.

“Protecting places with no representation is long consistent with our country’s history,” said Klee, who is the former commissioner of the Connecticut Department of Energy and Environmental Protection. “The Antiquities Act provides the bedrock principle of federal land protection that can override other rights and be asserted for scenic and scientific interests, long before land is threatened by crisis.”

The event, co-hosted by the Connecticut League of Conservation Voters and the Citizens Campaign for the Environment, included an expert panel discussion, as well as rare photographs and footage of the underwater ecosystem.
Katie Bleau ’20 M.E.M. is a joint-degree student at the Yale School of Forestry & Environmental Studies and Vermont Law School.