A new Yale study reveals important insights into the factors that influence the release of greenhouse gases from rivers and streams, including a key relationship between storm events, ecology, and topography in moderating this release.
For a long time, scientists evaluating the global carbon cycle considered rivers and streams akin to pipes, channeling carbon and other solutes from the land to the sea. Today, however, scientists know that along the way these inland waters also “breathe” carbon and other gases into the atmosphere.

In fact, the critical role of this greenhouse gas “evasion” from rivers and streams was, for the first time, incorporated into the Fifth Assessment Report of the UN’s Intergovernmental Panel on Climate Change in 2014. 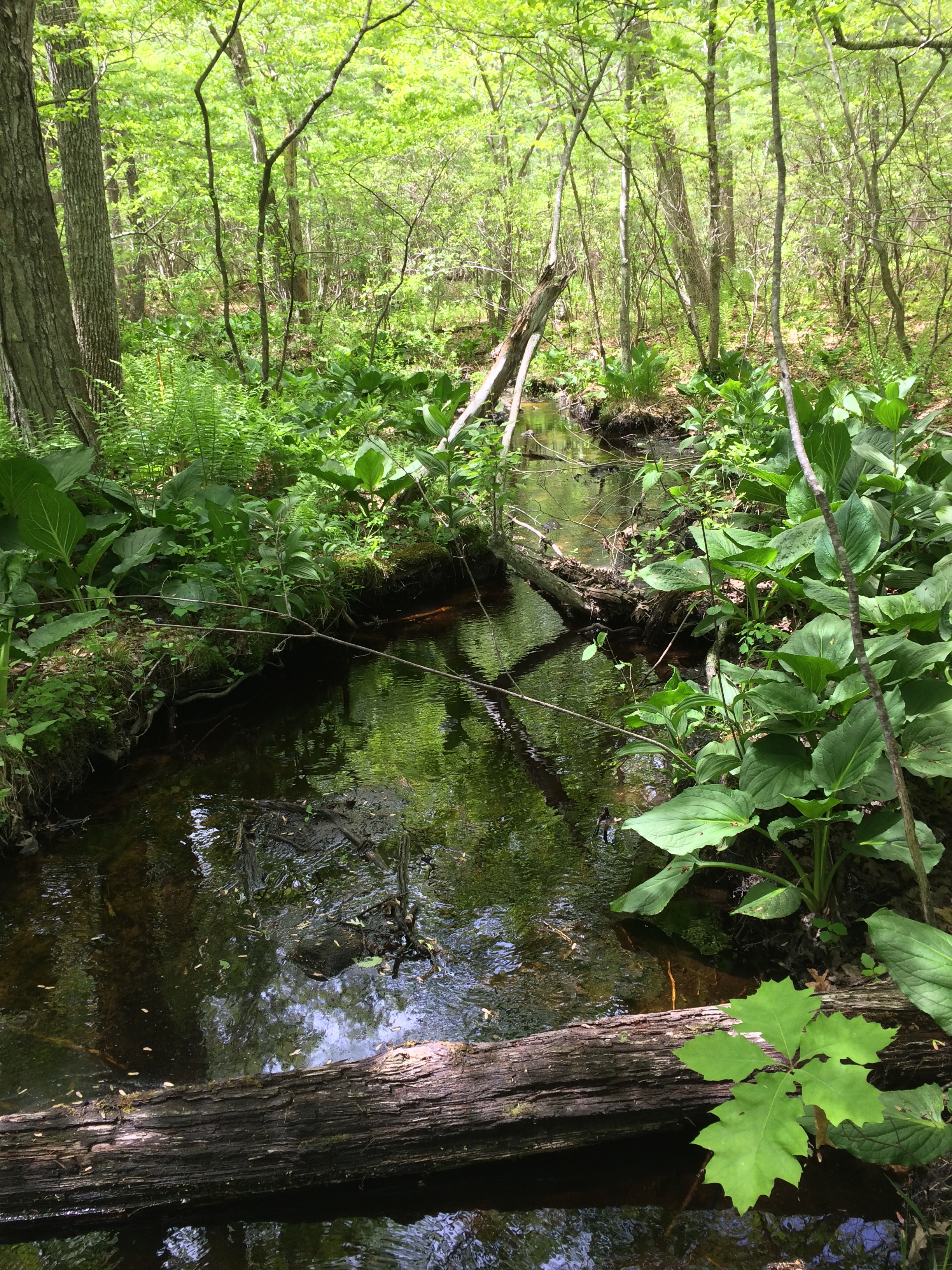 Courtesy of Kelly Aho
While concentrations of greenhouse gases tend to be higher in wetland streams than in forested streams, those flatter, calmer waters are less likely to release those gases into the atmosphere.
Yet much remains unknown about how much gas is actually released from these water systems and the chemical and ecological dynamics that affect their transport.

A new Yale study reveals important insights into the factors that influence the release of greenhouse gases from these inland waters, including a key relationship between storm events, ecology, and topography in moderating this release.

In an analysis of headwater streams in central Connecticut, scientists found that concentrations of three greenhouse gases — carbon dioxide, nitrous oxide, and methane — increased in wetland streams during rainstorms, but decreased or remained constant in forested streams. However, those gases were also less likely to be released from the wetland streams than from the streams in forested areas, they found.

Writing in the Journal of Geophysical Research: Biogeosciences, they conclude that these variances are likely due to the fact that forested streams tend to be steeper, creating greater turbulence that, in turn, promotes gas releases. Meanwhile, in wetland streams those inputs were more likely to be carried downstream farther from their source, said Kelly Aho, a doctoral candidate at the Yale School of Forestry & Environmental Studies (F&ES) and lead author of the study.

“When you think about what a wetland looks like, it makes sense: wetlands are really flat, which is why water and organic matter may accumulate there,” Aho said. “As a result, during a rainstorm those wetlands and their soils are a source of greenhouse gases.”

“But,” she added, “gas concentrations represent only half the equation.” 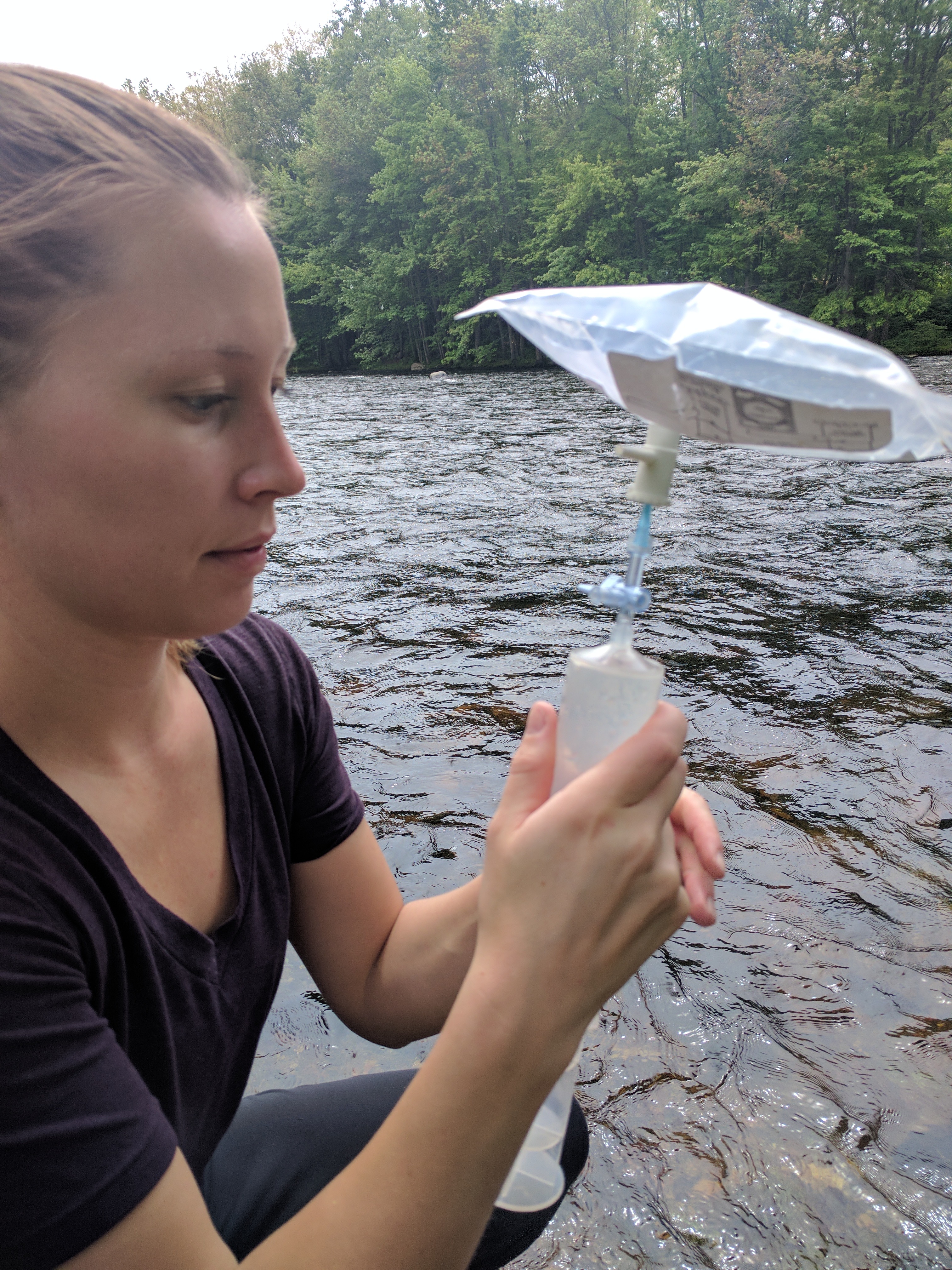 Courtesy of Kelly Aho
Kelly Aho, a Ph.D. candidate at the Yale School of Forestry & Environmental Studies, collects samples from a river in Connecticut.
The release of gases from rivers and streams also depends on the gas transfer velocity, or the rate at which gases move across the air-water boundary. A lack of turbulence tends to produce a lower gas transfer velocity and slower rates. So while greenhouse gas concentrations in wetland streams will increase suddenly during a rainstorm, those gases are more likely to remain trapped in the flatter, less turbulent streams until they encounter steeper terrain farther downstream.

Understanding these dynamics, Aho said, will be critical in order to develop more accurate carbon cycle projections and climate models — particularly as extreme weather events are projected to increase in the coming decades.

“If a researcher is looking at carbon sequestration from a local perspective, they might be just monitoring what goes in and out vertically within a plot of land,” she said. “But if that area includes a wetland stream, for instance, the gases are likely to flow away from the plot they’re looking at; the carbon may be released into the atmosphere outside of their point of view, so you may totally miss it. So it’s important to think about this idea of lateral transport.

“That’s why streams and rivers are so interesting,” she added. “They’re moving solutes across the landscape, so we have to take that into account.”

The paper was co-authored by Peter Raymond, a professor of ecosystem ecology at F&ES.

The Journal of Geophysical Research: Biogeosciences is a publication of the American Geophysical Union.
– Kevin Dennehy    kevin.dennehy@yale.edu    203 436-4842