In Defense of the Predator

How Wolves Killing Moose Can Help in the Battle Against Climate Change
By Josh Anusewicz
Ninety percent of Canada’s 37 million residents live within roughly 100 miles of the U.S. border — a staggering figure for a country that’s more than 3.8 million square miles in size, the second largest in the world.

The reason for the peculiar population density is that most of Canada — 1.5 billion acres, to be exact — is covered by boreal forest, stretching from the Maritimes on the Atlantic Ocean all the way to the border of Alaska in Yukon Territory. It’s an endless sprawl of conifers, thousands of lakes and ponds and marshy bogs, leaving much of this enormous forest virtually undisturbed and uninhabitable.

Uninhabitable to humans, that is. Canada’s boreal forest is one of North America’s most pristine wildlife habitats, providing a home for a variety of fish, birds, and mammals large and small to thrive. But it’s the thriving of one mammal, the venerable moose, that’s put a spotlight on the razor’s edge this ecosystem currently sits on. And why academics, environmentalists, business leaders, and politicians are all paying close attention to what happens next.
The 7,800-acre Yale-Myers Forest is considerably smaller than Canada’s boreal forest, but it suits Oswald Schmitz just fine. Schmitz, Oastler Professor of Population and Community Ecology at F&ES, studies the link between two important components of natural systems: biodiversity and ecosystem services.

He explains it in plainer terms: “The theme of my research has been to understand how the diversity of predators — from insects all the way up to mammals — shape their prey communities and what the prey communities eat in terms of vegetation. I then conduct experimental research to understand how they fit together and the mechanisms that determine how they interact.”
“The classic view in ecology has always been that a habitat will attract herbivores, and then predators will come and eat the herbivores. What we’re seeing now is that predators are actually the ones building the habitat. They’re regulating what herbivores do and, in a sense, promoting habitat sustainability.”
— Oswald Schmitz, Oastler Professor of Population and Community Ecology
For that, Yale-Myers is perfect, allowing for more exacting experiments and detailed measurements. Schmitz has used this outdoor laboratory for the better part of 17 years to conduct many of his experiments on arthropods, particularly spiders, and the role their predatory habits play within the ecosystem.

His research has yielded fascinating results, extending beyond what many have understood of predator-prey relationships. A three-year study completed in 2008 looked at the predatory habits of spiders and their grasshopper prey; Schmitz determined that spiders that actively hunt predictably alter the abundance of their herbivore prey. Alternatively, spiders that wait to ambush their prey trigger fear in grasshoppers, changing their foraging activity in a manner that reduces predation risk. The mere presence of spiders, he found, leads to a different “cascading effect” on the composition and abundance of plant species, in turn altering key ecosystem functions like production, decomposition, and nitrogen mineralization.

Schmitz built upon this research in 2013. He found that when plants weren’t being foraged by herbivores whose behavior was being altered, they were growing faster and causing the ecosystem to store close to 40 percent more carbon. The presence of predators, he reasoned, promotes carbon cycling and nitrogen cycling that helps plants grow and keeps our air safe to breathe.
“The classic view in ecology has always been that a habitat will attract herbivores, and then predators will come and eat the herbivores,” Schmitz said. “What we’re seeing now is that predators are actually the ones building the habitat. They’re regulating what herbivores do and, in a sense, promoting habitat sustainability.”

In December 2018, Schmitz and a team of researchers upped the ante, scaling up their work to a landscape level. By using data from remote sensing in combination with on-the-ground sampling, they determined that the presence of wild animals in many ecosystems can trigger feedback effects that modify a landscape’s capacity to absorb, release, or transport carbon, increasing or decreasing rates of biogeochemical processes by as much as 250 percent. Animals and their behavior, the study found, must be considered when evaluating the carbon budget of a landscape.

These findings could prove critical as researchers evaluate the potential role ecosystems play in mitigating climate change. The carbon cycle — the exchange of carbon through the biosphere — has been greatly altered in recent decades as humans and their activities have become the primary movers of carbon by releasing harmful greenhouse gases into the atmosphere. Our oceans — which contain roughly 50 times more carbon than the atmosphere, according to the Marine Conservation Institute — are having to absorb more atmospheric carbon, creating higher water temperatures and transforming the chemistry of the water.

With no precedent for these scenarios, there is no definitive solution. But Schmitz believes Canada’s boreal forest might hold some clues for how animals — particularly predators — can make a difference. 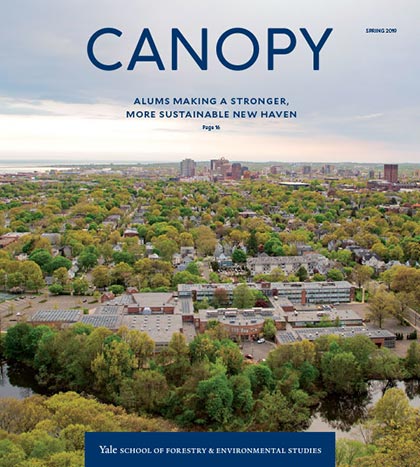 This article originally appeared in the spring 2019 edition of Canopy magazine.

Some things have become synonymous with Canada: politeness, hockey, maple syrup. Moose, too, would probably fit into that category.

Estimates put the number of moose in Canada at nearly 1 million, fanned out across almost all of the country’s provinces. They are enormous creatures — on average, moose stand well over 6 feet tall and can weigh more than 1,400 pounds, making them the largest land mammals in North America. That means a lot of mouths to feed, many times a day.

“Moose in high abundances are quite damaging,” said Schmitz. Moose feed heavily on woody vegetation throughout the boreal forest, favoring shoots and leaves from trees. This hinders the ability of plants to photosynthesize, reducing their ability to absorb carbon from the atmosphere. Furthermore, cold soil in the boreal forest makes for an ideal carbon cycle, as plants not only absorb carbon to produce clean air, but the absorbed carbon gets stored underground, keeping it from escaping into the atmosphere. If this carbon cycle is undisturbed, Schmitz estimates that the entirety of Canada’s boreal forest ecosystem can store enough carbon each year to offset all of the country’s yearly fossil fuel emissions. (Canada is one of the 10 highest carbon emitters in the world.)

Efforts are now being made across Canada to control the moose population, almost entirely through recreational hunting. But little effort is being made to conserve the primary predator of moose, the wolf, which can exert important control over moose populations.

The reason for that, Schmitz said, is because wolves also kill caribou, a highly threatened species and also culturally significant animal in Canada. Factors like oil and gas development and logging have forced moose to migrate across and into new landscapes to find food — landscapes that are home to caribou. As moose have expanded their territory, wolves have followed, with the caribou becoming collateral damage.

So, what to do? An article in the August 30, 2017, issue of The New York Times highlighted a study led by Robert Serrouya, a biologist at the University of Alberta, that monitored the three species in British Columbia for a decade. The findings of that study posited that by hunting moose, there would be fewer wolves and more caribou. Some conservation organizations and wildlife management agencies, Schmitz said, have advocated for cutting out the middleman and simply hunting wolves.

Eliminating the predator from the equation, however, could mean devastating consequences for the carbon cycle.

“This should be a win-win,” said Schmitz. “Not only could we conserve all of the animals and conserve biodiversity, we would maintain their functional roles and conserve the landscape’s entire ecosystem. This would protect that carbon cycle.

“Top predators are already disappearing at a rate faster than other species. Yet at the same time, we’re learning the profound importance they have on functioning ecosystems. Their loss could diminish opportunities of managing climate change in the future.”
In late 2018, Kristy Ferraro, a doctoral student at F&ES, had the opportunity to attend the North American Caribou Workshop in Ottawa, Ontario. The annual conference attracts representatives from academia, government, NGOs, business, and indigenous communities with the goal of teaching and learning about the endangered caribou.

Ferraro, who works in Schmitz’s lab, has focused her studies on nutrient cycling within caribou populations. As populations decline, nutrients that caribou transfer with them as they migrate could be reduced within ecosystems. Exactly how much of these nutrients is transferred — and the effect a reduction would have — is entirely unknown.

Ferraro attended the workshop to learn more about caribou, but one of her main takeaways was how contentious the animal has become.

“Watching the industry side and the science side and the indigenous side try to communicate — there was a lot of tension,” said Ferraro, who conducted field research on caribou on Newfoundland’s Fogo Island last summer. 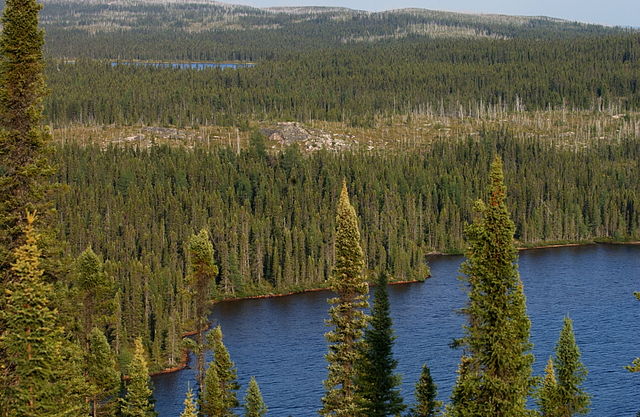 It's estimated that Canada's boreal forest ecosystem can store enough carbon each year to offset all of the country's yearly fossil fuel emissions.
Getting these different sides on the same page may be the hardest obstacle of all. As the oil, gas, and mining industries open up more of Canada’s landscape, they take away more of the caribou’s habitat. These early-stage forests attract more moose to feed, which in turn attracts more wolves, who have an easier time hunting moose and caribou in a more open area. Environmentalists see a threatened species under siege but don’t consider carbon storage. Policies differ from province to province and region to region, making it difficult to create a unified strategy. Heels have been dug in.

“Oil and gas are focused on the ground, foresters think about the trees, policymakers don’t see the interconnected system,” Schmitz explained. “We’re not thinking about this coherently. Then something bad happens, and we say, ‘Oops, how do we fix it?’ We should be heading these problems off before they start.”

Schmitz hopes his research can be used to do just that. He has begun collaborating with F&ES faculty members Ben Cashore and Eli Fenichel to derive new ways to economically value these animals, their functional roles, and carbon cycling and to think through the complexity of it all to help policymakers be proactive. He is also beginning to collaborate with a colleague from the University of Montana to begin remote sensing animal movements across boreal landscapes to paint a clearer picture on nutrient transferring. He also works with students in his lab, including Barnes and Julia Monk, a Ph.D. student researching predator-prey relationships and carbon cycling in Argentina, in order to expand the data beyond Yale-Myers and Canada’s boreal forest.

With climate change looming as the world’s foremost issue in the coming years, Schmitz says there is “quite a bit of urgency” attached to this research. And while balancing the relationship among moose, wolves, and caribou is not going to reverse years of damage caused by carbon emissions, avoiding yet another “oops” moment can only help to build a path toward a more sustainable ecosystem in the future.
“Top predators are already disappearing at a rate faster than other species. Yet at the same time, we’re learning the profound importance they have on functioning ecosystems. Their loss could diminish opportunities of managing climate change in the future.”
— Oswald Schmitz