In Measuring Gas Exchange
Between Water and Air, Size Matters 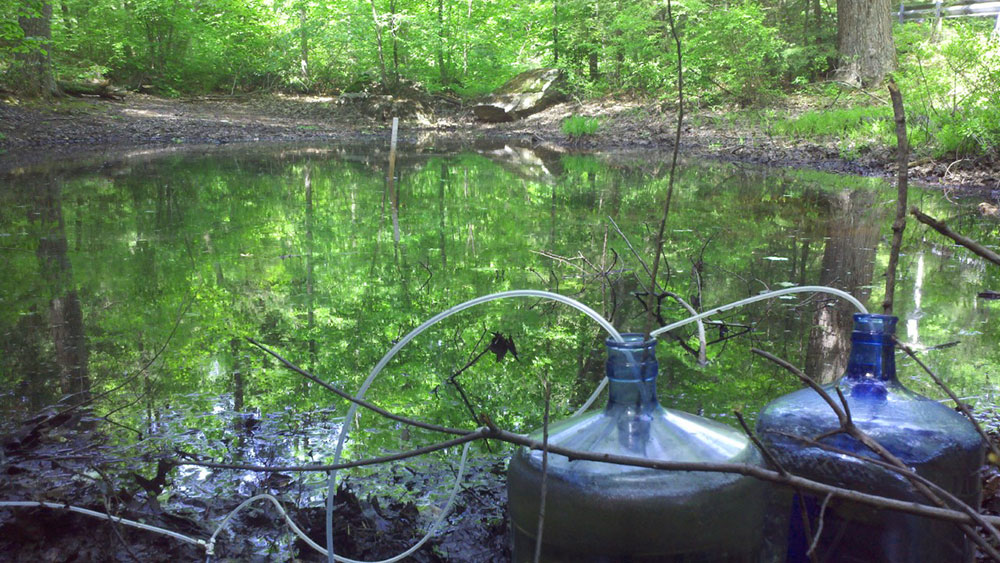 Courtesy of Meredith Holgerson
One of the ponds studied by researchers. In the foreground are the jugs they used to disperse propane in the ponds during the experiments.
Ponds and lakes play a significant role in the global carbon cycle, and are often net emitters of carbon gases to the atmosphere.  However, the rate at which gases move across the air-water boundary is not well quantified, particularly for small ponds.

A new Yale-led study evaluated how the size of ponds and lakes affects gas exchange rates, which may have implications for carbon emissions and global climate change.

The study, appearing in the Journal of Geophysical Research — Biogeosciences, suggests that the size of water bodies can affect the rate at which greenhouse gases, such as carbon dioxide and methane, move from ponds and lakes into the atmosphere.

Although gas exchange in larger lakes can be predicted by wind speed, this relationship breaks down under low-wind conditions, such as in small ponds, said Meredith Holgerson ‘16 Ph.D., a recent graduate of the Yale School of Forestry & Environmental Studies (F&ES) and lead author of the study.

“We found that we can’t easily predict gas exchange rates in small ponds, and that variability in gas exchange increases with lake size,” said Holgerson, who conducted her research while at Yale and is now a research fellow at Portland State University. “This is important because gas exchange variability is not well accounted for in global models of greenhouse gas emissions from inland waters, but needs to be.”

Researchers measured the rate of gas exchange between water bodies and the atmosphere — also known as gas transfer velocity — at four small ponds in the Yale-Myers Forest in northeastern Connecticut. They then compared gas exchange rates from 67 ponds and lakes around the world and found that both gas exchange rate and variability increased with lake size.

Their results indicate that exchange rates are variable within and among different sized ponds and were not well predicted from environmental variables such as wind, rainfall, and temperature. Scientists say that quantifying the gas exchange rates of ponds and lakes is critical for better estimating greenhouse gas emissions from inland water bodies.