Leung, Champion for Inclusion and Equity, Honored with 2017 Kroon Cup

Jessica Leung ’17 M.E.M. has received the 2017 Kroon Cup, which recognizes individuals who embody stewardship and implement projects that engage and inspire the larger F&ES community.

The F&ES community last week awarded the 2017 Kroon Cup to Jessica Leung ’17 M.E.M., who has worked tirelessly to make the School and the environmental field more inclusive and equitable. 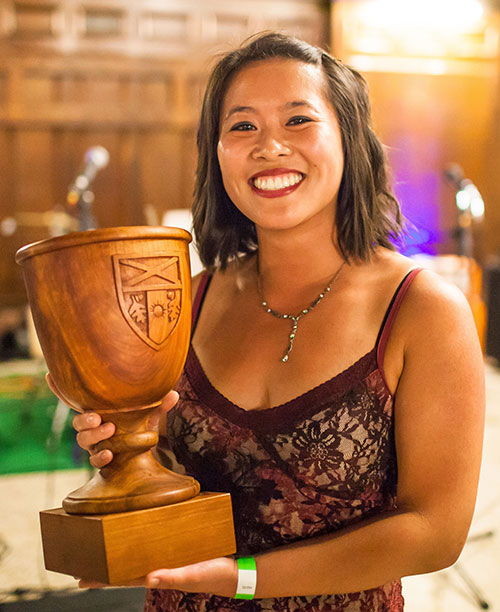 Jessica Leung holds the Kroon Cup.
Leung, a second-year student, has served on the EQUID (Equity, Inclusion, and Diversity) committee, the School’s task force for diversity and inclusion, and was a strategic planner for ELM (Environmental Leadership Mentoring), a mentoring program that links F&ES alums with students.

With EQUID she has twice led the Green Careers, Women Leaders event, during which F&ES students share leadership skills with young women from across the region and showcase the variety of environmental career paths available to them.

Leung has also served on the Graduate and Professional School Senate, worked as an F&ES teaching assistant and peer mentor, advocated for LGBTQ rights and women’s rights, and played a lead role in Community Day, a September event that helped master’s students and Ph.D. students meet their peers.

“Jess Leung has truly made her mark at F&ES,” wrote her nominator. “Jess has helped plan and host numerous innovative events that span across grad schools, genders, ages, and professions in a way that truly enriches our community.”

Awarded each spring, the Kroon Cup recognizes individuals who embody stewardship and implement projects that engage and inspire the larger F&ES community. The winner is selected by a vote by the school’s students, staff, and faculty.

Leung was honored during the School’s End-of-the-Year Party at the Commons on April 28.