As an F&ES student, Jim Lyons ’79 M.F. was advised to branch out and take classes that didn’t focus on just forestry. After 40 years in education, conservation, and politics, the Distinguished Alumni Award winner reflects on how important that advice has been for his career.
By Josh Anusewicz
Bill Clinton. Leon Panetta. Sally Jewell. Katie McGinty. D.M. Smith.

Jim Lyons ’79 M.F. has been fortunate to count a number of visionary leaders, colleagues, and mentors on his winding career path through higher education, conservation, and politics — and he credits them with helping him reach each step along the way. 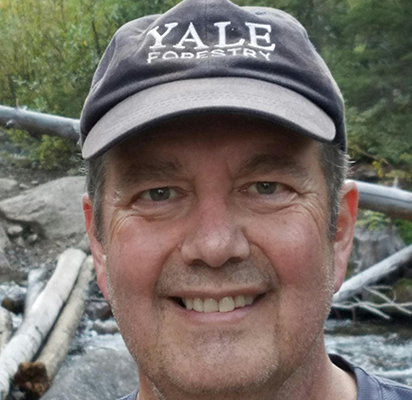 Jim Lyons
But more so, he credits F&ES with providing him the knowledge and skills that were fundamental to his successful career. “My experiences at Yale gave me the confidence to capitalize on the opportunities that presented themselves,” said Lyons of his broad career arc. “Today, that idea is a bit more common — being interdisciplinary.”

The impact of F&ES on his career is the reason Lyons remains tightly connected to the School, participating in panel discussions and, for nearly 20 years, serving as lecturer at the School. For his deep connection to F&ES and his illustrious career, Lyons will be honored with the Distinguished Alumni Award from F&ES at Reunion Weekend 2019.

The long road — and his passion for conservation — began in rural northern New Jersey, exploring the forests near where he helped his father build his family home. Lyons recalls his father, who worked two jobs — a police officer and a carpenter — taking  the opening day of trout fishing season off from work each year to enjoy time with his son outdoors. His love of nature borne, Lyons realized years later, as a student at Rutgers University, that he could study wildlife and natural resource management and turn his passion into a career.

It was at Rutgers that his connections began to fall into place. Two faculty members were F&ES graduates — Richard West ’42 and Jim Grace ’72 — and steered Lyons to attend the School to further his environmental studies. Once there, he fell under the tutelage of Stephen Kellert ’71 Ph.D., one of his personal heroes, and was advised by D.M. Smith.

Smith, Lyons said, was the one who suggested he broaden his education beyond forestry and explore a diverse set of disciplines. “He told me, ‘If you really want to be a good forest manager, you should take courses in different fields. Managing forests is as much about managing people as it is managing the natural resource.’”

Lyons heeded the advice of the legendary silviculturist and benefitted from the relationship he developed with Kellert in the emerging field of human dimensions in wildlife management. He would end up as a research assistant for Kellert, who helped him secure his first job with the U.S. Fish and Wildlife Service in Washington, D.C, after graduation.

From there, he became policy director for the Society of American Foresters, then a member of the professional staff for the U.S. House of Representatives’ Agriculture Committee, as well as an agricultural advisor for then-Congressman Leon Panetta. His work in Congress on the controversial spotted owl/old-growth forest controversy in the Pacific Northwest caught the attention of President-elect Clinton and Katie McGinty, then a science fellow under Vice President-elect Al Gore who would go on to be the first woman to head the Council on Environmental Quality. Lyons was recruited by McGinty to develop the strategy that led to resolution of the controversy, and was then tapped by President Clinton to serve as Undersecretary for Natural Resources and Environment in the U.S. Department of Agriculture. In that role, he oversaw the U.S. Forest Service, helped establish the Natural Resources Conservation Service, and led efforts to refocus national forest management on ecosystem health and advance President Clinton’s “roadless rule” to protect 58 million acres of remaining national forest roadless lands.

In 2000, Lyons returned to F&ES as a Professor in the Practice of Natural Resource Management. He left in 2003 to manage a new non-profit in Washington, D.C., focused on urban forestry and introducing disadvantaged youths in in the city to conservation. After a spell in international development at Oxfam America and helping advance a wildlife-friendly renewable energy plan at Defenders of Wildlife, Lyons returned to government.  Working in the Department of the Interior for Secretary Sally Jewell, Lyons was appointed deputy assistant secretary in charge of public land management. There, he helped lead the effort to develop a landscape strategy to conserve the greater sage-grouse in the western United States and avoid the need to add it to the endangered species list.

Lyons has since left national politics, but he still remains busy. He served as a senior fellow at the Center for American Progress until last summer. His expertise on environmental issues can occasionally be read in publications like High Country News and The New York Times. At home in Maryland, he’s actively involved in efforts to protect the Chesapeake Bay. Often, he is on the road supporting his wife, Jennifer Palmieri, former White House Director of Communications, and author of the bestseller Dear Madam President.

When time permits, you’ll find Lyons at that house that he helped his dad build in northern New Jersey, bordering a 34,000-acre state park in the New Jersey highlands where he continues to write, hike, and explore as he did in his childhood. It’s where everything started, and a perfect place to reflect on everything that has been — and what could be.

“Hopefully, this landscape will remain as it is, so others can come to appreciate what nature has to offer and commit to protect places like this,” he said, staring out from his back porch.

Because of people who’ve dedicated their careers to conservation — like Jim Lyons — there’s a good chance both will come true.