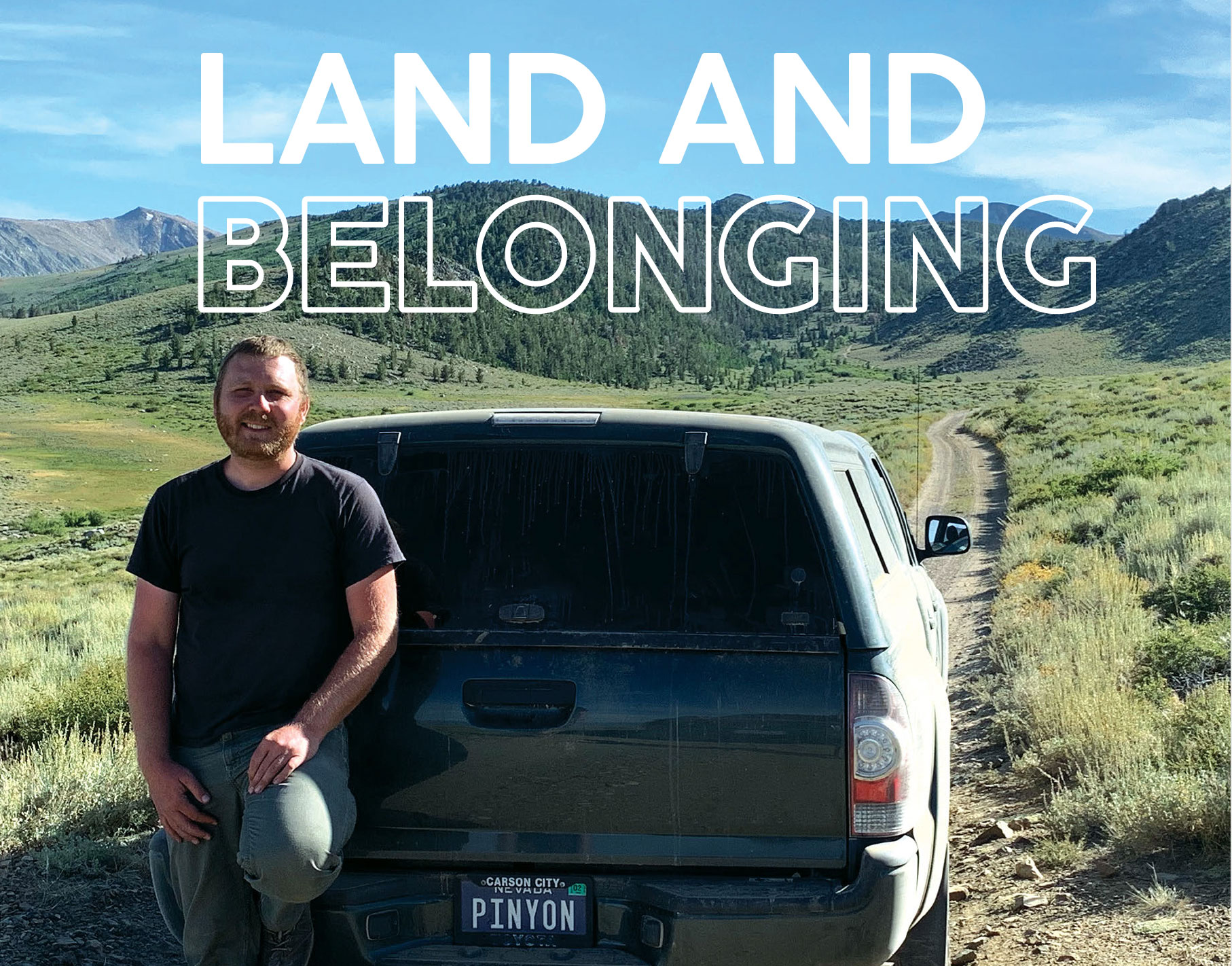 Doctoral candidate Paul Burow uses an ethnographic approach to understanding the complicated dynamics behind land use in the American West — hoping to translate his observations into a blueprint for effective collaboration that advances the sovereignty of Indigenous peoples.
By Dylan Walsh ’11 MEM
Since Paul Burow enrolled in the Yale School of the Environment as a Ph.D. student in 2016, he has been exploring a palimpsest of claims to land in the American West. He is focused specifically on the Walker River Basin along the Nevada-California border and on three groups with disparate and often conflicting interpretations of the land’s value: Indigenous tribes, ranchers, and federal land managers from the U.S. Forest Service.

“The land-use politics in this area, and around this tree [the pinyon pine], are quite complicated,” says Burow, a combined-degree doctoral candidate in the Yale School of the Environment and the department of anthropology. “That’s what my dissertation is trying to get at.”
At the center of Burow’s research are four “nonhuman figures,” as he puts it: pinyon pine, sage grouse, cattle, and cheatgrass. For the Paiute of the Walker River Basin, pinyon pine anchors their view of the landscape — it is the species that informs much of their interaction with the natural world. For ranchers, pinyon can be competition to plants that cattle use as forage, and they have historically sought removal of the trees and replanted with non-native crested wheatgrass.

“Ranchers simply have a different orientation toward trees,” Burow says. “For them, cattle are at the center of the landscape.” Meanwhile, these landscapes have also experienced a decline in the iconic sage grouse, and arresting the decline of sage grouse through the eradication of pinyon forests has been a core goal of local land management agencies for the past 25 years. The explosive spread of invasive cheatgrass threatens all three of these interests — and it’s the knotty and fragile relationship among these four things that interests Burow.

“Paul is examining the issue of who — people, plants, and animals — is seen as ‘belonging’ in the U.S. West and who isn’t,” says YSE Professor Michael Dove, one of Burow’s thesis advisors. “And the perception of something as belonging or not has enormous implications for environmental conservation.” 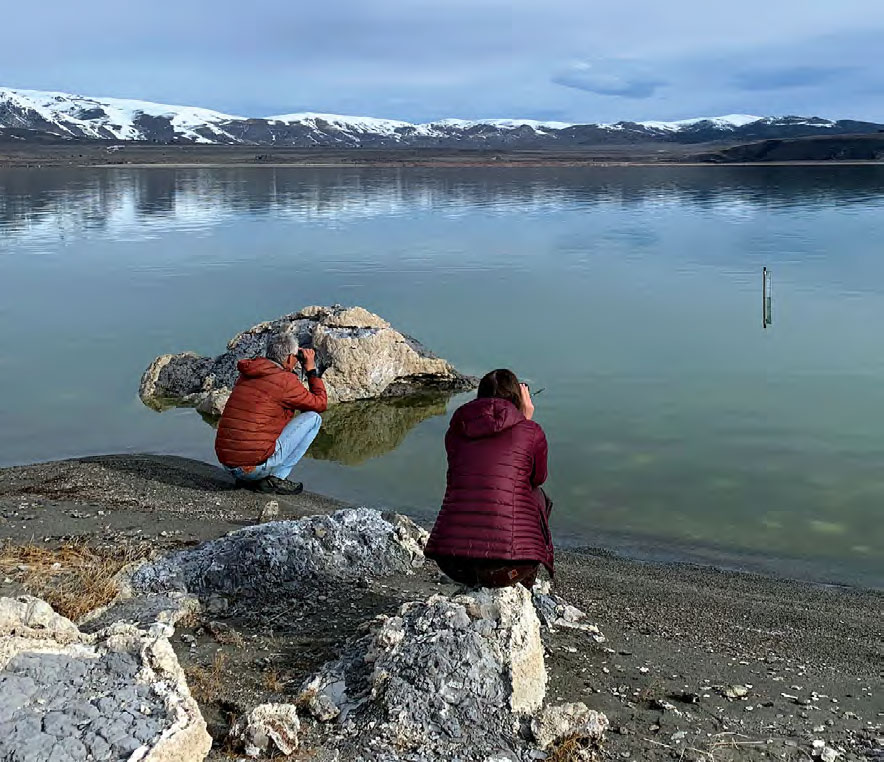 Environmental monitors check levels of California’s Mono Lake for its annual April reading.
Archival research and personal interviews help Burow shed light on this issue of belonging, but the methodological foundation of his work is ethnography. He has spent months shadowing Forest Service employees; he has logged countless hours from a desk in their Bridgeport, California, office; he has attended staff meetings; and he has hiked with rangers to observe the assessment of public land. He has spent months with members of the Paiute tribe, as well, sitting with them in their homes, collecting traditional plants with them, harvesting pine nuts, and embarking on a pilgrimage-like walk to Yosemite.

“This is the value of ethnography,” Burow says. “You wrap yourself in the daily work and routines of a group of people and, that way, start to see the world as they do.”

Burow’s desire to understand competing interests in the Walker River Basin springs from the confluence of personal history and professional experience. As a kid from Sacramento, Burow had a deep family connection to the wilderness of eastern California; he spent summers hiking and backpacking less than 30 miles from the Walker River, near the Carson River, where his family owns a cabin.
Burow ultimately hopes to translate the findings of his research into more complementary and inclusive land management practices. One way to do this is to move beyond the statutory process of “consultation,” by which federal agencies must discuss their management plans with Indigenous groups. “These consultations are of questionable value when not treated seriously,” Burow says. “They’re generally treated as a box to check.” Instead, he’d like to see the widespread establishment of genuine partnerships, with Indigenous groups allowed to manage public lands beyond the borders of their reservation. One example of this at work is the Yakama Nation of eastern Washington, which has been contracted by the Forest Service to reduce fire risk on lands adjacent to its reservation. What if the Paiute nations were given similar powers in managing pinyon forest?

“In the end, a tremendous amount of knowledge exists in these communities,” Burow says. “That’s something we’ve failed to heed in land management, but there is an opportunity to revitalize.” 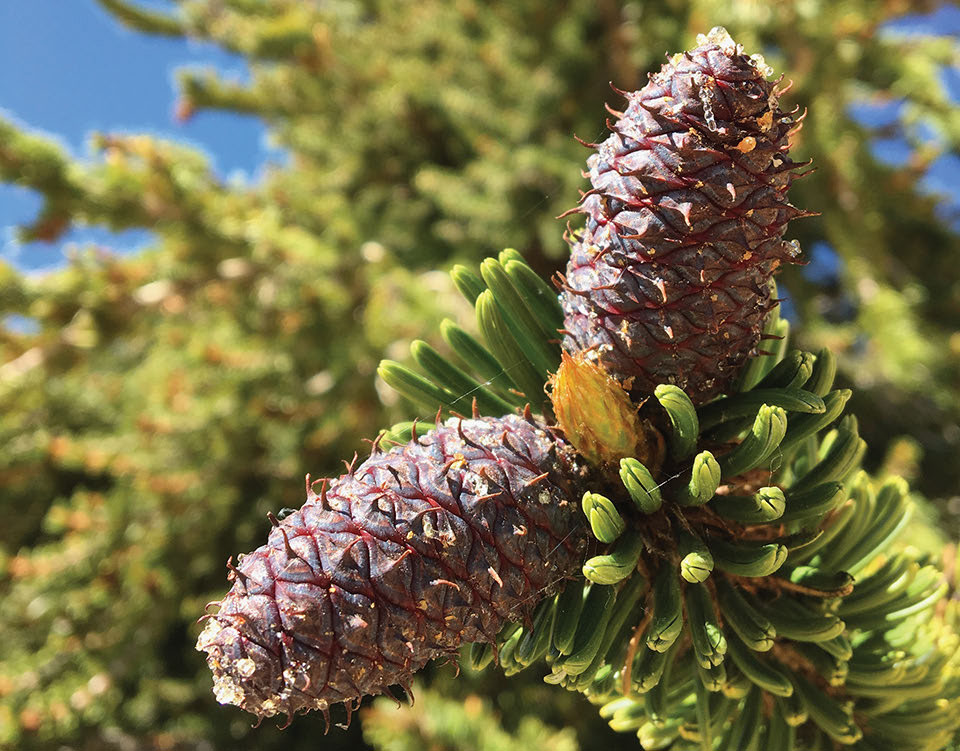 Maturing bristlecone pine cones in the Ancient Bristlecone Pine Forest in California’s White Mountains.
This past March, COVID-19 put the brakes on Burow’s work. While waiting for the pandemic to abate, he has worked with his thesis advisor YSE Associate Professor Justin Farrell and YSE doctoral student Kathryn McConnell on the Rural West Covid Project. Funded by a National Science Foundation rapid response grant, the project investigates how rural communities in 11 Western states are grappling with COVID-19. The first survey, from the summer, asked a broad range of questions about the effects of the virus on daily life and on trust in government institutions; a second survey, planned to run soon, will ask officials in local government about the repercussions they’ve experienced in their communities.

As of this fall, though, Burow began working in the archives and focusing on his dissertation again. He aims to return to ethnography — “the opposite of social distancing” — next year, during which he’ll spend much of his time with ranchers. His graduation is set for 2023.

That date signals to Burow neither the end of something old nor the beginning of something new. “My commitment to this place and its people and issues is lifelong,” he says. “My hope is that this research opens up opportunities to reintroduce the kinds of management practices seen on this land for thousands of years — and that, by doing this, the sovereignty of Indigenous nations will be respected.”