Skip to main site navigation Skip to main content
Home » News » ‘Let the Rodent Do the Work’: Reflections of a Beaver Believer

‘Let the Rodent Do the Work’:
Reflections of a Beaver Believer

Author Ben Goldfarb ’13 M.E.M. says the near eradication of the once ubiquitous North American beaver had a profound impact on the continent’s landscapes and ecosystems. Now, he says, restoration of beaver populations can help humankind fight drought, improve water quality — even address climate change.
By Kevin Dennehy 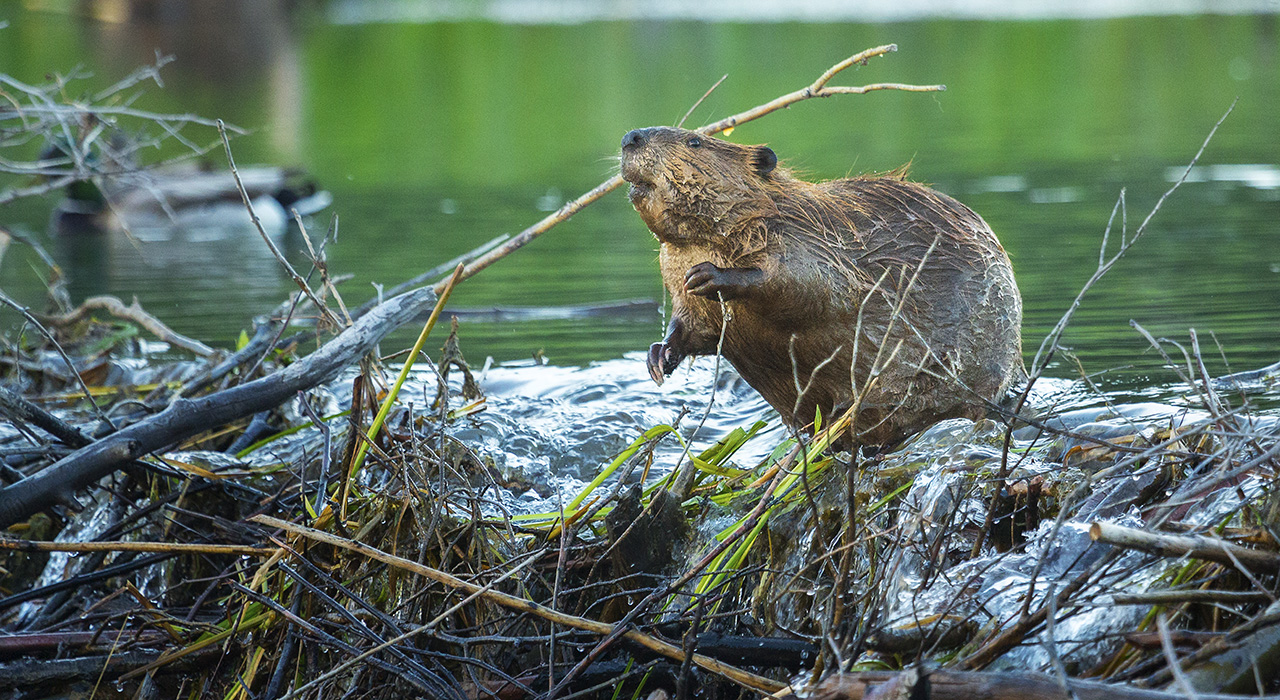 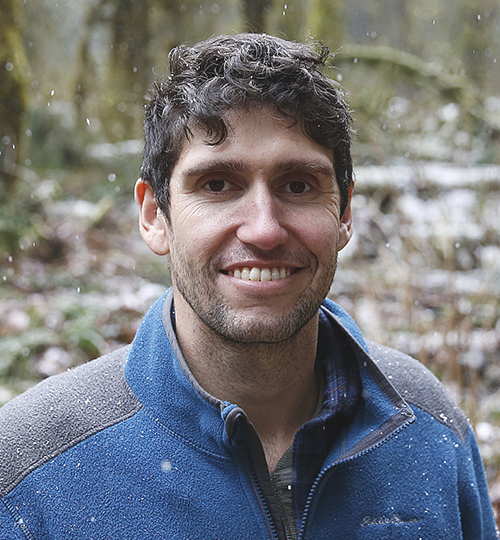 Ben Goldfarb
Ben Goldfarb ’13 M.E.M. had just graduated from Yale when it occurred to him that his conception of what makes a healthy landscape was completely wrong. But then again, that’s true of most contemporary Americans, he says. Why? Because most of us can’t comprehend what North America looked like before fur traders arrived, trapping millions of beavers from the continent’s rivers and lakes.

In his new book, “Eager: The Surprising, Secret Life of Beavers and Why They Matter,” Goldfarb makes the case that the near eradication of these once ubiquitous rodents had a profound impact on the continent’s landscapes and ecosystems. In an interview, he describes the vital role of these “ecosystem engineers,” how a growing coalition is trying to restore their populations, and how this animal can help humankind fight drought, improve water quality — even address climate change.

“This animal can provide us a huge amount of help… if we learn to work with it, to coexist with it, to outsource some of our labor to it,” Goldfarb says.

Why did you decide to write about beavers?


Ben Goldfarb: Like most people who have spent a lot of time outside, I’ve always had some baseline interest in beavers. But I didn’t really become a “beaver believer” — as we beaver-lovers call ourselves — until a few years back. After graduating from F&ES, I was living in Seattle, where I was able to spend some time with a Forest Service biologist named Kent Woodruff. At the time Kent was director of the Methow Beaver Project, in central Washington, which live-traps “nuisance beavers” — animals that are blocking up culverts, flooding yards, or cutting down trees. The project relocates those beavers to headwater streams high in the Okanagan-Wenatchee National Forest. The idea is that up there the beavers can create fantastic wildlife habitat and store water without damaging private property.

Being out there with the Methow Beaver Project team — particularly with Kent, who is a gifted interpreter of the landscape — I realized that my mental model of what aquatic ecosystems should look like omitted beavers. I started to realize that beavers are a really important landscape-scale actor in North America, and that I needed to revise my conception of a healthy stream to include these incredible rodents.

The transformative role of beavers on the landscape became muted, of course, because the animals themselves largely disappeared. When did that happen? 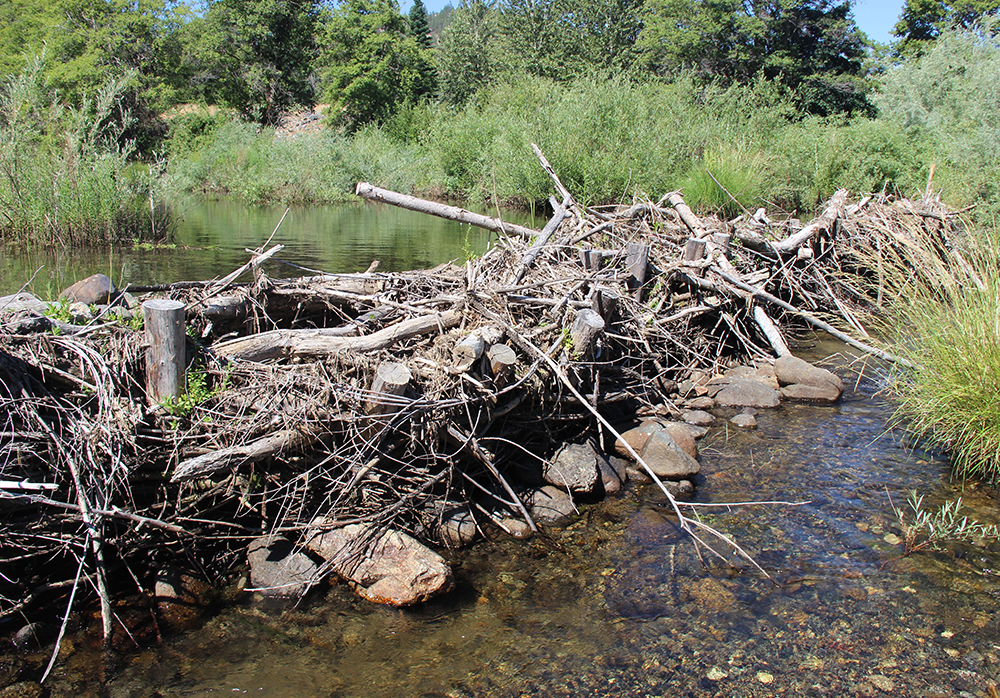 Photo by Ben Goldfarb
A beaver dam analogue, a joint creation of human and beaver labor, furnishes coho salmon habitat in California’s Scott Valley.
Goldfarb: It really started in the early 1600s, when the first European fur traders arrived in North America and basically went about ransacking the continent’s beavers. Europeans trapped beavers out of every single river, stream, lake, and pond they found, or traded for pelts with Native people. And as beavers vanished the wetlands they created dried up. Streams eroded. Untold millions of acre of watery habitat was lost. By the time the second wave of farmers showed up a few decades later, North America had been permanently transformed by the fur trade. Colonists came to internalize this much drier, beaver-less landscape as natural. It’s a classic case of the “shifting baseline syndrome,” as ecologists say; every generation accepts a bit more environmental degradation as natural. We lost countless beaver-created ponds and wetlands without realizing the extent of the destruction.

As a result, when we envision a stream as a clear, clean, straight, shallow, narrow thread running through the landscape, we forget to include the network of ponds and wetlands and side channels that beavers would have created. It wasn’t until the last couple of decades, really, that scientists started taking a second look at landscapes and recognizing that they’re missing one of their primary ecological actors. Aquatic ecosystems would have been much more complex than they are today.

Those trappers obviously saw beavers a commodity. But as you write, there emerged a hostility to beavers even after the fur trade disappeared.


Goldfarb: We tend to feel hostile towards animals that cohabitate well with us. Beavers, in some ways, are a lot like us. Just as we modify our own surroundings to maximize our food and shelter, beavers are relentlessly driven to change their environment as well. The problem is that their vision of a healthy landscape doesn’t jibe with ours. We like to build towns and farms and roads in floodplains, while they like spreading water all over those floodplains. The inevitable result is conflict, and, in most cases, the offending beavers get killed. We’re consistently hostile to this animal that’s nearly as bold and ingenious as we are.

How exactly do beavers transform the land? And what did North American landscapes look like before the fur trade?


Goldfarb: The classic beaver behavior that every school kid knows, of course, is that they build dams. The purpose of those dams is to create ponds and wetlands that provide shelter. A beaver on land is a slow, fat, waddling snack for wolves and bears and cougars. By contrast, beavers are incredibly powerful and agile swimmers. So building dams increases the extent of the watery habitat in which they’re safe.

In so doing, they inadvertently create huge amounts of habitat for other creatures as well. Water is life: In the American West, wetlands cover just 2 percent of the land area but support 80 percent of the biodiversity. It’s hard to name an animal that doesn’t benefit from beaver-built habitats in some way. Frogs and salamanders breed in beaver ponds. Juvenile trout and salmon use ponds as rearing habitat. Waterfowl forage in beaver ponds and even nest directly atop beaver lodges. Moose hang out in beaver ponds to cool off. Woodpeckers will use dead trees killed by rising water levels. There’s just this incredible array of species that has evolved to take advantage of beaver engineering.


While beavers were nearly wiped out, you also call them one of the great success stories of the conservation movement. How have populations recovered so successfully over the past century? 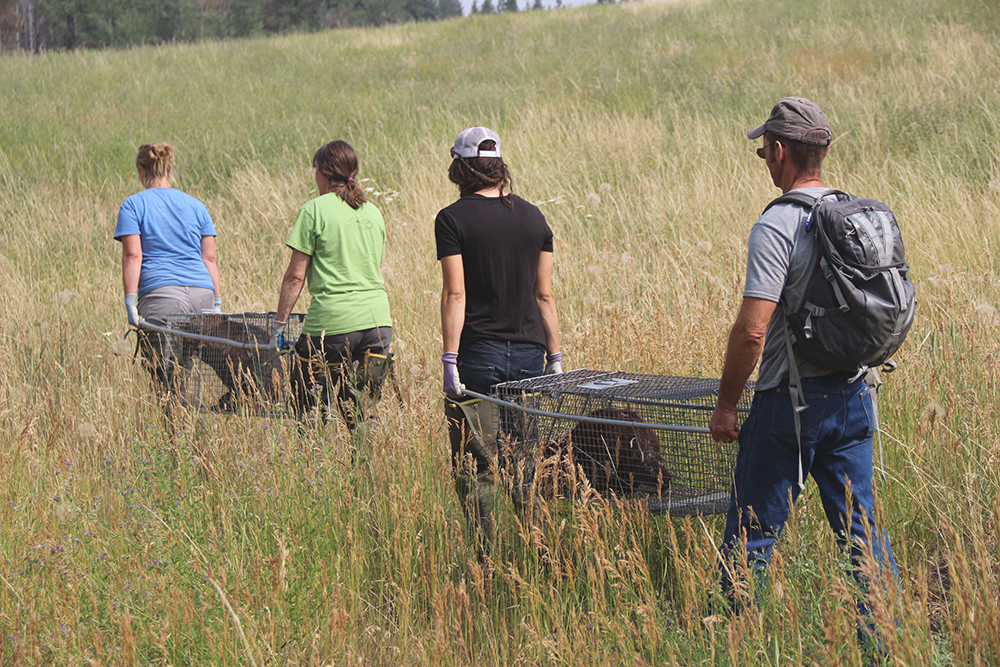 Photo by Ben Goldfarb
Wildlife scientists prepare to release a beaver into Washington’s Methow Valley.
Goldfarb: The most important factor is that they’re really resilient animals. They’re rodents, so they reproduce pretty readily. They disperse widely. And they’re good at making their own habitat. They were also assisted by humans: In the early 1900s, naturalists and biologists started to wise up about how important beavers are, and began relocations and reintroductions all over the country.

The most famous beaver relocation occurred in Idaho, where biologists stuck the animals in crates, strapped them to parachutes and dropped them out of airplanes. They air-dropped 76 beavers into the Idaho wilds in 1948, and 75 of them survived. Pretty impressive! In New York the state introduced about 20 beavers from Canada and Yellowstone in 1904. Just 11 years later, there were 15,000 beavers in the region descended from those early relocations. By the 1920s, all of those New York beavers had started to disperse into other states and recolonize the landscape.

To what extent have efforts to restore beaver populations affected these landscapes?


Goldfarb: It depends on the place. There are areas where beavers are doing really well and approaching their historic densities again — and helping to re-water pretty arid ecosystems. But in general beaver populations are still a tiny fraction of what they could be. In Utah, for example, scientists estimate that beavers occupy between 8 and 17 percent of the available habitat. So they’re still at pretty low levels in a lot of places.

People always ask if beavers are endangered. The answer is no: There are perhaps 15 million beavers in North America, so they’re not going extinct any time soon. Their populations are increasing and they’re doing pretty well. But then you think about how ubiquitous they were when Europeans first arrived. Early naturalists estimated that as many as 400 million beavers inhabited the continent. So 15 million starts to look a little depressing. I think we’ve come a long way in recovering beavers, but we also have a long way to go.

How difficult is it for North America’s beavers to coexist with humans now that civilization extends into nearly every corner of the continent?


Goldfarb: For all of my beaver belief, I’m not naive about what a pain in the butt they can be. They can certainly be a challenging species to coexist with. They dam in road culverts, cut down people’s cottonwoods and apple trees, and flood property. So they can be challenging for sure. The way people usually handle those conflicts is by trapping out the beavers, which is problematic because all you’re doing is putting up a vacancy sign for the next colony. One increasingly popular solution is what’s known as a flow device, which is basically a system of pipes and fences. You can pass the pipe through a beaver dam or road culvert, move some water out of the beaver pond, and regulate the height of the pond — hopefully to a level that is acceptable to both humans and rodents. It’s one way to strike a compromise between our two species. One study in Virginia found that for every dollar you spend on flow devices you save $8 in road maintenance and repeated trapping costs. When you also consider in all the habitat that you’re allowing the beavers to generate, it starts to look like a really cost-effective solution.

Have you learned anything about beavers that surprised you? 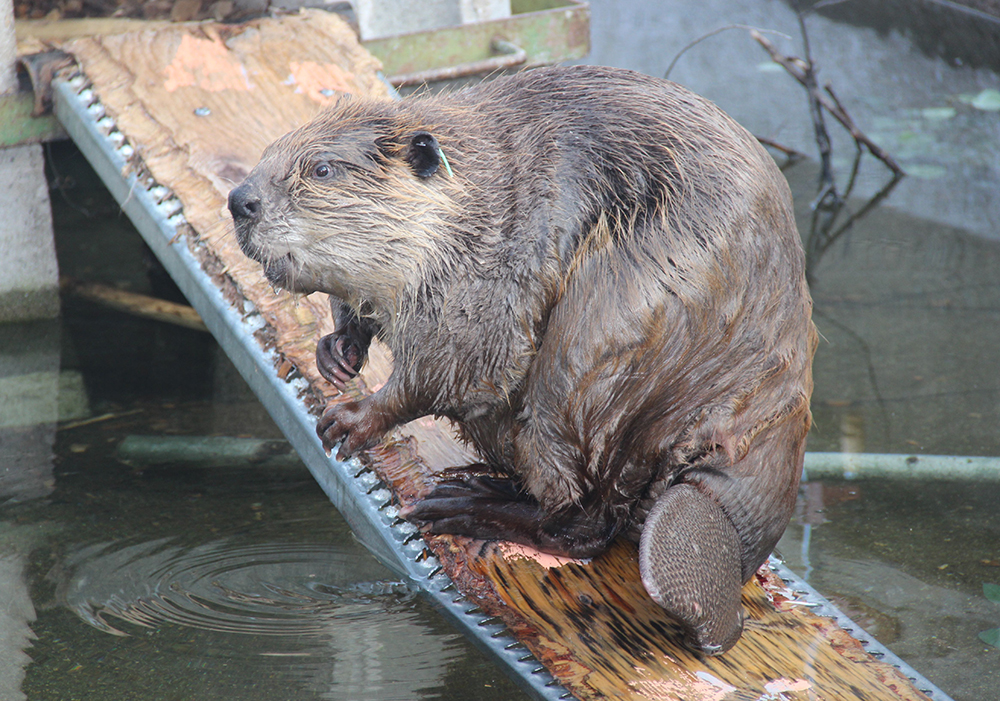 Photo by Ben Goldfarb
Goldfarb: A lot of the “beaver believers” I met are the kinds of people you’d expect to like beavers: conservationists, wildlife biologists, restoration ecologists. But I was surprised to find the number of farmers and ranchers who are also getting into beavers. This is especially true in arid states, like Idaho and Utah and Nevada, where people in the agricultural community recognize that your most important resource is water — and nothing stores water like a beaver. I found a lot of rural livestock producers actually modifying their agricultural operations to facilitate the recovery of beavers, and, as a result, becoming more resilient in the face of drought. It was truly exciting to learn the way the “beaver believer” movement is extending into some unlikely corners of the country.

What lessons can humans learn from beavers as we try to address our own environmental challenges?


Goldfarb: To me the fundamental lesson of beaver restoration, and of the book, is the importance of working with nature rather than against it. As a species our inclination is to dominate nature – to channelize streams, pave over wetlands, and clearcut forests. One of the mantras of those who work in beaver restoration is “Let the rodent do the work.” This animal can provide us a huge amount of help — storing water, improving water quality, creating wildlife habitat, even sequestering carbon — if we learn to work with it, to coexist with it, to outsource some of our labor to it. Rather than dominating the natural world, beaver work is really about cooperating with it. Beaver restoration suggests a new approach to ecological restoration in general — one that is more holistic and in tune with the natural world. 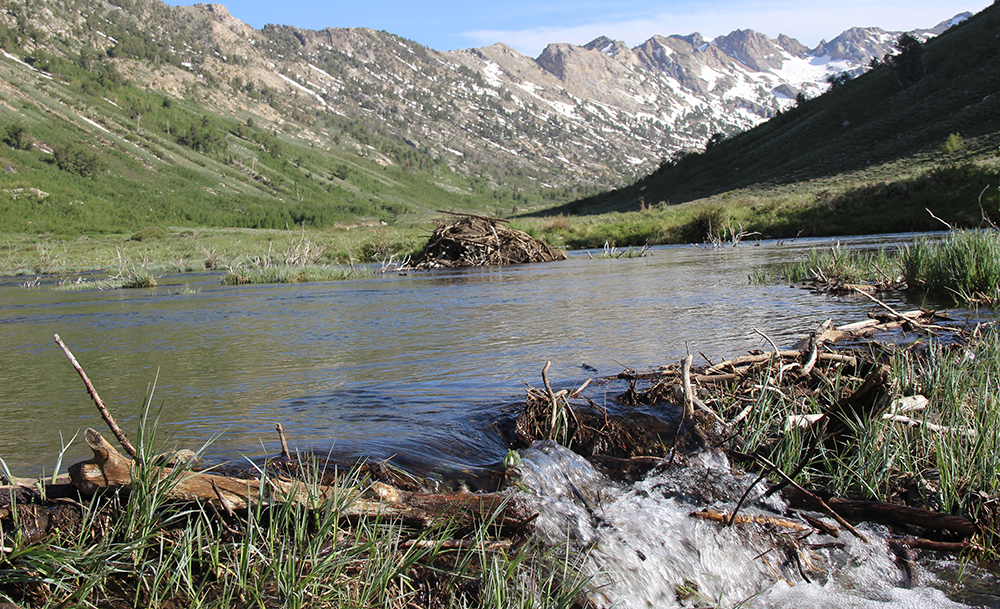