Lewis Cullman ’41 B.A. funded a fellowship that provided opportunities for students to earn a joint doctoral degree with F&ES and the New York Botanical Garden.
Lewis Cullman ’41 B.A. was one of America’s greatest philanthropists, donating hundreds of millions of dollars to the arts, hospitals, libraries, and education institutions with his wife, Dorothy. He quite literally wrote the book on generosity, penning a memoir in 2004, “Can’t Take It With You ­— The Art of Making and Giving Money.” 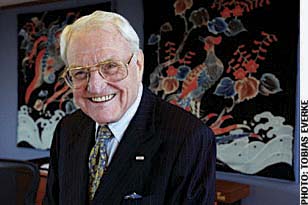 Lewis Cullman
Cullman passed away recently at the age of 100, leaving behind a legacy of generosity that enriched the Yale community, including that of the Yale School of Forestry & Environmental Studies (F&ES).

“We were all saddened to learn of the passing of Lewis Cullman, a man who committed his life to making a better world through his generosity,” said F&ES Dean Indy Burke. “We are so grateful for the deep appreciation he held for the scholarship of our doctoral students and the generous support he provided them over many years. He will always be a celebrated member of our community.”

One of the largest beneficiaries of Cullman’s generosity was the New York Botanical Garden, which received $20 million from him and his wife over many years, according to The New York Times. This relationship helped him establish The Lewis B. Cullman Fellowship, a combined doctoral degree between the New York Botanical Garden and F&ES that trains biological scientists to use an interdisciplinary approach to solving problems associated with tropical environments.

Marlyse Duguid ’10 M.F. ’16 Ph.D., the Thomas G. Siccama Lecturer at F&ES and the director of research at Yale Forests, was a Cullman Fellow from 2011-2016. She also received The Lewis B. and Dorothy Cullman Doctoral Research Award in 2014.

“The joint degree program didn’t just give me the opportunity to study, it connected me with advisors at both F&ES and the New York Botanical Garden,” said Duguid. “Building relationships with these amazing botanists made me a better botanist, and I still work closely with them today.”

Cullman lived a long and colorful life, growing up in a wealthy family but branching out to pursue his own endeavors. He served in the U.S. Navy during World War II, had a strong passion for meteorology, and served on the board of the Metropolitan Museum of Art and The New York Public Library. He is considered a financial pioneer, helming the first leverage buyout in U.S. financial history when he purchased Orkin Exterminating in 1964 and selling the stationary company At-A-Glance to Mead Paper Company for $550 million in 1999.

Cullman was predeceased by his second wife, Dorothy, and is survived by his third wife, Louise, and son, Duncan.
– Josh Anusewicz    joshua.anusewicz@yale.edu    203 436-8994