Student Solar Project Gets Switched On

A few years ago a group of F&ES students designed a “hypothetical” solar project for a class assignment, but for team leader Timothy White ’15 M.E.M. the ambitions were never really hypothetical. He would eventually bring it to his hometown of Cheshire, Connecticut, which recently made the proposal a reality.
By Kevin Dennehy 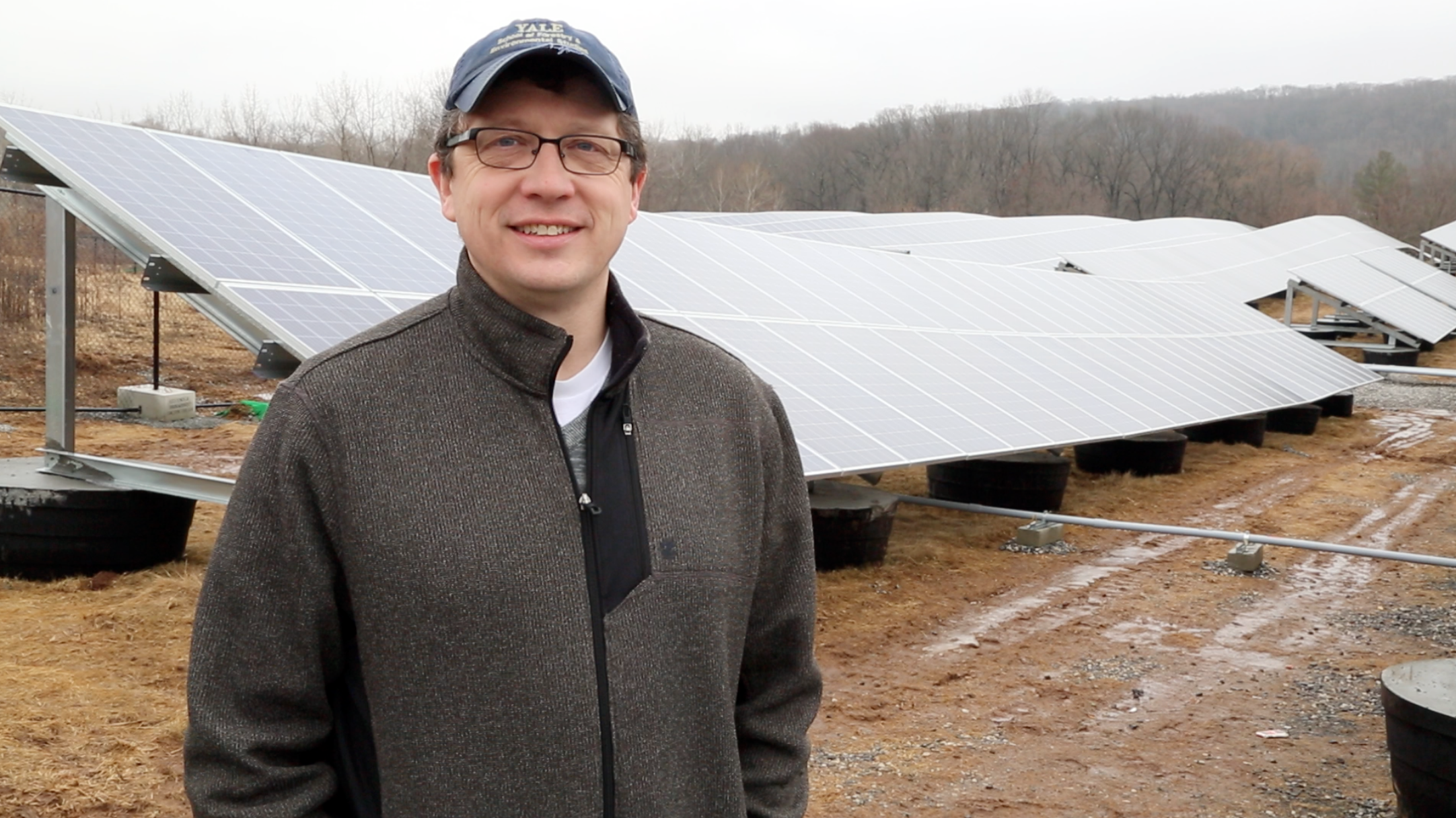 In a pitch that he’d honed as a student at the Yale School of Forestry & Environmental Studies (F&ES), White proposed the construction of a 1-megawatt solar plant atop a five-acre capped landfill, next to a municipal dog park.

According to his plan, a private developer would cover the construction costs in exchange for the town signing a 20-year agreement to purchase the energy. Cheshire, meanwhile, would also be able to meet the power demands for 20 percent of town-owned buildings — and save up to $30,000 annually.

The board liked the idea, and immediately referred it to the town council which eventually approved the project. This spring, having navigated a series of economic, engineering and legislative hurdles, the project — constructed by SolarCity — was finally in the ground and switched on.
“Lots of people come forward with concepts. But the fact is, this proposal put some flesh on the bones.”
— Walter Gancarz, Cheshire town engineer
Town Engineer Walter Gancarz predicts it will save the town $1.3 million in reduced energy costs over the next two decades. And it wouldn’t have happened, he says, if the Yale student team didn’t bring forward what was a well-formed and logical plan.

“Lots of people come forward with concepts,” Gancarz said. “But the fact is, this proposal put some flesh on the bones. It was a pretty easy sell once the economics were laid out, but you need somebody to come up with the plan.”

The course, which has been offered for five years, covers issues related to public electricity from the days of Edison to the present. And each year it culminates with group presentations on hypothetical energy projects aimed at a public utility — or, in this case, to a municipal government. (“In his presentation, Tim kept calling me, ‘Mr. Mayor’!’” Reilly remembers.)

“To be successful the groups have to understand the economics of the project from, in this case, the city’s perspective, but also from their own perspective as developers,” said Reilly. “Because they have to be able to make money from the project, too.

“Ultimately we want them to understand the total value created and the ways to split that up between the utility or client and the development team.”
“Dreams are great, but making them happen at the local level is the important thing.”
— Tim White ’14 M.E.M.
Installing the project took longer than White had hoped. For one thing, the town had to wait for state legislation that expanded virtual net metering credits, which allow customers operating “behind-the-meter” systems, like the solar plant, to transmit surplus power to municipal buildings at reduced costs.

For White, a former Cheshire town council member who now works at F&ES, the project represents the kind of small-scale, local projects that will be needed to achieve a low-carbon global economy.

“Now that this project is live, more than 20 percent of our energy consumption will come from clean energy,” he said. “So there’s not only an economic impact but, from an environmental perspective, we’re having a positive impact.

“Hopefully F&ES alums around the country and the world will be bringing forward similar local projects and making things happen,” he added. “Because dreams are great, but making them happen at the local level is the important thing.”