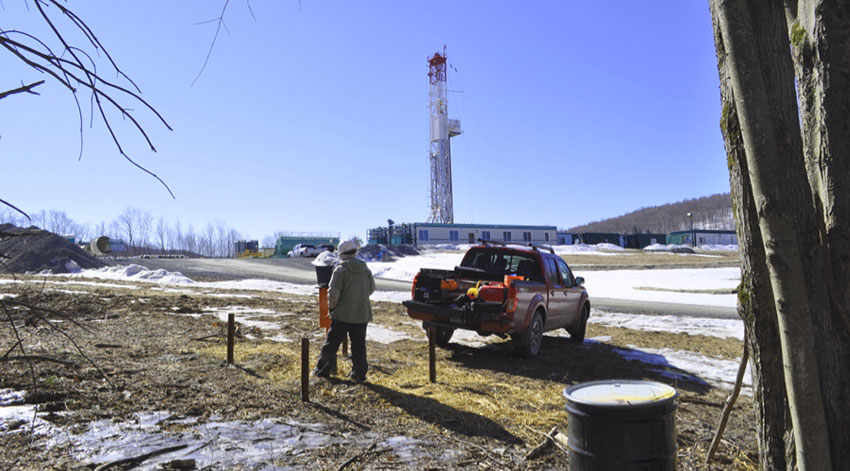 Yale doctoral student, Erica Barth-Naftilan, collects pressure data at a groundwater monitoring well installed adjacent to a shale gas well pad in northeastern Pennsylvania.
While the emergence of unconventional drilling techniques for shale gas — including the process known as hydraulic fracturing — has transformed the U.S. energy landscape, concerns remain over whether these methods contaminate groundwater with methane and other chemicals and affect groundwater flow.

A new Yale study — which monitored groundwater before, during, and after drilling operations within the Marcellus Shale in northeastern Pennsylvania — found that methane concentrations in deep groundwater vary over time and that these variations are likely unrelated to shale gas development.

Past studies have examined impacts to groundwater by testing water from homes that happen to be located near active shale gas wells and then comparing water quality from homes farther from shale gas wells. In contrast, this new study is the first to repeatedly test groundwater quality throughout drilling and hydraulic fracturing operations from the same water wells close to gas well pads.

Given rare access to gas well pads and the schedule of drilling operations across a 25-square-kilometer area, the research team collected water samples monthly at multiple depths from eight groundwater monitoring wells over two years. Locations of the groundwater monitoring wells were carefully selected by researchers based on the regional hydrological system.
“This was an exciting study to work on because it hadn’t been done before — mostly because finding companies willing to let independent researchers monitor groundwater next to their activities is a difficult endeavor.”
— Erica Barth-Naftilan, Yale School of Forestry & Environmental Studies
A formal agreement with Southwestern Energy allowed the researchers access to land near the fracking wells and information on when new wells would be drilled and hydraulically fractured. This enabled researchers to evaluate the quality of groundwater before, during, and after the installation of these gas wells — and in locations of their choosing.

This agreement was a unique collaboration between independent academic researchers and the natural gas industry. In years past, the U.S. Environmental Protection Agency planned similar studies but was unable to identify locations that met their criteria as well as those of industry partners.

“This was an exciting study to work on because it hadn’t been done before — mostly because finding companies willing to let independent researchers monitor groundwater next to their activities is a difficult endeavor,” said Erica Barth-Naftilan, a doctoral candidate at the Yale School of Forestry & Environmental Studies and lead author of the study.

While Southwestern Energy received an advance copy of the study’s findings, the formal agreement assured researchers ownership of the data, independence to interpret findings autonomously, and no restrictions on publication.

According to the study’s findings, published in the Proceedings of the National Academy of Sciences, methane concentrations increased in the deepest parts of the aquifer but were likely the result of natural variability rather than drilling.

The findings suggest that variability in concentration of naturally occurring methane is likely greater than believed, particularly in valley settings where saline groundwater systems interact — through natural cracks in the deep rock — with local freshwater systems, said Barth-Naftilan.

And while they found that water pressure close to shale gas wells dropped abruptly within hours of the start of drilling, the pressure increased back to pre-drilling levels as quickly as it declined. The study also detected a breach in one of the shale gas wells, although researchers found that it produced no lasting impacts on groundwater quality.

“This opportunity to sample before, during, and after drilling and hydraulic fracturing activities has been a missing piece in our understanding,” said Barth-Naftilan. “We found that using our pressure data we can observe when they’re drilling the well and when a breach occurs, but, after two years of monitoring, we don’t see persistent changes in methane that can be linked to natural gas activities.”

The study was co-authored by James Saiers, the Clifton R. Musser Professor of Hydrology at F&ES, and Jaeeun Sohng, a research scientist at F&ES.
– Kevin Dennehy    kevin.dennehy@yale.edu    203 436-4842