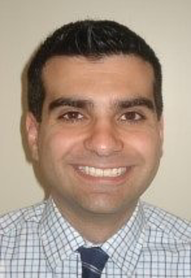 Nedal Nassar
Nedal Nassar ’11 M.E.Sc., ’14 M.Phil., ’15 Ph.D. was recently named a recipient of the Presidential Early Career Award for Scientists and Engineers (PECASE). The award is the highest honor the U.S. government gives to scientists and engineers who are beginning careers in independent research and who show promise for leadership in science and technology.

Nassar is currently chief of the Materials Flow Analysis Section at the National Minerals Information Center of the U.S. Geological Survey (USGS). His team examines the global stocks and flows of non-fuel mineral commodities at each stage of their life cycle; analyzes trends and examines concerns related to foreign mineral dependency; and collaborates with other federal agencies to help them achieve their missions. Their work, he says, provides policymakers and other federal agencies with critical information that ensures the country has a reliable supply of mineral resources.

As a student at Yale, Nassar worked with Thomas Graedel, a professor emeritus and senior research scientist at F&ES who has been a trailblazer in the field of industrial ecology. Today, he credits his time with Graedel for kickstarting his now award-winning work.

“To say that my training and research at Yale played a fundamental role in receiving this award would be an understatement,” said Nassar, who had nearly a dozen papers published during his time as a doctoral student at F&ES. “My research at the USGS has essentially been a continuation and expansion of my graduate research under the tutelage of Professor Graedel.”

Other Yale-affiliated recipients of this year’s award include Elena Gracheva, associate professor of cellular and molecular physiology and neuroscience at the Yale School of Medicine; Mary-Louise Timmermans, undergraduate professor and director of the Geology & Geophysics Department; and Fengnian Xia, an associate professor in engineering and science at the Yale School of Engineering & Applied Science.
– Josh Anusewicz    joshua.anusewicz@yale.edu    203 436-8994