For Johnae McArthur, a University of Connecticut undergraduate and one of five New Haven Promise interns at F&ES this past summer, the experience was more than just a crash course in biogeochemistry or a chance to explore the woods near her hometown. It also set her on a new career path.
By Joshua Anusewicz 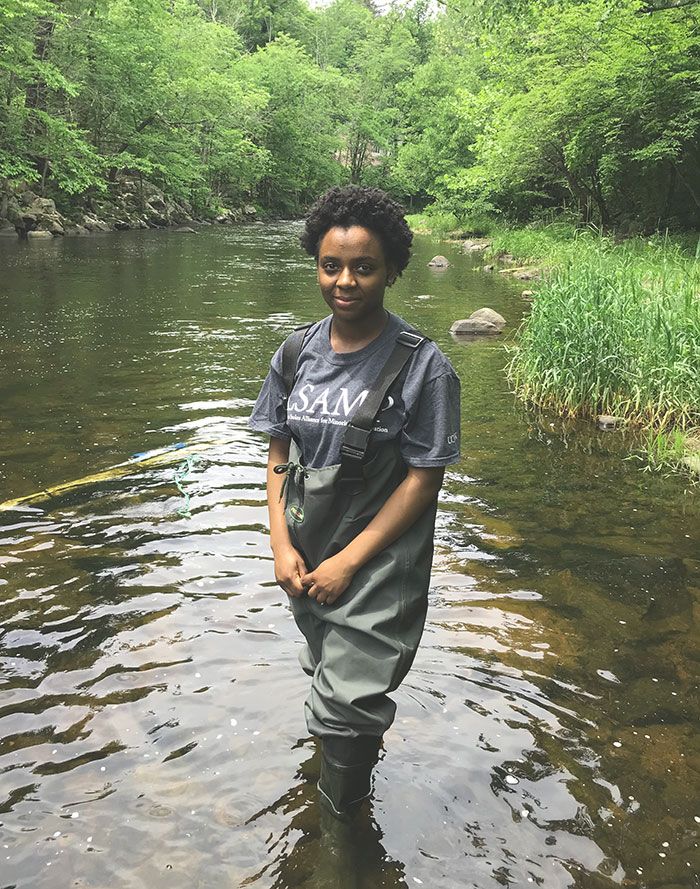 Courtesy of Laura Logozzo
Johnae McArthur
The walk was an arduous one. Bushwhacking through thigh-high brush, ducking low-hanging tree limbs, searching for safe footing on loose rocks and muddy soil.

Johnae McArthur had spent plenty of time outdoors in her life, but wasn’t expecting this kind of challenge in central Connecticut, less than an hour from her hometown of New Haven.

“Couple that with the heat and the bugs,” said McArthur, an undergraduate at the University of Connecticut. “But we got the work done.”

McArthur spent the summer collecting and analyzing data with the Raymond Biogeochemistry Lab, headed by Peter Raymond, a professor of ecosystem ecology at the Yale School of Forestry & Environmental Studies (F&ES). The lab is conducting a large-scale analysis of the Connecticut River watershed to determine how dissolved organic matter (DOM) affects river processes, water quality, and carbon cycling.

For McArthur, a graduate of New Haven’s Hill Regional Career High School, the experience was more than just a crash course in biogeochemistry or a chance to explore the woods of Connecticut. It also set her on a new career path.

She was one of five interns studying STEM-related fields hosted by F&ES this summer through the New Haven Promise program. The internship program, founded in 2011, provides full tuition scholarships to New Haven students at two- and four-year public colleges and universities in Connecticut. The scholarships are funded through a partnership between Yale University and The Community Foundation for Greater New Haven, with the mission to promote investment in education and economic development.

Other interns included: Bryanna Moore, a student at Yale; Kamil Wielechowksi and Joshua Lovett-Graff, students at the University of Connecticut; and Maryana Dumalska, a student at Boston College.

The program primarily serves students of color from lower income households — nearly 90 percent of applicants are either Black or Hispanic, and more than 40 percent are from households with an annual income of less than $30,000. Since its founding, more than 1,500 scholarships have been awarded and more than 200 Promise Scholars have interned in more than 30 departments across Yale.

“These students bring experience from outside environmental studies, finding the interconnectedness between the academic areas they’re passionate about and how it intersects with the environment,” said Sara Smiley Smith, Assistant Dean of Research and Sustainability at F&ES, who has worked with Promise interns for the past two summers.

“This program empowers them to champion the environment in their own ways, while leveraging the knowledge they gain here at F&ES to move on to successful careers.”

McArthur worked for two months with Laura Logozzo, a Ph.D. student in Raymond’s lab. She helped with all levels of fieldwork, which included maintaining measuring instruments in the river, downloading data collected by the instruments, and collecting water samples to return to the Yale laboratory. The samples were then methodically filtered and measured for dissolved organic matter, which can alter the chemical composition and water quality of larger rivers and bodies of water downstream.

A chemistry major, McArthur had limited exposure to aquatic biogeochemistry heading into her internship, she said, but she came to value the practical skills she learned through research.

“I was introduced to other fields of study, and how to use instruments to collect and analyze samples,” said McArthur. “I’m grateful to have learned so much and be introduced to new techniques.”

Her introduction to biogeochemistry has also changed her academic path, McArthur said. With the help of Raymond, she was referred to research professor Ashley Helton in UConn’s Department of Natural Resources and the Environment. McArthur will volunteer as a researcher in Helton’s lab this academic year and join a research project next summer.

“Biogeochemistry encompasses everything I want to do in my career,” she said. “It can be applied to many fields — education, forensics, public health — so I have flexibility when it comes to research.”

And the experience isn’t just beneficial for the students — it’s meaningful to the researchers.

“Mentoring undergraduates is so rewarding – it’s my favorite part of research,” said Logozzo. “These students spend most of their time in classrooms or labs. When they’re out in the field, the work they do is making a real difference.

“Working with students breaks up the monotony of day-to-day research. It re-inspires you and reminds you why you want to do this in the first place.” 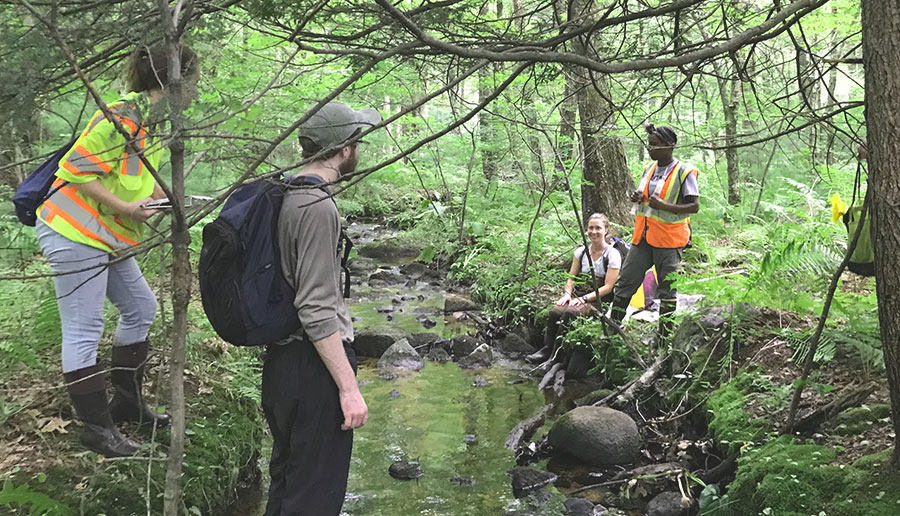