Photo by James Souder
First-year students outside one of the new bunkhouses at Yale Myers Forest during summer MODs in August.
Even before a devastating fire that destroyed the Yale Myers Forest camp, Professor Mark Ashton ’85 M.F., ’90 Ph.D., Director of the Yale School Forests, described the story of the forest as one of “renewal, regrowth, and regeneration.”

As the Yale School of Forestry & Environmental Studies (F&ES) unveils a rebuilt camp and new research center at the forest this semester that is particularly true.

The rebuilt camp, which was used by incoming students during this summer’s annual orientation, or MODs, in addition to a new research facility, will be open for viewing during the School Forests annual Harvest Festival on Sept. 29.

The newly completed buildings pay homage to tradition by maintaining the look and feel of the old camp, with their iconic white clapboard siding, green trim, and green metal roofs. And there’s a field stone fireplace in the common room built largely from stones salvaged from the former structure.

But there are also several improvements to the camp, including a larger kitchen and common meeting space, redesigned bunk quarters, and a new classroom, complete with high speed WIFI. And critically, the rebuilt camp is safer. Buildings are spaced farther apart to reduce the spread of catastrophic fire, and a new alarm system connects the camp to both local fire stations and Yale officials in New Haven. The School Forest also hired a new part time caretaker, a Quiet Corner Initiative partner and neighbor to the forest, to help maintain and monitor the camp. 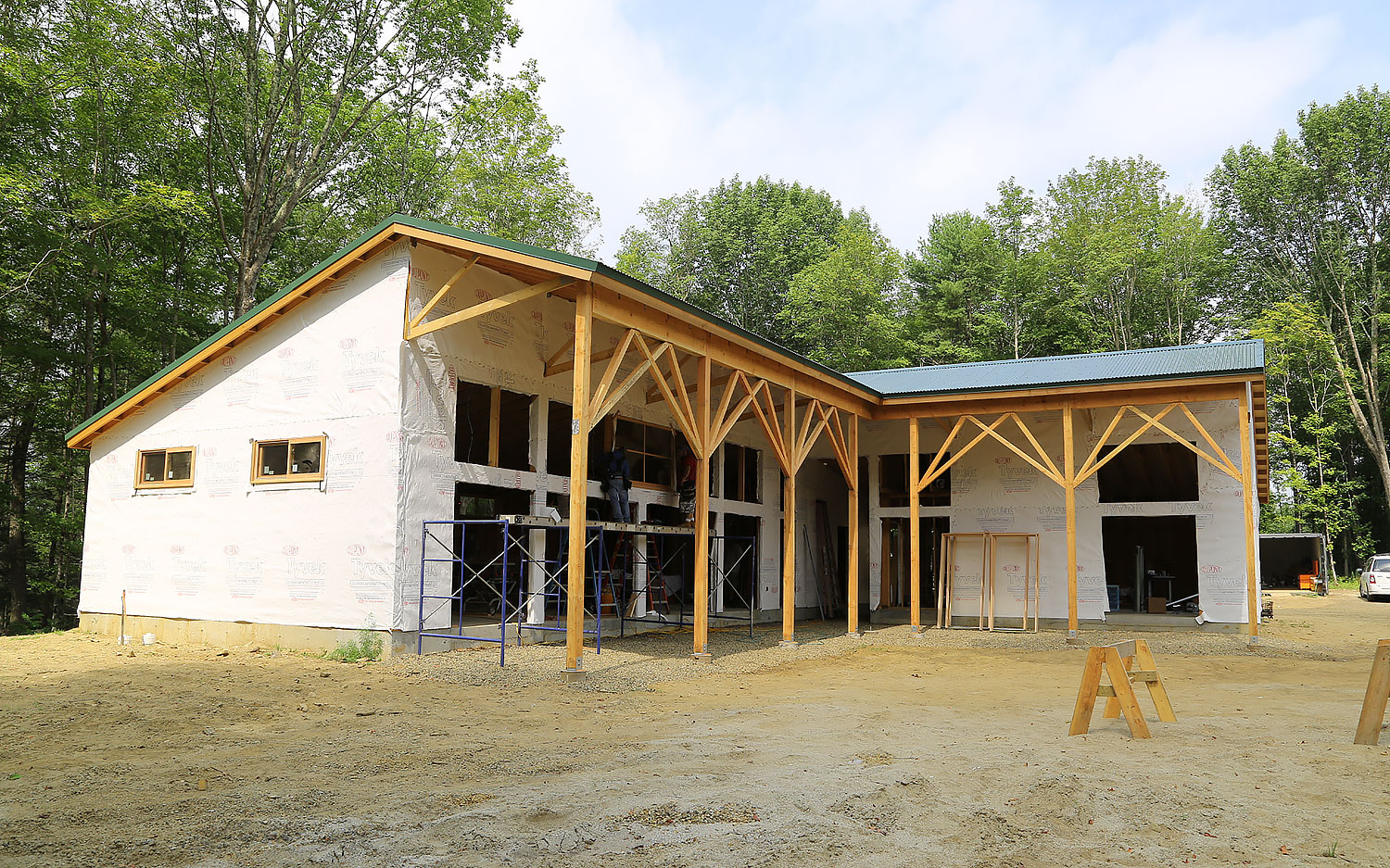 Photo by Matthew Garrett
The new research facility will house a wet laboratory, a herpetarium, soils lab, and a common meeting space with a wood stove.
The camp also features a large, open-air, timber frame auditorium — planned long before the devastating fire and completed last year — funded by the Class of 1980. Much of the wood used for the auditorium’s construction was sourced from within a few miles of the site.

In addition to touring the new buildings at the main camp, visitors will have the opportunity to visit a new research facility located across the road. The space has a contemporary, yet rustic feel, with all the conveniences of a modern research facility. Once complete, the facility will house a wet laboratory, a herpetarium, soils lab, and a common meeting space with a wood stove. The labs will enable student and faculty researchers to process samples on-site rather than having to haul them back to New Haven for analysis. Garage-style doors open to a covered porch and the nearly 8,000-acre forest outside.

All of the new projects will be open to visitors during the School Forests annual Harvest Festival on September 29. Festivities will include apple cider making, honey making, timber sports, a locally sourced dinner, and music from Yale’s Tangled Up in Blue.

While the new facilities will primarily support forestry training, ecological research, and field experiments, Murray says there are opportunities for students to engage in a variety of independent projects at Myers. For example, the solar installation on the old Yale Myers kitchen was a student-led initiative who conducted interviews with area landowners about renewable energy. Murray says, with student interest, they’d like to expand renewable energy programs.

There’s also a half-acre forest orchard located near the camp, part of the nascent Yale Agroforestry Collaborative, which also includes experimental sites at the Yale Farm, Yale Landscape Lab, and Yale Forest Garden. The forest orchard, which was set up for research rather than strictly production, contains a mixture of traditional crops like peaches and cherries growing alongside more experimental ones, such as pawpaws and persimmons, so researchers can study how climate change is affecting growing conditions in southern New England.

Murray says the new developments at Yale Myers Forest will enhance their ability to support student research, education, and professional training. And she encourages all students — regardless of professional interest — to take advantage of the forest while they’re at F&ES.

“It’s a chance to get a sense of how data collection and analysis is conducted within the context of a specific site,” she said, “because no matter what field you’re in, whether you’re strictly in a data-driven science field, or working on policy, writing, land management, or business, it’s important to know how that information is generated, how uncertainties are built into it, and how people try to adjust for that, so you can work with the data to make better decisions.”
Located in the towns of Ashford, Eastford, Union and Woodstock, Conn., Yale Myers Forest is a center for educational programs, research, and demonstration in sustainable forest management. At 7,840 acres, it is the largest of the seven School-own forests and the single largest piece of property used for educational purposes by Yale University.