During a four-year study, funded by the National Science Foundation, researchers will examine whether a collaboration between humans and robots can improve the efficiency and profitability of the world’s threatened recycling sector.
By Kevin Dennehy 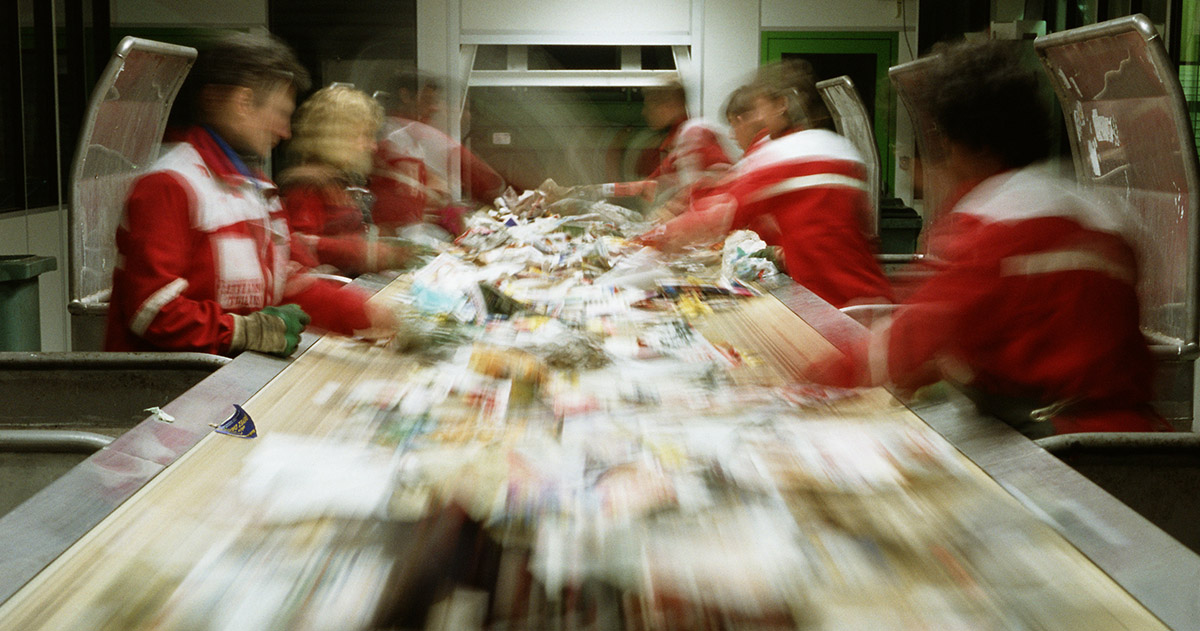 Shutterstock
Workers at a recycling center sort through waste moving down a conveyer belt.
Last year China announced that it would reject almost all recyclables imported from other countries due in part to the amount of “impurities” — or non-recyclable materials — in the waste that then slowed recovery processes and reduced profitability. Now more countries from south and southeast Asia are considering similar bans, a trend that could create enormous stockpiles of waste and imperil the global recycling industry.

During a four-year research project, funded by the National Science Foundation (NSF), an interdisciplinary team of researchers will examine whether a collaboration between humans and robots can improve the quality of these recyclables and the profitability of this vital yet struggling sector. At the same time, they will evaluate opportunities to create new human jobs that complement these automated systems.

The project recently received more than $2.5 million in grants from the NSF’s “Future of Work at the Human-technology Frontier” program, which identifies research that responds to challenges related to the future of jobs and workers amid rapid social and technological changes.
“Automation has historically brought down the costs and increased the quality of numerous manufacturing processes.”
— Aaron Dollar, Yale School of Engineering & Applied Science
“Waste-sorting is the most important problem that we face in the recycling field, because if we don’t do it well the market prices diminish significantly,” said waste expert Marian Chertow, associate professor of industrial environmental management at the Yale School of Forestry & Environmental Studies (F&ES) and a co-principal investigator for the research project.

Researchers hope that robotic automation, including new technologies that might help sort difficult materials before they ever reach human hands, will help improve the efficiency of the process.

“Automation has historically brought down the costs and increased the quality of numerous manufacturing processes,” said Aaron Dollar, a professor of mechanical engineering and materials science at the Yale School of Engineering & Applied Science and Yale’s principal investigator for the research. “We want to see what we can do along those lines in order to help the important but troubled recycling industry.”

A major goal of the effort is not to replace existing workers, but to seek more productive and effective ways of deploying the workforce.

The interdisciplinary project was inspired by the work of Berk Calli, a former postdoctoral fellow at Yale who is now an assistant professor at Worcester Polytechnic Institute (WPI) and the lead principal investigator of the project. His research focuses on how to solve sustainability challenges through complex robotic manipulation.

“Robotics research has made groundbreaking advancements in manufacturing industry, healthcare technology and search and rescue, among many others, but how robots can help us achieve an environmentally sustainable future has been overlooked for the most part,” said Calli. “One goal of my lab is to expand the field of Environmental Robotics. Incorporating robots into recycling facilities is a natural fit.”

The U.S. scrap recycling industry represents about $117 billion in economic activity annually and more than 530,000 jobs. Many of these workers are employed at material recycling facilities (MRFs), where waste is sorted and prepared for end users.

These centers, however, rely heavily on the perception and judgment of workers who are asked to manually sort through piles of waste — including a mix of plastics, paper, metal, glass, and non-recyclables —that travel down conveyer belts. Workers are asked to identify and handle a complex variety of waste under frequently dangerous and difficult conditions, including hazards related to large and heavy items, toxic materials, and loud noises.

Working with MRF operators, the Yale-led research team will explore whether sorting processes can be improved through the integration of new technologies — including advances in object detection, manipulation, and human-robot interaction — that might automatically remove some of these hazards before they reach human sorters.
“The last thing the world needs is a serious threat to recycling because it’s one of the few environmental habits and positive solutions that people have been working on for many years.”
— Marian Chertow, Yale School of Forestry & Environmental Studies
Researchers will also conduct economic analyses to determine better facility configurations that reduce bottlenecks, target materials of high value, and boost the efficiency of the entire process. “We will analyze how the quality requirements for recyclables differ from sector to sector and which recycling streams present the best market opportunities,” said Reck, a senior research scientist and lecturer at F&ES.

At the same time, Wrzesniewski, from the Yale School of Management, will study the relationship between humans and robots in order to improve worker safety, the quality of the jobs, and worker motivation. Wrzesniewski, who studies how people make meaning of their work in difficult contexts, will examine how workers currently employed at these recycling centers understand their roles now and the potential impact of technological changes.

“How the redesign changes their relationships to others in the workplace is another area of interest,” she said. “We plan to conduct interviews and observations initially, which we hope will inform other kinds of data to gather and analyze.”

Chertow, who directs the Program on Solid Waste Policy at Yale, believes the global recycling sector has reached a critical moment.

“Many countries are announcing that they will phase in bans because they basically don’t know what do with all the material — they are just overwhelmed,” she said. “And the last thing the world needs is a serious threat to recycling because it’s one of the few environmental habits and positive solutions that people have been working on for many years.”