On the Front Lines of Justice: Strategies
To Support Embattled Local Activists

Across the world indigenous leaders have been targeted with violence and imprisonment for defending their homes and local resources. In an op-ed, Peter Kostishack ’00 M.E.Sc. describes strategies urgently needed to protect their homes, their freedom, and their ways of life.
By Peter Kostishack

Photo by Peter Kostishack
A year ago this week, the murder of Berta Cáceres, a Honduran river protection activist, attracted international attention. For more than two decades Cáceres, who co-founded and led an organization called the National Council of Popular and Indigenous Organizations of Honduras, fought to protect indigenous homelands from the threat of hydroelectric dams. 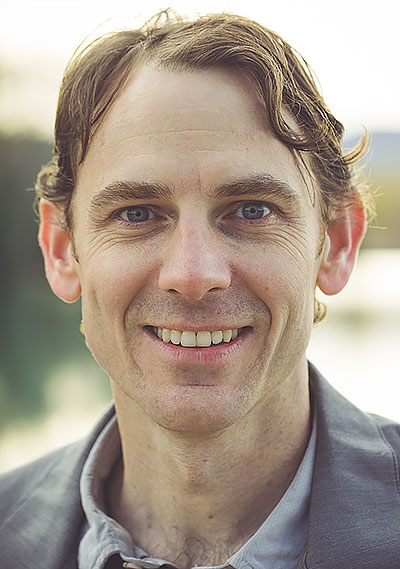 Peter Kostishack ’00 M.E.Sc. is Director of Programs at Global Greengrants Fund, one of the leading funders of environmental and human rights work worldwide. He works directly with local activists, communities, and organizations to support local efforts to defend traditional ways of life and the environment.
Despite threats to her life, her grassroots campaign eventually forced the world’s largest dam developer, Sinohydro, to abandon plans to build a massive dam on the Gualcarque River, a river in western Honduras considered sacred by the indigenous Lenca people. Three years after this victory, she was gunned down in her home.

But her death is just one of many examples in which indigenous leaders have been killed for defending their communities and their local resources. Indigenous people made up more than a third of the 185 environmental defenders killed worldwide in 2015, according to a Global Witness report. In Honduras alone, at least 123 land and environmental activists have been murdered since 2009.

In Chile, another country where indigenous peoples have been targeted for protecting their rights, last April I joined the 4th National March for the Water in the city of Temuco. The aim of the march was to draw attention to the plurality of issues surrounding water, including access to clean water and the impact of large-scale dam projects.

The march — in which I joined indigenous people, students, and environmental groups — helped me focus my work on what can be done to address this problem.


The closing of civil society has taken several different forms worldwide, from South America to Sub-Saharan Africa to Russia. But we have come to recognize common conditions in countries where the greatest criminalization, attacks, and murders of environmentalists are occurring.

The first is states encouraging conflict by granting private corporations and industry the rights to community lands, water, and natural resources. State leaders see this as an opportunity to increase national income through the commercial extraction of raw natural resources, energy production, and the large-scale cultivation of food commodities for export.

The second is the stigmatization and censorship of those who oppose this development. In doing so, the state argues that these groups are keeping their countries trapped in poverty and taking away jobs. They accuse them of being foreign agents — or even terrorists. This characterization gives corporations and other citizens license to threaten, intimidate, and even perpetrate violence against activists. It also creates internal conflict within communities and social movements, causing divisions and fear.
“Those individuals protecting their rights and the environment are portrayed as opponents not only of the companies that have invaded their lands, but also of their own governments — even the general public.”
A third condition, which is connected to the first two, is the formal establishment of laws and policies that restrict rights, usually on the grounds of preventing terrorism and protecting national economic interests. While these laws can take many forms, the most common include tightening fiscal control of civil society organizations, restricting funding, censoring speech, criminalizing protest, banning assembly, and revoking the registration of critical organizations.

All of these factors can be crippling, creating distrust of civil society and fear within organizations and communities. Those protecting their rights and the environment are portrayed as opponents not only of the companies that have invaded their lands, but also of their own governments — even the general public. Criminalization and violence become common, and perpetrators — whether they are state or private actors — can abuse rights with impunity.

Communities and grassroots organizations generally have very rudimentary systems for protection and thus often turn their attention away from their struggle for their environment to focus on immediate survival. Even if they stick wth the fight, human and financial resources become stretched too thin as groups try to communicate and travel safely, document abuses, and defend criminalized leaders in court.

The majority of organizations are unfamiliar with international resources and mechanisms for protection, unsure how to access them and how they can help. Many activists fear most of all for their families, which frequently become targets. And they must find means of survival if a family leader is imprisoned or killed.

Up ahead, the indigenous and environmental activists leading the march gathered in a circle in the middle of an intersection for an impromptu discussion. Once we started moving again, we took a sharp turn up a side street on a prohibited route, leading our colorful group to the regional prison where we stopped again.

Outside the prison, we expressed solidarity with the indigenous Mapuche prisoners inside, watching and waving from a small window above the high walls and razor wire. 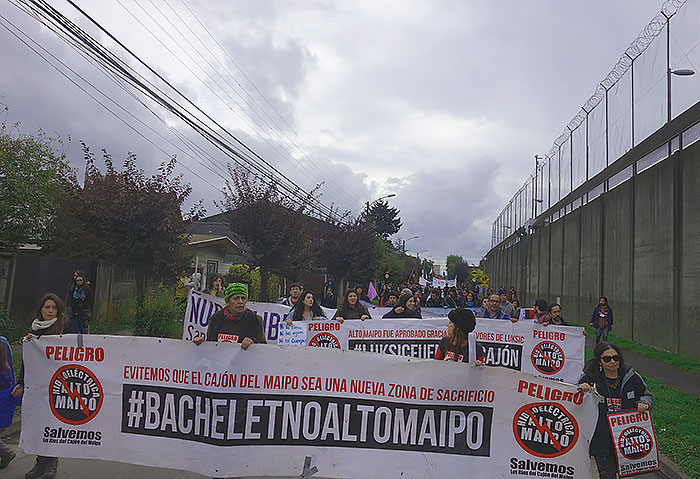 Protesters march past a prison where other activists have been imprisoned.
The prisoners included many of the Mapuche facing lengthy prison times for terrorism under a law developed during the Pinochet dictatorship. Now used mostly against the Mapuche people in conflict with the state over their rights to their traditional territories, the anti-terrorism law has justified the militarization of communities, arrests, and trials of Mapuche hinging on the testimony of anonymous, masked witnesses.

The Mapuche have endured a long history of the government handing their lands over to the commercial forestry and mining industries and selling the rights to their sacred rivers to hydropower companies. Criminalization is the latest of a string of human rights abuses that began with the dispossession of territory.
The arrest and trial of Mapuche activists in Chile under antiterrorism laws is part of a broader trend of the closing of civil society space in countries around the world from places where we have come to expect it like Russia, China, and Egypt to others like Sub-Saharan Africa and Central and North America.

In 2013, Ben Emmerson, a UN Special Rapporteur on human rights and counter-terrorism, urged the Chilean government to stop using the anti-terrorism law against the Mapuche on the grounds that it was discriminatory. However the law continues to be employed to suppress them and their claims to their environment and territorial rights.


For more than 20 years, Global Greengrants Fund has funded grassroots organizations and communities working on the front lines to protect the environment and advance rights to lands, forests, water, and natural resources.

From the start, Global Greengrants’ small grants have often been made under the radar. Many have been awarded to groups that have not been formally registered and have supported those advocating positions counter to those of government or powerful corporate interests.

Working with these local activists and organizations, we have developed a combination of strategies that help protect civil society space and ensure the safety and security of those defending their rights.

A central strategy is strengthening local organizations so they have the preparation, networks, and structures that offer resilience and the ability to respond quickly and defend themselves against threats and criminalization. Organizations that are connected to other groups, are able to illustrate transparent decision-making, and are composed of multiple leaders answerable to the public are less vulnerable to attack. They are also better able to control the actions of their own members in demonstrations and conflicts — and better able to respond to threats. Organizations can further strengthen themselves by developing security plans and incorporating safety precautions in all aspects of their work.
“Strategies must also put pressure on corporate actors and investors — often international — who profit from human rights abuses that occur as they gain access to resources in the territories of local people.”
Also important is the ability to respond to human rights emergencies at a meaningful scale — and to make that capacity known and accessible to smaller, less networked organizations and communities. The demand for fast, flexible, and discreet response funding to help people in danger far exceeds the available resources. For most front-line communities, access to rapid legal and media support when threatened or criminalized is often lacking. So, too, is protective accompaniment by trained volunteers who can be an effective deterrent against violence, especially when the state-provided protection is absent, untrusted, or compromised.

Meanwhile, there is also a need to engage political strategies that challenge the root causes of violence and criminalization. This is long-term work that combines uncovering and denouncing publicly the institutions and actors that violate human rights and pressuring legal systems to hold the perpetrators of violence accountable. This work also includes challenging policies that place communities at the center of conflict by taking away their rights to resources. And it must create a public debate about the human and environmental costs of development in which the defenders of human and environmental rights can be seen in a positive light.

Strategies must also put pressure on corporate actors and investors — often international — who profit from human rights abuses that occur as they gain access to resources in the territories of local people.
As an organization that supports social change, Global Greengrants Fund always seeks to reach the root causes of conflict, abuse, and environmental degradation. The growing violent backlash against the grassroots activists who we support, and the violation of their rights to speak out and protect their livelihoods, has the same root as much of the environmental destruction we work to prevent. The erroneous belief that greater good can come from taking resources away from communities and granting them to outside corporate actors is driving violence against people and the planet. It’s a tragedy we all have an obligation to stop.
Peter Kostishack ’00 M.E.Sc. is Director of Programs for Global Greengrants Fund. He can be reached at Peter@Greengrants.org. 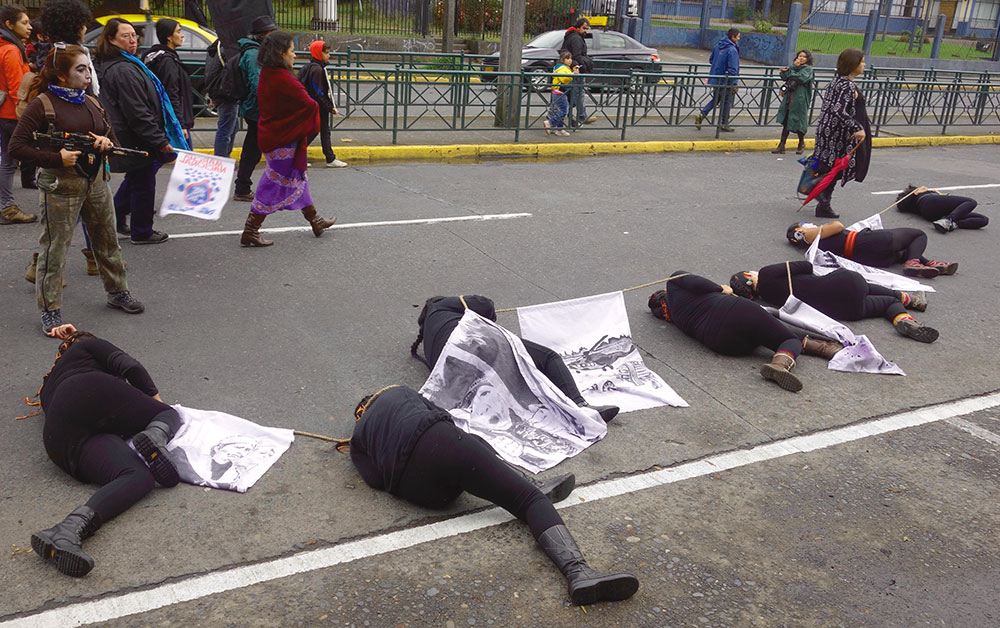