Over the past four decades, Jerry Melillo '72 M.F.S., '77 Ph.D., has established himself as one of the world's preeminent scientists, expanding our understanding of the how terrestrial ecosystems respond to climate change. Now, the real challenge, he says, is for scientists to make their research understandable and useful to decision makers. This weekend, Melillo will be honored with a Distinguished Alumnus Award at the annual F&ES Reunion.
By Timothy Brown
More than a quarter century ago, Jerry Melillo ’72 M.F.S., ’77 Ph.D., began a soil warming experiment in a deciduous forest stand at Harvard University’s Long Term Ecological Research (LTER) site in central Massachusetts. This ongoing field experiment is designed to expand our understanding of some of the key biogeochemical responses of forests to a warming world. The project, which measures microbial and plant responses to a chronic 5-degree-C warming of the soil, has engaged dozens of students and faculty from across the country and generated research articles in several of the leading scientific journals, including an upcoming article in Science that documents key findings from the past 26 years.

Melillo, a Distinguished Scientist and Director Emeritus at The Ecosystems Center of the Marine Biological Laboratory (MBL) in Woods Hole, Massachusetts, will be honored with a Distinguished Alumnus Award from the Yale School of Forestry & Environmental Studies (F&ES) at this year’s Reunion Weekend, October 6-8. On Saturday morning, Oct. 7, he will present a talk in Kroon Hall titled “Using Land to Mitigate Climate Change: Setting Targets, Recognizing Tradeoffs.” 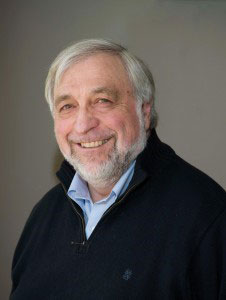 Jerry Melillo '72 M.F.S., '77 Ph.D.
Melillo says his inspiration for the soil warming experiment came from the Hubbard Brook Experimental Forest, another LTER site, where he conducted doctoral research under Professors Herb Bormann and Garth Voigt. He credits Bormann, Voigt, and other F&ES faculty, including George Furnival, Bill Smith, Tom Siccama, and George Woodwell, with teaching him the importance of a systems view in understanding the complexity of the environment. He says F&ES also taught him that ecosystem science is a team endeavor.

“I was in a particularly exciting cohort of graduate students,” he said during a recent interview. “A number of us were working on research projects at Hubbard Brook, so we were able to learn a lot from each other and generally have a spectacular time. My fellow students, together with an exceptional faculty, made my time at the School a “golden period” in my education.”

After earning his Ph.D., he was recruited to work at Woods Hole by Woodwell, an early proponent of global change research. Woodwell was in the process of establishing The Ecosystems Center, focusing on large-scale problems of the environment, including human disruption of the carbon cycle and its implications for climate change. Melillo initially thought he’d seek a university position after spending a couple of years at the Center, but he loved the work and thrived on interactions with his fellow researchers. “I couldn’t imagine being in a more exciting research environment than Woods Hole to deal with the problems I was interested in,” he said.

Melillo, who now also holds an appointment as Professor of Ecology and Evolutionary Biology at Brown University, is broadly interested in the impacts of human activities on terrestrial ecosystems. His pioneering research includes field studies at sites from the Brazilian Amazon to the Swedish Arctic, and simulation modeling at the global scale. In the 1990’s, he helped design the Terrestrial Ecosystems Model (TEM), a first of its kind model used to predict the long-term terrestrial impacts of global climate change. He has published more than 300 peer-reviewed articles, two ecology textbooks, and three edited volumes on biogeochemistry, and is an elected member of the National Academy of Sciences, the American Academy of Arts and Sciences, and the American Philosophical Society. He also served as lead author of the earliest reports of the Intergovernmental Panel on Climate Change (IPCC), for which he was co-recipient, with more than 100 of his colleagues, of the 2007 Nobel Peace Prize. In the mid-1990s, Melillo served as the Associate Director for Environment, Office of Science and Technology Policy, in the Office of the President. He continued to act on his interest in the intersection of science and policy as he co-led the first three National Climate Assessments for the U.S. Global Change Research Program (2000, 2009 and 2014).
“The real challenge for scientists now is to make the science as usable as we possibly can.”
— Jerry Melillo
Melillo currently serves as board chair of the National Academies’ Gulf Research Program, a $500 million program established as part of the Deepwater Horizon settlement, the largest offshore oil spill in U.S. history. The program supports research to promote oil and gas safety and resilience of the environment and human communities in the Gulf of Mexico region. “The Gulf region is a complex system — a mix of marine, estuarine and land ecosystems — that is under multiple stresses, including the unintended consequences oil and gas exploration and extraction, sea level rise, extreme weather, and oxygen depleted coastal waters driven by nitrogen pollution from the Mississippi Basin,” he said. The Gulf Research Program is fascinating to work on, he says, because it challenges him to be a systems thinker. “It’s that basic systems interest that I gained while studying at Yale that has intrigued me about this particular activity.”

While most scientists now agree that human activity is the primary driver of climate change over the past century, Melillo says we need more research to improve attribution and our ability to downscale climate data at the city, state, and regional levels. He’s particularly interested in the feedbacks to the climate system from terrestrial ecosystems, an interest that was the impetus for his soil warming experiments at Harvard Forest. While he enjoys research, he is also committed to the clear communication of science to legislators, planners, resource managers and others who are earnestly working to make informed management decisions for the benefit of society. “The real challenge for scientists now is to try to make the science as usable as we possibly can. That’s one of the reasons I got involved in both the IPCC and the National Climate Assessment activities over the last couple of decades,” he said. “I wanted to work on that translation of science for decision makers and to carry on a dialogue with them that informs the kind of science we might do to meet their needs.”

“I think F&ES has an important role to play in educating individuals who can effectively work at the science-policy interface. People with this “bridging skill” are essential for building a sustainable future for the world in the face of the grand challenges of our time, including the challenge of climate change,” he said.

Despite the daunting threat of climate change, Melillo says he’s hopeful about the future. “We know a lot about the climate system; certainly enough to take action to limit the amount of climate change and the extent of damaging impacts. I am particularly encouraged by the shift in climate discussions towards solutions.”