For nearly two decades, conservationists Lilian Painter and Robert Wallace have worked with indigenous communities in Bolivia’s Madidi-Tambopata landscape to recover endangered species and improve livelihoods for the people who live there. Despite the challenges, their strategy is working.
By Timothy Brown
You probably wouldn’t expect for the name Gucci to come up in a conversation about landscape conservation in South America. But during a recent interview, Lilian Painter, Bolivia Program Director at the Wildlife Conservation Society (WCS) and the Dorothy S. McCluskey Fellow at the Yale School of Forestry & Environmental Studies (F&ES), mentioned the luxury fashion designer while describing efforts to improve livelihoods for the Tacana, an indigenous group living in northwestern Bolivia. 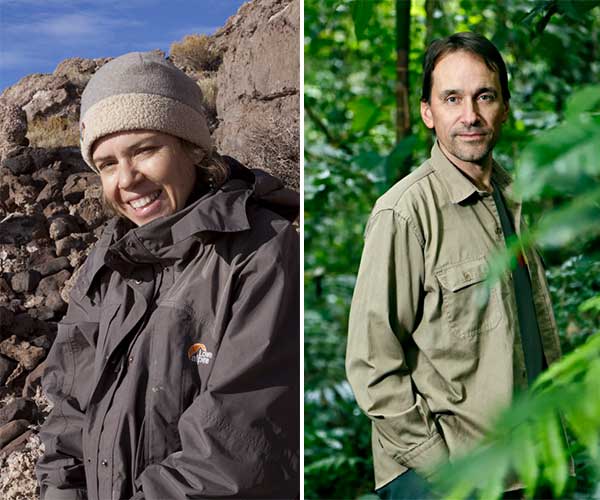 Lilian Painter, left, and Robert Wallace
For nearly two decades, the WCS has partnered with the Tacana to help strengthen their territorial rights and enhance indigenous management capacity. Thanks to their efforts and Gucci’s commitment to product sustainability and traceability, Tacana hunters now earn five times more for their caiman skins, which has helped reduce caiman poaching and illegal trade.

Painter will share insights from her decades of conservation experience in a talk entitled “Beyond Landscapes to National, Regional, and Global Stages” at noon on Thursday, April 13 in Burke Auditorium. The talk is free and open to the public.

For the past 17 years, Painter, along with her husband, Robert Wallace, Director of the Greater Madidi-Tambopata Landscape Conservation Program at WCS and Bass Fellow at F&ES, has worked in the Madidi-Tambopata landscape, an area spanning 110,000 square kilometers in northwestern Bolivia and southeastern Peru.The landscape encompasses both Amazonian rainforest and Andean mountains, with elevation rising from 180 to 6,000 meters above sea level. It’s a wild place, filled with some 12,000 species of plants, 1,100 species of birds (11 percent of the world’s total) and 300 species of mammals. At the heart of the landscape is Madidi National Park. Established in 1995 by the Bolivian government with support from WCS, Painter and Wallace were hired to develop conservation programs in the new park.

“The landscape is so diverse and was virtually undocumented when we first arrived,” Wallace said. “A lot of what we’ve done over the years is gradually chip away at describing what biodiversity is there.”

The different indigenous groups that inhabit that Madidi-Tambopata each have their own language, culture, and set of values. Painter and Wallace have long partnered with the Tacana, one of the earliest missionized — and acculturated — indigenous groups in Bolivia. Today, many Tacana have lost their language, and only about one-fifth of the people speak it. But they maintain other strong cultural ties to nature and they have been able to proactively enter into negotiations over lands and governance. In contrast, their neighbors, the Tsimane, have retained their traditional culture and language (most Tsimane women do not speak Spanish). Other indigenous groups in the landscape are geographically isolated, and one group lives in voluntary isolation from the outside world. From the beginning, the WCS had an approach wherein each technical person would work in tandem with an indigenous counterpart.

“Part of the strength of it was that because the tools were developed in partnership with an indigenous organization, they assumed ownership over those tools and made them locally relevant,” Wallace said.

Painter and Wallace are research scientists by training and have published in numerous scientific journals, but their hearts are in conservation. They use the best available science to help inform forest management and wildlife recovery projects, but much of their work is cultural — improving livelihoods and governance systems, and enhancing management capacity for local peoples.
This spring, the team is co-teaching a course at F&ES called “A Practitioner’s Guide to Landscape Conservation” in which they share lessons learned in the field with a focus on interdisciplinary collaboration.   “It’s a long-term commitment that our institution has made to that place, and that we have made,” said Wallace. “We wanted to share some of the lessons we’ve learned along the way.”

“The students here are active learners. They question; they find the potential — or real — weaknesses, and make you think about that,” said Painter. “It’s a very healthy exchange.”

The pair insists that landscape-scale conservation helps preserve important ecological functions and habitat required by most threatened species. It also the scale at which most threats — such as expanding road networks, widening energy infrastructure, and intensive soy and meat production — occur.

“The question is: How do you build into a landscape sufficient connectivity such that overall the landscape retains the most critical ecosystem functions and stronghold populations of things like jaguars, Andean bears, Andean condors, marsh deer, maned wolves, giant otter — just some of the species that we at WCS have done research and monitoring on?” Wallace said.

Over the last three years, the team has become more aggressive in their communications campaigns. Last year, they collaborated with three students from Yale’s Environmental Protection Clinic who traveled to Bolivia to research public perceptions of protected areas and help develop communications campaigns in Bolivian cities.
“The question is: How do you build into a landscape sufficient connectivity such that overall the landscape retains the most critical ecosystem functions and stronghold populations?”
— Robert Wallace, Bass Fellow at F&ES
“There’s a lot on TV, but it all seems to be from other places. Bolivian urban people can talk about elephants, polar bears, and tigers, but they don’t know they have maned wolves or giant otters,” Wallace said. “When you talk about Bolivian biodiversity — frogs, reptiles — people don’t know. We have to change that, because that’s how Bolivian society will further value their protected areas and natural heritage of the country.”

Despite the challenges, Wallace and Painter point to compelling evidence that their overall strategy is working. For example, the WCS has provided technical and legal assistance for land use planning for 700,000 hectares of indigenous territories; the deforestation rate in the Tacana indigenous territory is four times lower than similar indigenous territories that lack management plans. Threatened wildlife populations such as white-lipped peccaries, tapirs, and jaguars are rebounding within Madidi National Park. And indigenous people are developing more sustainable livelihoods through partnerships with companies like Gucci.

Painter and Wallace insist that their landscape-scale model is applicable to conservation challenges in other areas, especially throughout the Amazon, which has low-population density and where over 50 percent of protected areas abut indigenous lands.

“I think the general principles of how to engage with local rights and territorial visions is relevant anywhere you work,” Painter said. “Reaching a consensus regarding management of a given area in the long term is always necessary. There’s still space to find win-win compromises.”