The American Association for the Advancement of Science (AAAS) has elected Peter Raymond and Karen Seto, two faculty members of the Yale School of Forestry & Environmental Studies, as AAAS fellows in recognition of their contributions to science.

Raymond, a professor of ecosystem ecology, studies the biogeochemistry of natural systems, particularly the carbon and nitrogen cycles within aquatic systems. He was one of only 10 selected in the Section on Atmospheric and Hydrospheric Sciences. 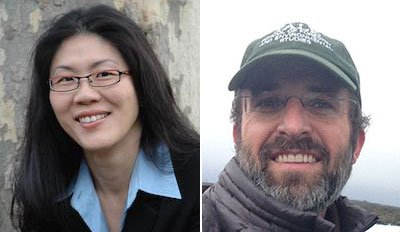 Karen Seto, left, and Peter Raymond
“Professor Raymond’s accomplishments include outstanding research contributions to our understanding of biogeochemistry and particularly to conceptual and empirical studies in both aquatic and marine ecosystems,” his nomination read.

“Additionally, Professor Raymond has contributed his time in the service of science as well as in training the next generation of doctoral level scientists… Professor Raymond has emerged as one of the big-picture thinkers in riverine, estuarine and ocean biogeochemistry and furthermore he is training his postdoctoral fellows and doctoral students to think similarly about biogeochemistry.”

Seto, the Frederick C. Hixon Professor of Geography and Urbanization Science, studies the human transformation of land and the links between urbanization, global change, and sustainability. Earlier this year she was elected a member of the distinguished National Academy of Sciences.

“Her work has redefined how we estimate urbanization using remotely sensed information,” her nomination read. “She has linked the development of new methods with incisive, well defined questions about both causes of urbanization as well as its consequences.

“Collectively, her work is bringing changes to the Earth’s surface into sharper focus. Her findings are seen as critical to understanding the ways that climate and human population will interact in the decades to come.”

The new AAAS Fellows will be recognized on Feb. 17, 2018 during a Fellows Forum at the association’s annual meeting in Austin, Texas.

“This is such a great honor for Karen and Pete, two accomplished scientists who are doing novel research to better understand our changing planet,” said F&ES Dean Indy Burke, who was elected as an AAAS fellow in 2010. “Their important scholarship — including on climate change, urbanization, river and ocean biogeochemistry, and the use of environmental data — also happen to strengthen issues at the core of our own school’s mission.

“They raise our stature ever higher by virtue of their excellent work.”

The AAAS Fellowship dates back to 1874 and has included some of the nation’s most esteemed scientists, including inventor Thomas Edison, anthropologist Margaret Mead, and biologist James Watson.

Also elected this year was Hui Cao, a professor of applied physics and physics in the Yale Department of Physics.