There have been many studies that looked at the effects of hydraulic fracturing, or fracking, on drinking water. Usually, the studies required researchers to knock on the homes of people who lived near active wells and ask permission to test water from their faucets. Over and over.

A few years ago Erica Barth-Naftilan and colleagues took a different approach. The research team from the Yale School of Forestry & Environmental Studies (F&ES) negotiated with a gas company to allow researchers access to gas well pads and the schedule for drilling across a 25-square-kilometer area. 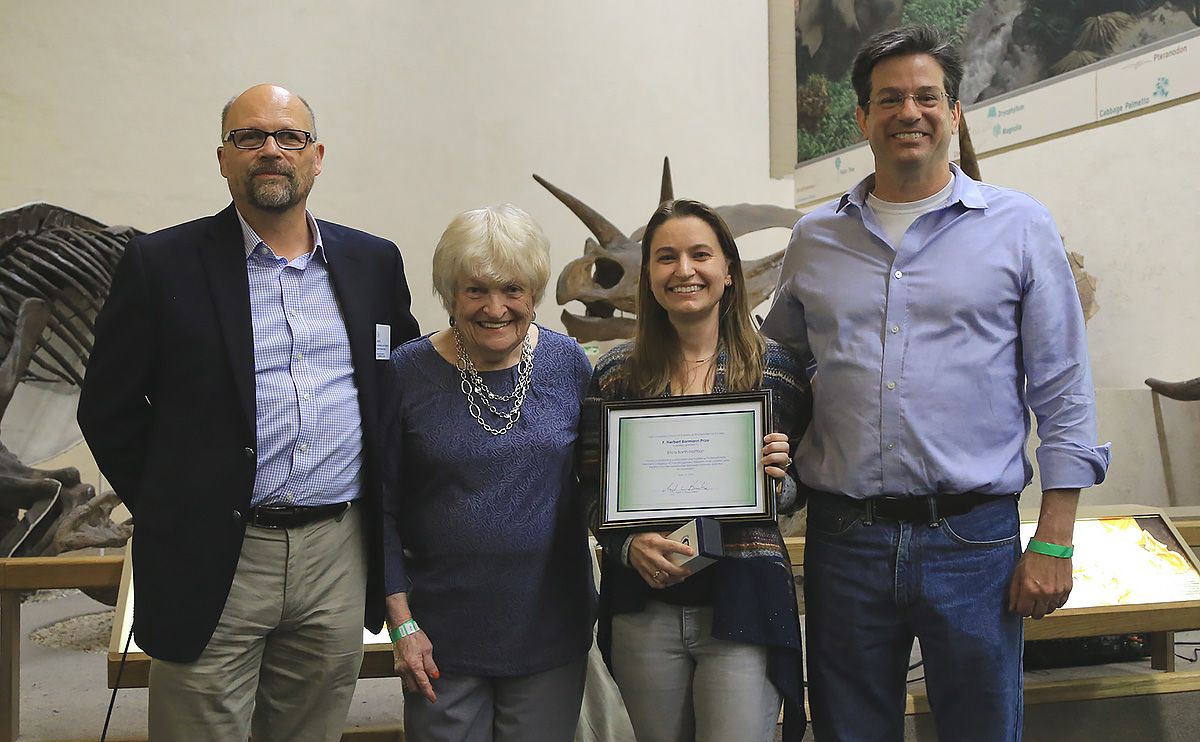 Photo by Matthew Garrett
Oswald Schmitz, left, Chris Bormann, Erica Barth-Naftila, and James Saiers.
Given that rare access, she and her team were able to collect water samples monthly before, during, and after drilling operations in the Marcellus Shale. Last year, they published their results in the Proceedings of the National Academy of Sciences.

The Pennsylvania study — which ultimately concluded that methane concentrations in deep groundwater vary over time and that these variations are likely unrelated to shale gas development — exemplified the spirit of Bormann, said Oswald Schmitz, Oastler Professor of Population and Community Ecology at F&ES and Senior Associate Dean of Research.

Like Bormann’s work that helped reveal the dangers of acid rain and illustrated the effects of clear-cut logging on watershed scale forest ecosystems, he said, this research addressed important environmental issues that affect human populations across large landscapes.

“The study is exemplary in that it soberly addresses an issue that is fraught with political controversy, in which there is willingness and tendency by environmental advocates to lay blame on the oil and gas exploration,” Schmitz said. “The research shows that the evidence does not align with the conventional environmental narrative.”

Co-authors of the paper were James Saiers, Clifton R. Musser Professor of Hydrology at F&ES and Jaeeun Sohng, a research scientist at F&ES.

The formal agreement with Southwestern Energy allowed them access to land near the fracking wells and information on when new wells would be drilled and hydraulically fractured. This enabled the researchers to evaluate the quality of groundwater before, during, and after the installation of these gas wells — and in locations of their choosing.

And while Southwestern Energy received an advance copy of the study’s findings, the formal agreement assured researchers ownership of the data, independence to interpret findings autonomously, and no restrictions on publication.

The findings suggest that variability in concentration of naturally occurring methane is likely greater than believed, particularly in valley settings where saline groundwater systems interact — through natural cracks in the deep rock — with local freshwater systems, said Barth-Naftilan.

And while they found that water pressure close to shale gas wells dropped abruptly within hours of the start of drilling, the pressure increased back to pre-drilling levels as quickly as it declined.

“This was an exciting study to work on because it hadn’t been done before — mostly because finding companies willing to let independent researchers monitor groundwater next to their activities is a difficult endeavor,” said Barth-Naftilan.

“It’s an honor to win this award and be part of Professor Bormann’s legacy, which showcases the importance of field work in understanding our environment,” she said.

Bormann, who taught at F&ES from 1966 until 1992, was a plant ecologist whose research first called the world’s attention to the threat of acid rain in the 1970s. During his career, his research helped scientists better understand the complex but irrefutable relationship between humans and the environment.
– Kevin Dennehy    kevin.dennehy@yale.edu    203 436-4842