Respite from the Urban Heat Island?
Study Eyes Costs of Irrigation as Remedy

A new Yale study will examine whether irrigation of green spaces to mitigate the urban heat island effect in some of the world’s driest cities will be worth the cost — namely, drawing down precious and increasingly diminished water resources.
By Kevin Dennehy 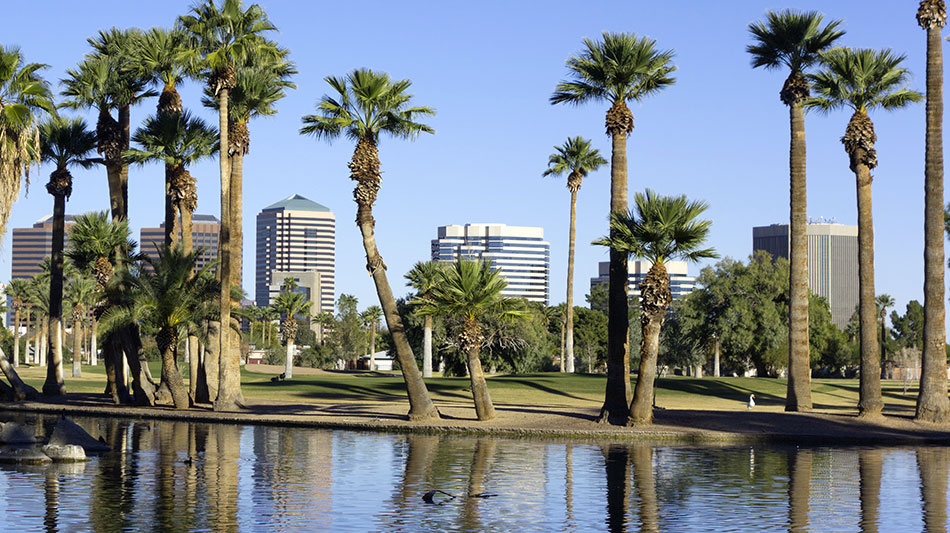 In many metropolitan areas the “urban heat island effect (UHI),” a phenomenon in which urban areas are significantly warmer than the surrounding countryside, is inducing local climate effects that compound the global effects of greenhouse gas emissions. In many places this combination is expected to exacerbate public health risks and drive up energy consumption in what becomes a dangerous feedback loop.

One of the more promising strategies to mitigate these impacts is the expansion of urban green spaces, such as city parks, which through the natural process of transpiration help to cool local temperatures — as much as 1.3 to 1.6 degrees C according to previous studies.

There’s a catch, however; nourishing these green spaces requires precious water resources that many growing cities simply can’t spare.
“There is a tradeoff in mitigating the urban heat island effect and conserving water. Do you want to use that water to reduce those impacts or save it for other purposes?”
— Kangning Huang
A new Yale study will examine this delicate relationship between cooling and water consumption in some of the world’s drier cities, from Phoenix to Cairo. The outcome, researchers say, could help inform municipalities as they make difficult choices in the face of climate change and surging population growth.

Led by Kangning Huang, a doctoral student at the Yale School of Forestry & Environmental Studies (F&ES), the study will evaluate the potential outcomes of irrigating green spaces in six cities worldwide. The project was recently awarded a grant from NASA. (The grant, which is worth $40,250 annually, can be renewed for up to three years.)

“There is a tradeoff in mitigating the urban heat island effect and conserving water,” said Huang. “Do you want to use that water to reduce those impacts or save it for other purposes?”

There are many factors that enhance the urban heat island effect in cities, including the often staggering number of human-created heat sources, the tall and densely configured buildings that can affect heat radiation and air movement, and a preponderance of impermeable surfaces — of buildings, parking lots, roads — made of materials with higher heat capacity.

While the impacts of these attributes will only grow as urban populations increase, other factors can be managed through the addition of green roofs and the irrigation of green spaces.

When it comes to irrigating green spaces, Huang says, it will only be worthwhile if the benefits outweigh the costs — namely, if municipal water resources are used sustainably. This will become increasingly challenging. Already more than 150 million people in urban settings worldwide live under water stress; According to a 2011 study, that number is expected to reach 1 billion by midcentury.

Figuring out the tradeoff, Huang said, requires an understanding of the relationship between cooling and water consumption. “For some reason,” he said, “there remains a limited understanding of how much water is required to achieve the level of cooling you would want in a city.”

In drier places it can be difficult to sustain those green spaces, which are typically populated by non-native plant and tree species that are unable to sustain themselves.

For the study, he will use regional climate models to simulate the urban heat island effect in six arid or semi-arid cities located on six different continents — Phoenix in North America; Lima in South America; Cairo in Africa; Madrid in Europe; New Delhi in Asia; and Adelaide in Australia.

Then, using data from a variety of satellite-based technologies, Huang will alter the soil-water moisture levels on a daily basis to mimic the irrigation process. (He will also run a separate model, based on another satellite-based product, the MODIS-based land surface temperature, to verify the accuracy of the modeling.) Ultimately, he plans to simulate irrigation uses that push regional water supplies up to the point of “water stress” levels, which is the maximum amount of water a city can afford to use in irrigating urban green spaces.

The study will yield maps of urban surface structures and irrigation water usage, as well as the water-UHI relationship.

Huang hopes the results will yield insights that can be used by municipal planners as they consider strategies to limit the expected impacts of climate change in large urban communities. “Municipal governments have some power and control over the irrigation practices in cities,” he said. “I think my results can help them better utilize that power to achieve a better outcome.”

“Many cities around the world are grappling with how to mitigate the urban heat island effect,” said Karen C. Seto, the Frederick C. Hixon Professor of Geography and Urbanization at F&ES and Huang’s advisor. “How can water-based mitigation strategies help and do their effectiveness vary with geography?  Kangning’s research will provide the scientific basis of the relationship between water usage and mitigation of the UHI.”