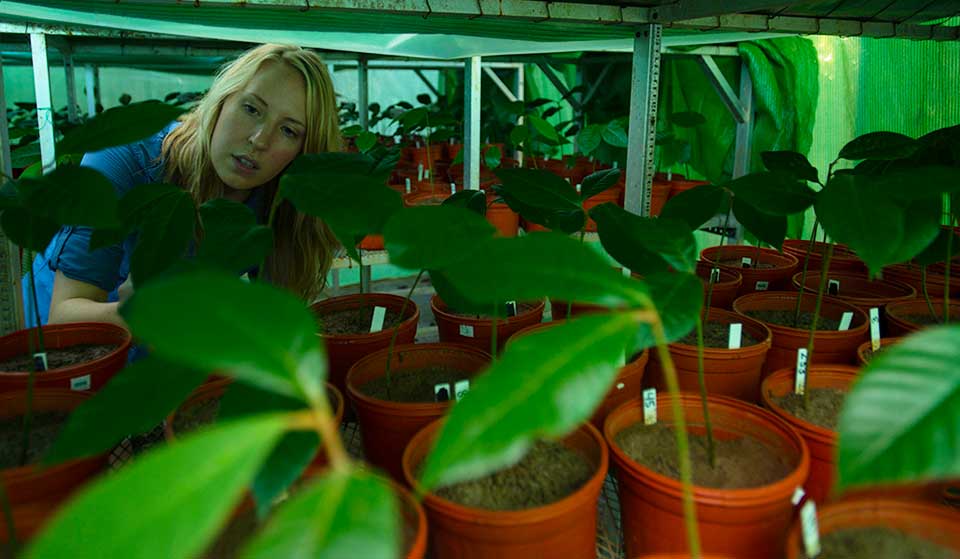 Sean Mattson
Jenalle Eck, a former visiting doctoral student at F&ES, conducted a shadehouse experiment, potting more than 200 tree seedlings collected from a diverse tropical forest in Panama in soil from both the seedlings' maternal tree and other trees of the same species.
It’s widely accepted within agriculture that maintaining genetic diversity is important. In areas where crop plants are more diverse, pathogens might kill some plants but are less likely to wipe out an entire crop.

Few studies, however, have focused on such highly specialized pathogens in natural plant communities. In diverse plant communities, pathogens are thought to maintain diversity by killing common species, making room for rare ones. But what happens to diversity if, like in agriculture, pathogens harm some plants within a species, but not all?
“We often think of pathogens as pests, but we’re finding that they play a key role in a highly diverse ecosystem.”
— Jenalle Eck, postdoctoral researcher at the University of Zurich and a former visiting doctoral student at F&ES
A Yale-led research team has found that tree seedlings grew less effectively in soil located below their mother tree than in soil found under a different individual of the same species. After ruling out other potential drivers, they concluded that the differences in growth were most likely due to microbial pathogens that specialize at the genotype level. Theoretical models revealed that such highly specialized pathogens could help maintain diversity in tree communities and promote increased seed dispersal over evolutionary timescales.

“We often think of pathogens as pests,” said Jenalle Eck, a postdoctoral researcher at the University of Zurich and a former visiting doctoral student at the Yale School of Forestry & Environmental Studies (F&ES), “but we’re finding that they play a key role in a highly diverse ecosystem.”

The study was published in the Proceedings of the National Academy of Sciences. The senior author of the paper was Liza Comita, an assistant professor of tropical forest ecology at F&ES.

For the study, Eck conducted a shadehouse experiment, potting more than 200 seedlings of the tropical tree Virola surinamensis grown from seeds collected in a diverse tropical forest in Panama. The soil for the pots was sourced from either the seedlings’ maternal tree or other trees of the same species.

The researchers showed that the difference in performance between seedlings growing in “maternal” soil and “non-maternal” soil was not the result of variations in soil nutrients or beneficial symbiotic relationships with fungi, thanks to lab work conducted at Yale by Camille Delavaux ’16 M.E.Sc., currently a doctoral student at the University of Kansas.
“These results suggest that highly specialized pathogens are potentially an important, but largely overlooked driver of plant population and community dynamics”
— Liza Comita, Assistant Professor of Tropical Forest Ecology
Using computer simulation models designed by Simon Stump, a postdoctoral associate at F&ES, the team then found that these pathogens can promote species coexistence and can lead to increased seed dispersal, which creates landscapes that allow pathogens to more effectively promote diversity.

“These results suggest that highly specialized pathogens are potentially an important, but largely overlooked driver of plant population and community dynamics,” said Comita. “Our findings underscore the importance of conserving both species and genetic diversity in tropical forests.”

This study was funded by a grant from the National Science Foundation.