At the 3rd Yale Symposium on Chinese Overseas Investment Impacts, a diverse range of speakers, from academic scholars to policy practicioners, sparked a dialogue about the challenges and opportunities behind “greening” China’s landmark Belt and Road Initiative.
In 2013, Chinese President Xi Jinping introduced his signature foreign policy program: the Belt and Road Initiative (BRI), a nearly $1 trillion investment in infrastructure projects across Eurasia, Africa, and Latin America.

Positive reaction to the initiative has focused on the diplomatic benefits of connecting various regions and providing new avenues for infrastructure improvements in developing nations. According to The New York Times Magazine, at least 68 countries have approved projects partly funded by Chinese banks and investors since the initiative began. 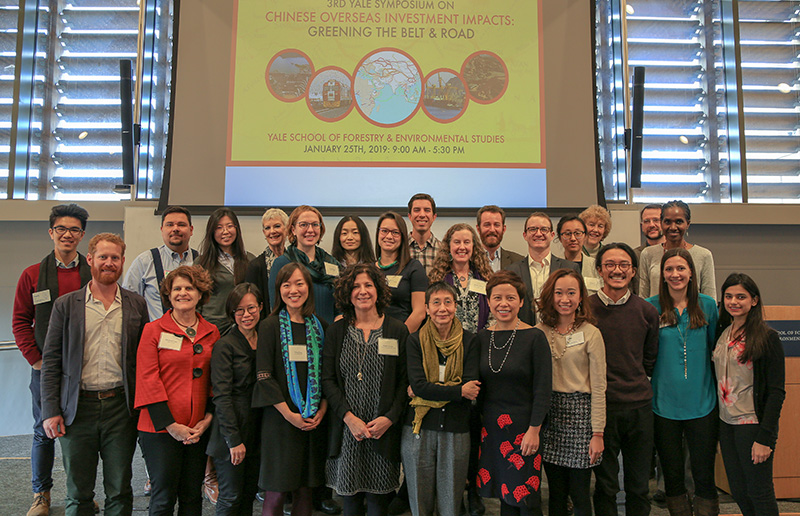 Further scrutiny of the BRI, however, is starting to reveal what many had feared might happen — extractive commercial practices, stifling public opposition and, critically, a disregard for environmental impact. But mainstream discussion on what some have called a “neocolonialist” initiative has focused primarily on economics, with few conversations focused on the environment.

“This is a conversation that needs to happen,” said Jennifer Turner, director of the China Environment Forum at the Woodrow Wilson Center.

Turner was the keynote speaker at the 3rd Yale Symposium on Chinese Overseas Investment Impacts held last month at the Yale School of Forestry & Environmental Studies (F&ES). The symposium gathered experts from across academia and NGOs to participate in panel discussions that focused on defining the BRI, the need for China to become a leader on climate action, and the impacts of the BRI on communities and ecosystems.

In her keynote address, Turner examined how, in stark contrast to domestic sustainability efforts in China, the Chinese companies building railways, ports, and power plants continue to stoke environmental and social concerns, drawing pushback in places like Malaysia, Myanmar and Kenya. Looking to the future, Turner stressed taking advantage of opportunities to “green” the BRI through renewable energy technology, international stakeholder engagement, and improved pollution control and construction practices.

At a panel discussion on sustainable finance moderated by Turner, both Xinyue Ma from Boston University’s Global Development Policy Center, and Jamie Horsley, senior lecturer at Yale’s Paul Tsai China Center, advocated for more stringent regulations on green financing for projects. Horsley said the BRI suffers from a noncompetitive procurement process — studies indicate more than 80 percent of BRI overseas projects have been awarded to Chinese companies — as well as a lack of transparency, insufficient overseas enforcement from the Chinese government, and a disregard for internationally accepted environmental standards.

But Yiting Wang ’14 M.E.Sc., program manager at the World Wildlife Fund, argued that market economies will push out fossil fuels sooner or later. As the world begins to shift its reliance on fossil fuels to renewable energy, it’s becoming apparent that the practices of drilling and mining are becoming too expensive — and the costs associated with air pollution and public health are making it worse.

Around the world, communities are bearing the brunt of the impacts of Chinese development finance. At the China-in-Latin America panel, Paulina Garzón, director of the China-Latin America Sustainable Investments Initiative, illustrated how Chinese capital is affecting the Ecuadorian Amazon and indigenous communities. At the China-in-Africa panel, Jingjing Zhang, a renowned Chinese environmental lawyer and 2008 Yale World Fellow, presented her research on how Chinese companies' operations have involved land-grabbing and pollution in Guinea and Sierra Leone. See a full agenda and a list of expert speakers.

The symposium was organized by a group of F&ES students, led by Nick Lo ’19 M.E.Sc. and Tina Huang ’19 M.E.M. Lo stressed the importance of tackling a subject that is “going to transform the world’s energy and infrastructural landscape” far beyond American borders.

“We didn’t want this event to simply critique China, because simplistic narratives don’t help us address complex issues,” said Lo. “We wanted to provide a space to introduce the many different dimensions of the Belt and Road Initiative and constructively discuss the ways that Chinese investments are shaping the world today — for better or for worse.”

To stay engaged with Chinese Overseas Investments Impacts at Yale, reach out to the Belt and Road Working Group at china-symposium-fes@yale.edu. Look out for the conference proceedings of this year’s symposium that will be released on the symposium websitesoon.
— Katie Bleau