Students Honored for Leadership
in Conservation and Wildlife Science

Two students from the Yale School of Forestry & Environmental Studies (F&ES) have been awarded the 2018 MK McCarthy-RW Worth Scholarship for Leadership in Conservation Science. 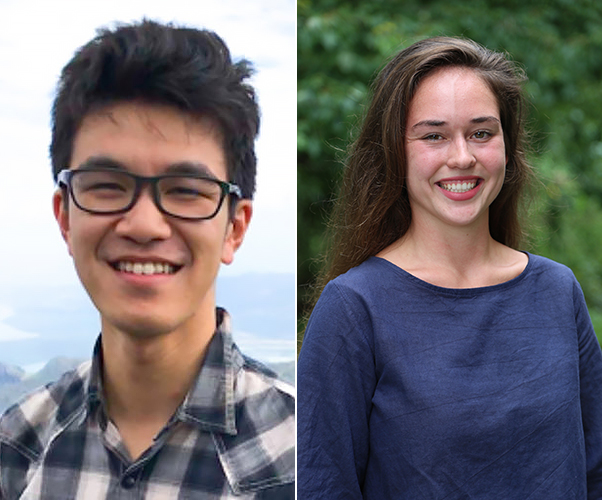 Andy Lee ’19 M.E.Sc., who has contributed to field research on animal species across Asia and Africa, and Kimi Zamuda ’19 M.E.Sc., who studies the impacts of land use on the mid-sized mammals that are critical to habitat health, were recognized for their demonstrated leadership in the field of conservation biology and wildlife science.

The scholarships honor their work both at F&ES and in their prior work experiences.

Lee completed his undergraduate degree at the University of Hong Kong, where he studied dolphin population ecology and social structure as a research assistant. To build his international experience, he has since worked on a range of research projects, collecting data on Chinese crested terns for BirdLife International’s breeding attraction program, assisting field researchers tracking Sunda clouded leopards in Borneo, and gathering data for research on African elephants in South Africa. He’s also participated in a shark fin trade study in Hong Kong and co-authored a paper on the rhino horn auction market in China.

As a research assistant for the Everest Snow Leopard Conservation Centre in the Tibetan Himalayas, Lee supported snow leopard conservation in rural communities, an experience that he says demonstrated the importance of socio-economic and cultural context in implementing successful conservation programs.

For his master’s thesis at F&ES, he conducted original research on the social and decision-making processes of large carnivore reintroductions in South Africa, a process that initiated dialogue between researchers, managers, and local communities in the promotion of human-predator coexistence and conservation.

“Successful conservation effort not only requires expertise from the various disciplines of ecology, sociology and policy science to inform decisions, but also a problem oriented framework that links their applications towards well-defined goals,” he said.

“Stakeholders in collaborative efforts should also be explicit about their standpoints, which is not always common in conservation projects. I aspire to take this role as a conservation leader to bring in different perspectives and bridge the gap between science, disciplines, policy and practice, using various tools including research, outreach and problem orientation.”

Before coming to Yale, Zamuda worked as a biological intern for the U.S. Fish and Wildlife Service. In that role, she conducted nesting surveys on endangered species — the American crocodile and the Key Largo wood rat — and monitored and trapped invasive species. Prior to that, she conducted research as an intern with the U.S. Geological Survey, studying foraging ecology and distribution of endangered/threatened sea turtles and determining return rates of nesting turtles.

At Yale, she has studied the effects of land use, such as timber harvest and agricultural practices, on “mesopredator” mammals, which she hopes will be applied to habitat conservation and management practices within Yale Myers and beyond. She’s also working with the Yale Forests to initiate a long-term camera trapping program, engaging both students and local land owners.

“Given the challenges we face (climate change, escalating human population, pollution, unsustainable development), my vision is to work toward coexistence landscapes across the planet, with areas of wildland/wilderness protected throughout,” she said. “With this vision in mind, the field of conservation science requires fundamental changes in research, management, mindset and collaboration. Applied research in this field should strive for clear problem statements, goals and applications.

“We need to move away from collecting copious amounts of data with no explicit purpose or application, as it can waste limited resources. Our management strategies toward wildlife and ecosystems must be informed, supported by research and knowledge, and adaptive. Conservation needs a forward thinking, holistic landscape-level perspective to guide our thoughts and actions.”

The MK McCarthy-RW Worth Scholarship, which provides $2,500 to each recipient, was established in 2015 by Margaret McCarthy ’82 B.A., and her husband Robert Worth, to benefit master’s students who have completed a minimum of two semesters at F&ES and have demonstrated leadership in the field of conservation biology and wildlife conservation.

“We are inspired by these two conservationists,” said McCarthy. “They each have accomplished so much in their careers to date and we are excited to see what they tackle next.”

The idea for the scholarship was proposed by former co-chairs of the “ConBio” Student Interest Group, Tara Meyer ’15 M.E.Sc. and Danielle Lehle ’15 M.E.M., who sought to honor the significance of conservation and wildlife science among F&ES students.