But as her research has shown, those microscale processes can have very big impacts across the landscape.

In one study, Keiser found that reductions in soil carbon as a result of human disturbance — such as tree clearing — in turn promote nitrification at the landscape scale, which ultimately might impact the health of entire ecosystem. In a watershed, she says, everything is connected. 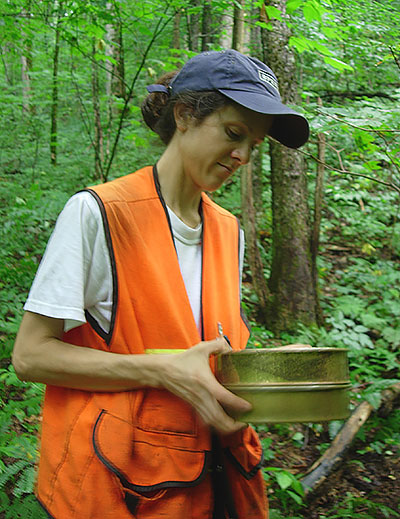 While much of her doctoral research examined the impacts of global change on the carbon cycle through plant–soil feedbacks, the Bormann Prize committee highlighted her study, published in the journal Ecosystems, which examined the dynamic relationship between carbon availability and nitrogen transformations. The paper was co-authored by Mark Bradford, professor of terrestrial ecosystem ecology at F&ES, and Jennifer Knoepp of the U.S. Forest Service.

For that study, Keiser, who is now a postdoctoral research associate at Iowa State University, spent several weeks sampling 10 sub-watersheds with different disturbance histories in the southern Appalachian Mountains. Within each sub-watershed she collected and analyzed soil samples taken from 50-meter transects covering representative gradients. Specifically, she wanted to compare an extensive set of soil and nutrient variables at the landscape scale, at low and high elevations, and between sites located near the streambed or in upload locations.

“We knew there might be many drivers influencing nitrification,” she said. “But at the watershed scale what it really all came down to was whether those sub-watersheds had been disturbed through human influence — such as clear-cutting or shifting forest types. This landscape disturbance alters the amount of soil carbon available, which in turn affected whether nitrification occurred or did not occur.”

Nitrification is the biological process in which ammonia, a form of nitrogen found in the soil, is converted into nitrate. As previous research suggests, microbes in soil where carbon is abundant require ample nitrogen to meet their metabolic needs. By consuming that nitrogen to meet their own needs, the microbial community can prevent nitrification.
“Our findings get back to [Bormann’s] ‘whole ecosystem’ approach, which suggested that when you perturb one end you’re impacting everything down the line.”
— Ashley Keiser ’14 Ph.D.
While that dynamic wasn’t surprising, Keiser said, finding evidence that carbon can control nitrogen dynamics at the landscape scale has important implications. It offers key insights into the broad, long-term nitrogen cycling patterns in forests and how they relate to the health of aquatic systems. Less stable than nitrogen, nitrates are highly mobile, and are able to move swiftly through ecological systems. For instance, if microbes or plants don’t snatch them up, nitrates can leech into waterways, which can degrade water quality, and create health risks.

“And that gets back to what Dr. Bormann showed in his work,” Keiser said. “He clear cut a forest and showed that it altered the nitrogen cycle. We always thought that altering forests impacted hydrology, but it also impacts nutrient cycling.”

Bormann, who taught at F&ES from 1966 until 1992, was a plant ecologist whose research first called the world’s attention to the threat of acid rain in the 1970s. During his career, Bormann’s research helped scientists better understand the complex but irrefutable relationship between humans and the environment.

“Our findings get back to his ‘whole ecosystem’ approach,” Keiser said, “which suggested that when you perturb one end you’re impacting everything down the line.”