Success in an ‘Accidental Profession’

A broad science background and some old-fashioned pluck helped Jean Thomson Black ’75 MFS build an impactful career in science publishing, for which she was honored with the School’s Distinguished Service Award at Reunion Weekend 2020.
By Josh Anusewicz 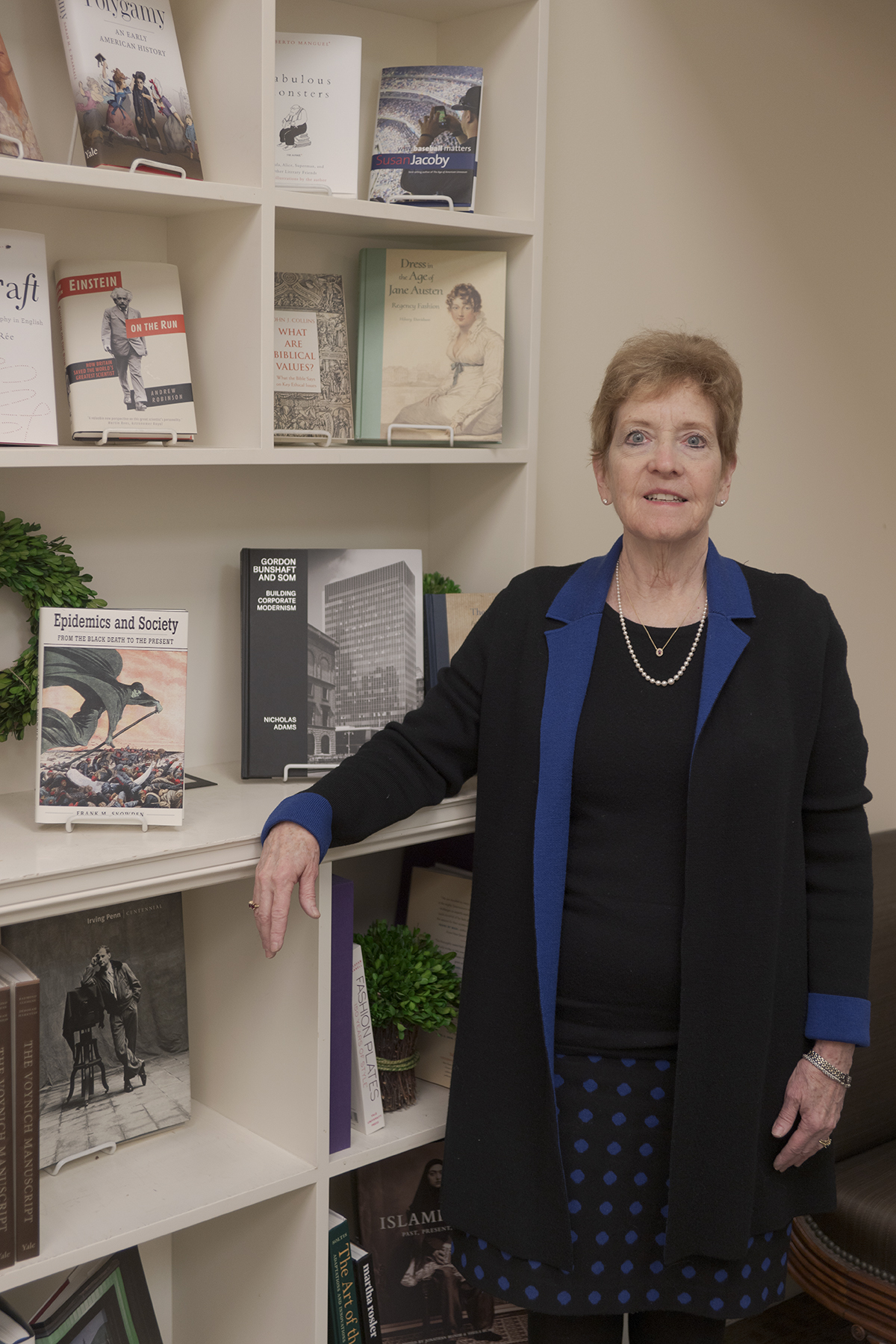 Jean Thomson Black '75 MFS has helped publish countless books in the sciences, including the new (and timely) "Epidemics and Society" by Yale professor Frank Snowden.
To some, publishing is referred to as an “accidental profession,” with no defined one path to enter the field. For Jean Thomson Black ’75 MFS, that path included a background in science, a move to New York City, and a job search using the Yellow Pages.

In the decades since, Black has cemented her status as a preeminent publisher in the sciences, becoming the first full-time science editor at Yale University Press in 1990 and working up to her current role as senior executive editor in 2014. For her numerous professional accomplishments, Black received the Distinguished Service Award from the Yale School of the Environment (YSE) at Reunion Weekend 2020, Oct. 9-11.

“This work is very invigorating — always something new and exciting, an interesting new author to publish or a new idea to help bring to fruition,” says Black of publishing. “With each new book comes something different and fresh.”

That intellectual curiosity is what initially attracted Black to YSE after she earned a degree in biology from Wellesley College. With a particular passion for ecology and animal behavior, she eschewed an offer to join the Peace Corps for an opportunity to learn from professors like F. H. Bormann, who had, along with other scientists, established the well-known Hubbard Brook Ecosystem Study, and Tom Siccama. Another attraction was Yale’s highly regarded ecologist, G. Evelyn Hutchinson, who was still on campus as an emeritus professor in the mid-1970s.

Black made the most of her time on campus, taking undergraduate and graduate courses in natural resource economics, botany, evolution, and experimental design, taught by “dynamic and creative faculty who really cared about teaching students,” she says. And though she admits she “didn’t appreciate it at the time,” this interdisciplinary experience was laying the groundwork for her to succeed in publishing.

After graduating from YSE and a flirtation with a graduate program elsewhere, Black relocated  to New York City. She set out to find a job — though she wasn’t sure what she would do. Her broad science background and keen organizational skills led her to pursue science publishing, as there were several academic publishing houses in the city. She searched the local phone book and sent each one a resumé and cover letter, and took a copywriting course at CCNY in the meantime. She soon secured an entry-level position as a copy editor at Academic Press and was on her way.

A little more than a decade later, Black was hired as the first full-time science editor at Yale University Press, where she was tasked with developing a publishing program in science, medicine and environmental issues. The program has many books from some of the biggest names in the sciences, including Nobel Laureates and winners of the Tyler Prize and Blue Planet Prize.  She also had the rewarding opportunity to publish F. H. Bormann several times and, very recently, and book summarizing the first 50 years of research at Hubbard Brook.

Having spent nearly half of her life within the Yale community, Black says she “isn’t quite finished” and is continually inspired by the learning community around her — particularly at YSE — to “carry on a challenging job.”

“The School has given me so much,” says Black of YSE. “I continue to learn so much from the community, and I try give back what I can to help the School achieve its goals.”