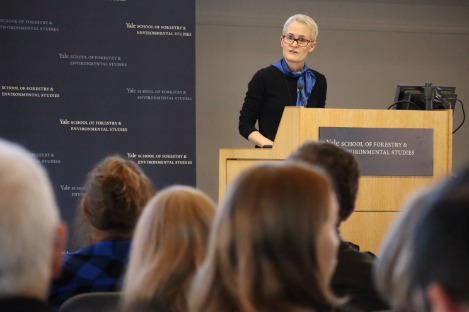 Claudia Sanchez de Lozada
Miranda Massie, director of The Climate Museum in New York City, delivered the opening remarks for the Yale Environmental Sustainability Summit.
Global biodiversity is in crisis. According to a report published by the United Nations earlier this year, trends toward extinction for many species on Earth are “unprecedented” and “accelerating.”

But what can we do about it?

Experts, alumni, and students tackled this question at this year’s Yale Environmental Sustainability Summit (YESS), held at the Yale School of Forestry & Environmental Studies (F&ES). This year’s summit, “Dispatches from the Future,” aimed to address how collective, forward-thinking environmental action is needed in the midst of rapid change and uncertainty.

“The biggest concern we face is our current path to total global extinction for a number of species,” said Walter Jetz, professor of ecology and evolutionary biology at Yale and a contributor to the U.N. report. Biodiversity, he explained, is linked to ecosystem services, so we need to safeguard species for the welfare of future generations.

“Species have functional importance within the ecosystems they inhabit,” furthered Clara Pregitzer, a Ph.D. candidate at F&ES and conservation scientist at the Natural Areas Conservancy in New York City, “and often we don’t know how important they are until they are already gone."

Jetz and Pregitzer were part of a panel titled “On the Frontlines of Biodiversity Conservation,” one of several panels held throughout the two-day event. Additional panel topics included decarbonization, environmental storytelling, recycling, and immigration.

YESS presented an opportunity to connect biodiversity with climate change adaptation and mitigation — a similar tact taken at this year’s United Nations Conference of Parties (COP) in Madrid, the U.N.’s annual global climate change summit. This year’s conference was dubbed the “Blue COP,” giving priority to discussing and identifying solutions for habitat and biodiversity loss in ocean ecosystems.

The YESS panelists unanimously agreed that humans have accelerated the biodiversity crisis by changing land use, degrading habitats, polluting, and the spread of invasive species — primarily driven by economic gain. But new, innovative strategies for conserving biodiversity are improving. Gator Halpern ’15 M.E.M. co-founded Coral Vita, a coral restoration company that revives coral lost from climate change effects and replaces them in the wild. Their technique uses coral’s healing structure to grow these animals in land-based farms at rates 50 times faster than its natural rate.

“Actively restoring coral ecosystems is a necessary tool to continue receiving services from them,” said Halpern during the panel.

Legal strategies have also created an avenue for habitat restoration. One million acres of pollinator habitat have been restored through the 2018 federal “Farm Bill,” stated Emily May, pollinator conservation specialist for the nonprofit Xerces Society. Locally, communities are using bottom-up policy strategies; in Connecticut, May said, a 75-town coalition is creating “pollinator pathways” — natural areas free from pesticide use.

“Optimism and exciting solutions are out there, and companies and industry have a lot of potential to have a meaningful impact in that space,” said Jetz. “There is a tremendous amount going on at every level — local to global — and we are going to see some of these economic efficiencies and governmental inefficiencies being solved.”

The YESS agenda also featured remarks from Miranda Massie, director of The Climate Museum, and a keynote address from John Shenk, co-director and cinematographer of the environmental documentary An Inconvenient Sequel.
Katie Bleau ’20 M.E.M. is a joint-degree student at the Yale School of Forestry & Environmental Studies and Vermont Law School.