Skip to main site navigation Skip to main content
Home » News » Teach-In at Yale: The Amazon is Burning, so What Can Be Done?

Teach-In at Yale: The Amazon is Burning, so What Can Be Done?

As part of last week's Global Climate Strike, a group of F&ES students hosted a 'teach-in' about the ongoing wildfire crisis in the Amazon rainforest, identifying policies and actors that are contributing to the problem and ways that members of the Yale community can respond.
By Katie Bleau

Shutterstock
An ecological and humanitarian catastrophe. A planetary emergency. Human-ecological disaster. These were some of the words used to describe the ongoing crisis unfolding in the Amazon rainforest during a F&ES “teach-in” and call to action on Sept. 27.

The event was part of last week’s Global Climate Strike, which saw more than 7.6 million people worldwide urge climate action. It was organized by leaders from several F&ES student interest groups — including Environmental Justice at Yale, the International Society of Tropical Foresters, Sustainable Food & Agriculture, Fire, and PhD Student Interest Groups with the Yale Endowment Justice Coalition. The goals were to clarify the facts about the Amazon fires, identify the policies and actors contributing to the problem, and determine how members of the F&ES community can respond.

Liza Comita, an associate professor of tropical forest ecology, set the scene. Speaking to the group, she described the ecology of the Amazon Basin, the drivers of deforestation in the region, and the landscape effects of forest clearing. Deforestation driven chiefly by beef, soy, palm oil, and wood products, she said, has resulted in habitat fragmentation and degradation, edge effects, and fire.

Approximately 80,000 fires have been documented in the Amazon Basin in 2019 — the highest number since 2010. Even more worrying, said Comita, increased deforestation will cause additional fires in the future. Fire is not a natural part of tropical forest systems, so even low intensity fires can have a hugely negative impact that is likely irreversible, she explained.

The issue of deforestation in the Amazon is complicated by a presidential administration in Brazil which has been characterized as “anti-environmental” and an enormously powerful agribusiness sector. 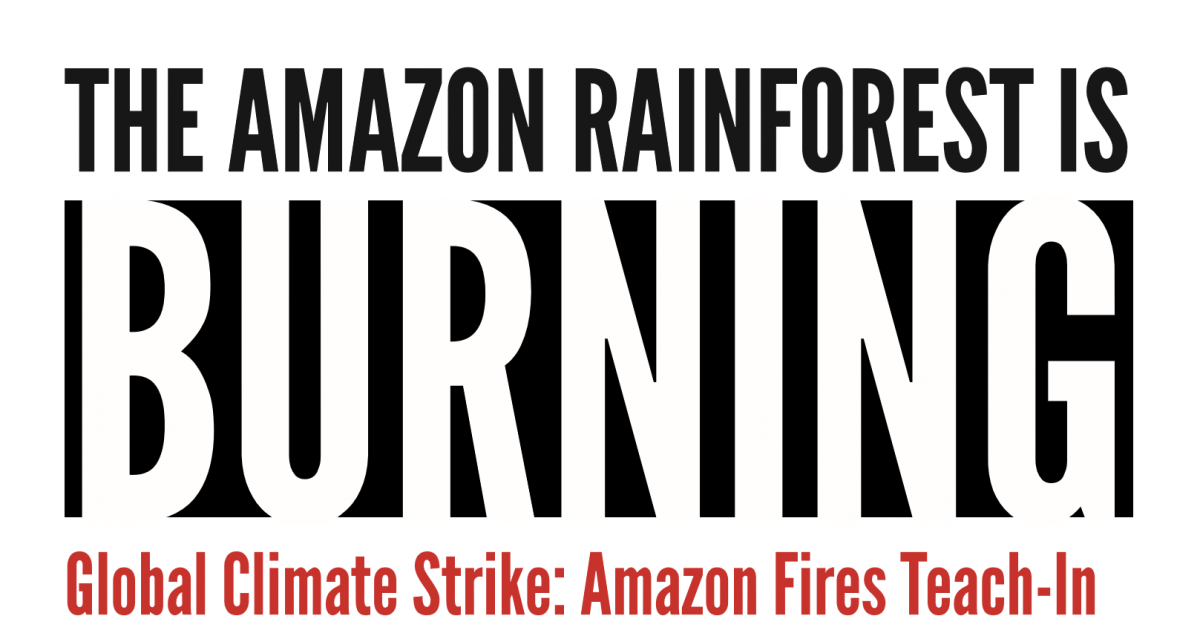 During the teach-in, which was held in Kroon Hall, speakers from the nonprofit group Amazon Watch and The Intercept, an online news publication, emphasized the need for systemic change in the Amazon Basin. Consistent with this message, F&ES students advocated for institutions like Yale to divest from companies that have been identified as “bad actors” or activities that perpetuate environmental and social injustices.

“We see the ongoing human-ecological disaster of fires and deforestation in the Amazon as an environmental injustice with global impact,” said Kelsey Hartman ’20 M.E.M. “As Yale students, one of the most effective ways we can support the peoples and forests of the Amazon is by addressing our own institution’s complicity in the global climate crisis and financial ties to Amazonian deforestation.”

“The world is like a heart, and it can be sick as well,” said Pat-I Kayapo, a Mebengoktre tribal member and filmmaker. “It needs to be cared for and defended.”
Katie Bleau ’20 M.E.M. is a joint-degree student at the Yale School of Forestry & Environmental Studies and Vermont Law School.