The Challenge of Creating
‘Ecological Civilization’ in China

In the last decade the Chinese government has realized the need to create not just a prosperous and technologically sophisticated society but an “ecological civilization” based on its cultural and religious traditions. In the sacred mountains of Henan, Yale Professor Mary Evelyn Tucker recently participated in the Songshan Forum, an annual meeting that has become part of this effort.
By Mary Evelyn Tucker 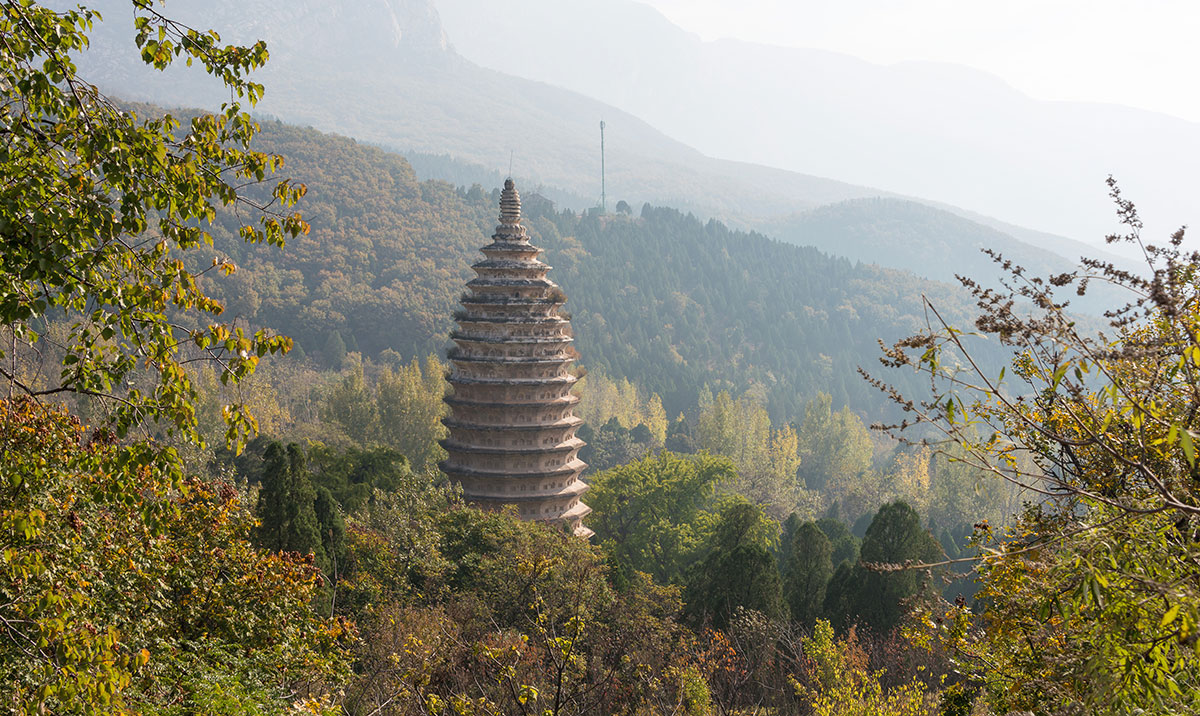 Beibaoke via shutterstock
The plane arrived in one of the world’s most polluted cities, Zhengzhou, in western China. My husband, John Grim, and I were here for the Songshan Forum focused broadly on “Ecological Civilization” held in mid-September in Dengfeng. This is in Henan, a province of some 94 million people. If Henan were a nation-state it would be the world’s 12th-largest economy. China’s rapid modernization in a few short decades — on a scale unfathomable to most Americans — has resulted in staggering environmental problems, which are evident here.

Henan is in the midst of a severe drought, as are many parts of China. We saw the burnt-out crops of corn and wheat. The local river, now channeled into concrete basins, has dried up from a lack of runoff from the surrounding mountains. We feel the air thick with smog and particulate matter. At times it is hard to breathe. It is now obvious that the price to pay for modernization is indeed high in China.

The air, water, and soil are polluted. Food is tainted with pesticides. Water for drinking or irrigation is diminishing. Infant formula has been contaminated and children have died. Families are trying to buy safe formula from abroad. The health of the Chinese people is being severely compromised. Everything about contemporary China invites rethinking “economic progress” and reimagining appropriate limits to growth.

What happens when more than a billion people seek the fruits of modernity — electricity, cars, refrigerators, television, cell phones? Sustainability and equity, along with food and water, are challenged on a vast, indeed planetary scale. China’s resource demands are depleting forests and fisheries, along with oil and coal, around the world. China is drawing on sources across North America, including the tar sands in Canada. Even more will be extracted there if the proposed Keystone pipeline is built through the U.S.

The environmental and social problems seem intractable. How can the life-support systems, which give us food and water, be preserved? Where can we find traction for sustainability? Clearly we need science, policy, law, technology, and economics to solve these issues. But spiritual and ethical perspectives of the world’s religions must also be brought to bear. And so it is, against great odds that some Chinese are trying to reconfigure their assumptions of endless growth and extraction and find a path toward a sustainable future. This is why we have flown 8,000 miles in 24 hours from New York to Shanghai and on to the heartland of the ancient Yellow River valley civilization of China.

Courtesy of Mary Evelyn Tucker
Mary Evelyn Tucker, center, participates in a discussion during the Songshan Forum in Dengfeng, China.
Why now? Why here? The pressing answer is that pervasive pollution across China is putting the entire nation at risk. In the last decade the Chinese have realized the need to create not just a prosperous and technologically sophisticated society, but an “ecological civilization” based on the cultural and religious traditions of China. The Songshan Forum, which has been meeting yearly since 2011, is part of this effort. The setting of the conference, Songshan, a UNESCO World Heritage Site, is one of the sacred mountains of traditional China. Here the three religions of China — Confucianism, Daoism, and Buddhism — have given unique expression to their interwoven history. At Songshan there is not only the famous Shaolin Buddhist Temple, so closely associated with the “meritorious actions” (kung-fu) of the martial arts, but also the Confucian Songyang Academy and the Zhongyue Daoist temple. Now, the region’s majestic mountains are often hidden in sulfurous acidity rather than the misty clouds of the traditional Song Dynasty landscape painters. But a revival of China’s religious traditions, especially Confucianism, is underway, with significant implications for environmental awareness.

These traditions were nearly obliterated in the Cultural Revolution under Mao from 1966 to 1976. He sought to destroy the past and create a new socialist future for China, with devastating impact on both society and the environment. Four decades later, politicians, academics, journalists, and ordinary people are exploring how Confucian moral philosophy and ethical concerns can be resuscitated to strengthen a sustainable future.

In November 2012, the government added the goal of “establishing ecological civilization” to the Chinese constitution. Numerous policy papers have been written on this and conferences organized on how to realize this long range goal. Several years ago, the governor of Henan and his ministers attended the Songshan Forum, where his finance minister called for an innovative “circular economy” that leaves no waste through the processes of production, consumption, and recycling. While “ecological civilization” sometimes has lofty sounding goals and minority people wonder about their role, efforts such as this for an efficacious industrial ecology are noteworthy.

Academics are exploring Confucianism and have translated books about religion by western scholars into Chinese. This includes the three volumes on Confucianism, Daoism, and Buddhism from the Harvard conference series on world religions and ecology we organized from 1996-98. A book on Confucius by media professor Yu Dan has sold over 10 million copies. One of the leading scholars of the Confucian revival is Tu Weiming, formerly at Harvard, and now directing the Institute for the Advanced Studies in Humanities at Beijing University. He has been the principle academic organizer of the Songshan Forum since its founding and an inspiration to many on the role on Confucianism within modernity. 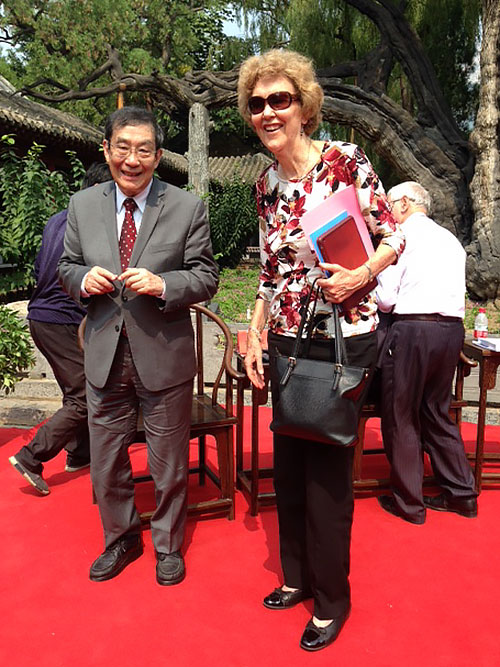 Courtesy of Mary Evelyn Tucker
Mary Evelyn Tucker with leading Confucian scholar Tu Weiming.
The 2017 Songshan Forum underscored the urgency of China’s environmental challenges and the potential of its Confucian heritage. This is within the context of worldwide environmental challenges exacerbated by climate change. The conference included a morning at the 1,000-year-old Confucian Academy. It was a beautiful day with uncharacteristically clear skies, a brisk wind, and the rhythmic chorus of cicadas. Tu Weiming and three other Confucian scholars, along with a Russian scholar, and myself — addressed more than 150 people on aspects of Confucianism for social inclusivity and ecological sustainability. I emphasized Confucianism’s comprehensive cosmological worldview, its high regard for the value of nature, its relational view of humans as partners with nature.

This has been a long journey for me into the study of Confucianism and Confucian-influenced societies such as Korea, Japan, Taiwan, Vietnam, and Singapore. It began in 1973-74 when I went to Japan to teach at a women’s university, and it continued in my Ph.D. studies at Columbia University. I was fascinated by how these Confucian-based countries organized their societies in a communitarian manner and managed their environments with government oversight. Though ideals were not always realized historically or at present, studying the religious traditions of Asia has broadened my understanding of the variety of environmental ethics in cultures around the world.

It has been sobering to watch China over the last four decades struggle to feed large numbers of people and have fresh water for drinking, irrigation, and hydroelectric power. Veering now toward unsustainability and facing 100,000 environmental protests a year, the Chinese government and some of its people are trying to steer a different course.

Thus in the midst of immense challenges, Confucian ecological philosophy and environmental ethics are emerging. A revival of Confucian values is growing. The future of our planet may well depend on the pace of that growth — not in material wealth, but in moral values that return us all to the essential Confucian virtue of humaneness. This virtue implies that people belong to a larger whole, the great triad of “Heaven, Earth, and Humans.” Humans are part of the processes of the cosmos and of nature and are responsible for completing the triad. They can do this by creating the foundations for humane government, harmonious societies, sustainable economies, flourishing agriculture, and moral education. No wonder there is a growing interest in a new Confucianism for contemporary China. No doubt there is something we in the West can learn from this rediscovery as well.

Mary Evelyn Tucker is a Senior Lecturer and Research Scholar at Yale, where she teaches in the joint master’s degree program between the Yale School of Forestry & Environmental Studies and Yale Divinity School. She is a Confucian scholar who has published five books on Confucian philosophy, spirituality, and ecology. She directs the Forum on Religion and Ecology at Yale with her husband, John Grim. Their writings include, Ecology and Religion (Island Press, 2014). In 2011 they released a multi-media project called Journey of the Universe  with evolutionary philosopher Brian Swimme, drawing on the work of historian of religions Thomas Berry. Journey of the Universe  includes a book from Yale University Press, an Emmy-award winning film, and a series of 20 interviews with scientists, historians, and environmentalists.  These are also available on online classes through Yale/Coursera. The courses were released in Chinese on October 1, 2017. More information