The Judge and the Frog: Student
Takes Expertise to Supreme Court

Dual-degree student Katie Bleau was at the United States Supreme Court on one of the more important moments in its recent history — but not for the reason you think. She tells the story of her role in an important endangered species case on a memorable day in Washington.
By Katie Bleau
At 10 a.m. on Oct. 1, the country’s eyes were glued to the confirmation hearings for Judge Brett Kavanaugh before the Senate Judiciary Committee in Washington. Outside, protests raged against the controversial nominee.

Directly across the street, in the U.S. Supreme Court Building, the sitting justices were hearing a case about the critically endangered dusky gopher frog.

The case was Weyerhaeuser v. United States Fish and Wildlife Service, in which a major timber company is suing the government agency for designating its private land as critical habitat. Hundreds of hopeful attendees began lining up as early as 3 a.m. for a chance to earn one of the 50 allotted public spots inside the courtroom. I was lucky enough to be chosen.


My interest in this case began in January when I was a student clinician in Vermont Law School’s Environmental and Natural Resources Law Clinic (ENRLC). As a critical environmental case, three environmental law programs — Vermont Law School, Lewis and Clark Law School, and Georgetown Law — collaborated on an amicus brief to persuade the justices in favor of respondent U.S. Fish and Wildlife Service (FWS) and an intervenor, the Center for Biological Diversity. 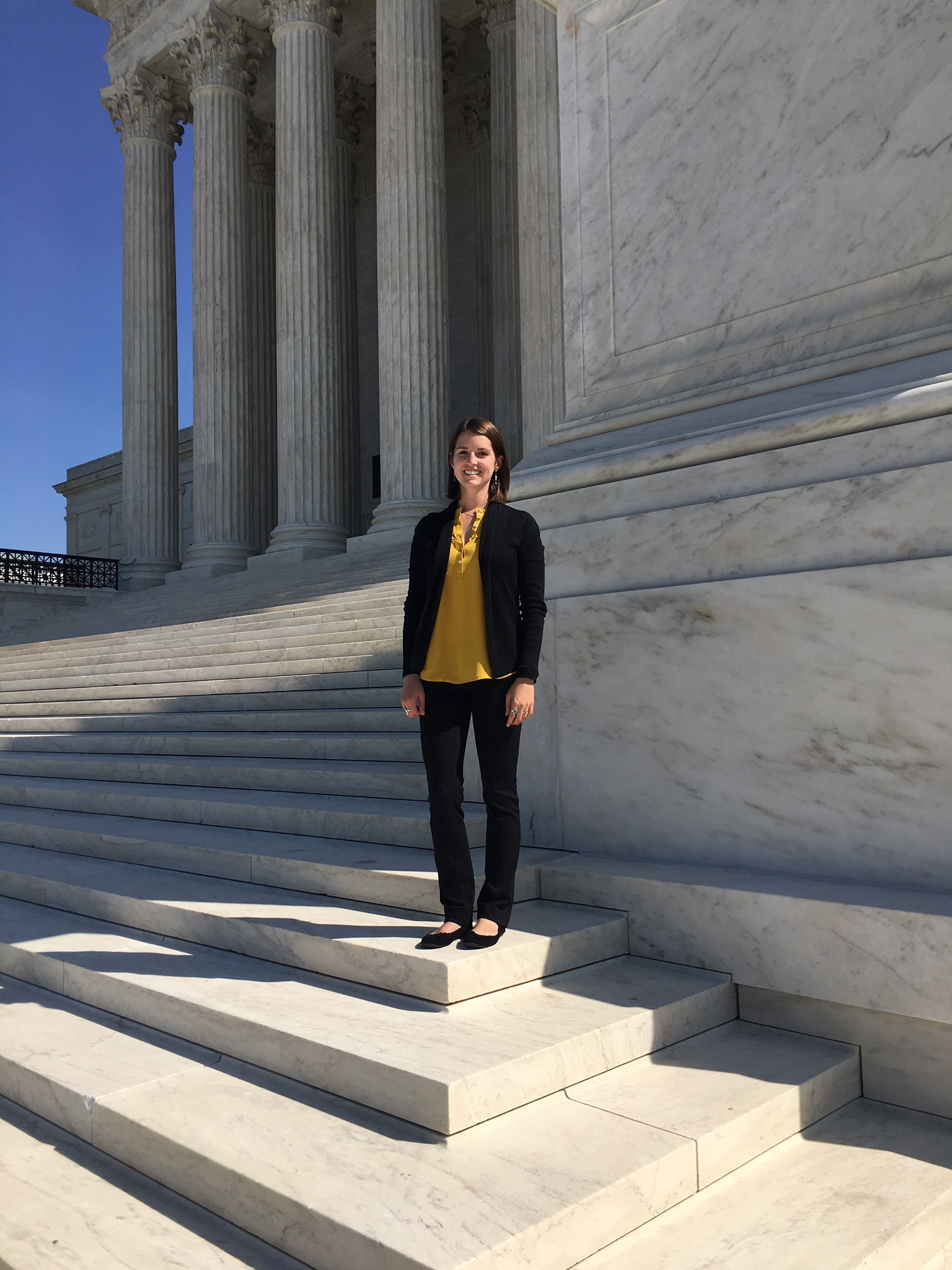 Katie Bleau ’20 M.E.M. outside the U.S. Supreme Court in October.
When I learned the ENRLC planned to work on a case that weaves science and law, I jumped at the opportunity. Pat Parenteau, the senior counsel for the ENRLC, led my supervising attorney, Elizabeth Tisher, and me in writing a statutory interpretation argument supporting the federal government’s critical habitat designation.

I combined my knowledge in law and science to write an argument addressing the critical role of species recovery under the Endangered Species Act (ESA) in the context of one umbrella species: the dusky gopher frog, among the most threatened species in the world. Once abundant across the Gulf Coast, the current wild population of this amphibian now numbers fewer than 135, scattered across three fragmented locations in Mississippi.

Dusky gopher frogs are particularly at risk due to habitat loss expedited by climate change. Anticipating this risk, the FWS designated a parcel of land in Louisiana possessing essential features to serve as a refuge for the frog separate from its current habitat in Mississippi. Species recovery requires future expansion into new territory to support a larger, recovered population, thereby necessitating the designation of geographically distant or presently unsuitable lands as critical habitat.

Crafting the argument required understanding the role of science in underpinning the theme of recovery throughout the ESA. Due to the technical nature of the case, my status as an ecologist and a law student was particularly valuable to convey why this parcel was essential to the species’ survival.


After seven months of research, writing and editing, the case all came down to one hour of oral arguments before the Supreme Court.

The Court was divided during arguments.  Conservative justices were concerned over private landowner rights, while liberal justices leaned in support of the FWS’s authority to designate essential habitat for the species’ future survival.

There was no disputing that the critical habitat parcel is not currently habitable. The frog needs open canopy longleaf pine-savanna, but the current land is densely managed loblolly pine. Nevertheless, the Secretary of the Interior is directed under the ESA to designate such habitat as long as that habitat is essential and could become habitable via “reasonable improvements.” The key hang-up for all justices: what exactly is “reasonable?”

Justice Elena Kagan opined, “It is a counterintuitive result that the statute would prefer exctinction of the species to the designation of an area which requires only certain reasonable improvements in order to support the species.”

The conservative justices, including Chief Justice John G. Roberts Jr., were concerned with the limits of the ESA’s reach. If the FWS designates critical habitat that cannot be occupied by the species until restoration measures are taken in the future, then “you ought to be able to articulate what the limit is on what you require down the road,” Roberts said.

At the close of the argument, the Court seemed to remain split over the issue. Yet on Nov. 27, the Court unanimously vacated the lower court’s ruling, sending the decision back to the U.S. Fifth Circuit Court of Appeals. The case was directed to the Fifth Circuit to reconsider two issues: the meaning of the term “habitat” in the context of the ESA, and whether the FWS decision not to exclude the unoccupied critical habitat parcel based on economic costs was proper. Principally, the Court wondered how critical habitat is not habitat in the first instance.

Throughout the argument and while reading the recently published opinion, I considered the stance put forward in our amicus brief. As ecosystems across the country face the consequences of climate change, this case is incredibly critical. Without the ability to designate unoccupied, presently unsuitable areas as critical, the Secretary of the Interior lacks the tools to protect sufficient habitat for the recovery of dusky gopher frogs and similarly species at risk from climate change.

I feel a great sense of accomplishment in participating in this case. Being a dual degree student is often difficult and overwhelming; I have sometimes questioned my resolve.  Participating in this case and witnessing the arguments before the highest court affirmed my choice to study law and science. I feel emboldened to one day be an environmental attorney to argue for the future protection of our environment.
Katie Bleau ’20 M.E.M., a first-year student at the Yale School of Forestry & Environmental Studies, is pursuing a joint degree at Vermont Law School.