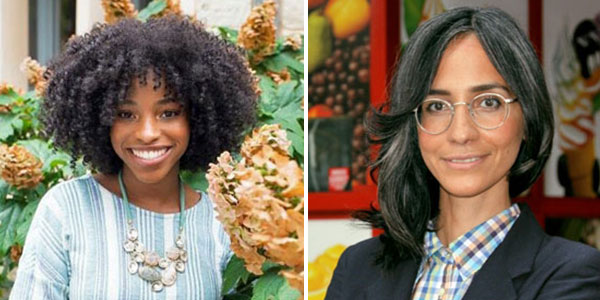 The environmental fellowship program is a core program of the Robert & Patricia Switzer Foundation, a nonprofit organization that invests in individuals and organizations that drive positive environmental change across a range of disciplines. Fellows are selected from universities across New England and California.

Recipients receive a $15,000 award for academic study and leadership training. The Yale scholars also join a network of more than 600 Fellows located across the U.S. and the world.

Jolisa Brooks, who is pursuing a Masters of Environmental Science, focuses her research on environmental peace-building in international development with an emphasis on regions with the so-called “resource curse,” a phenomenon in which nations with abundant natural resources tend to have less economic growth and poorer development outcomes. Before coming to Yale, she served as a corporate responsibility analyst for ArcelorMittal USA. In that role, she worked on a range of projects, including land restoration at former industrial sites and strengthening STEM programs for inner-city youth in Chicago.

A graduate of Michigan State University, she has also worked on international policy as a legislative fellow with the U.S. House Committee on Foreign Affairs, where she contributed to the Power Africa Initiative, the Education for All 2016 initiative, and the USAID Frontline Civilian Project. At F&ES, she co-founded the student interest group, ROOTZ, which is dedicated to cultivating Black environmental leaders. After graduating she plans to serve as an Environment Officer with the U.S. Foreign Service.

Brunilda Pizarro, who is also pursuing a Masters of Environmental Science degree, is a food systems researcher and advocate for social justice. Through coalition building and institutional partnerships, she hopes to bring a cultural, social, and political dimension to alleviate food insecurity. Her research engages communities of color and grassroots organizations to understand American urban inequality in the food system. By examining the local food environment through the lens of the underserved, she believes her work can shed light on the mechanisms by which neighborhood environments affect food access and health.

Before coming to Yale, Pizarro worked as a Research Assistant on an ethnobotanical study at the New York Botanical Garden where she focused on the cultural knowledge of medicinal plants of Latinx and Caribbean communities in New York City. Through her research and advocacy, she hopes to break the cycle of food insecurity and begin to reframe environmental discourse in urban communities.

Among the other 2017 Switzer Fellows is Aisha Saad, a Yale Law School student focused on human rights abuses and corporate environmental liability.