By Kevin Dennehy
In the late 1970s, most people were writing off the mountain gorilla, a critically endangered species found in only a few pockets of Africa. But in the late 1970s, conservationist Bill Weber and his wife, ecologist Amy Vedder, launched a conservation initiative in the Congo Basin that was built around a premise that was unconventional at the time: put the needs of local people at the center of the effort. 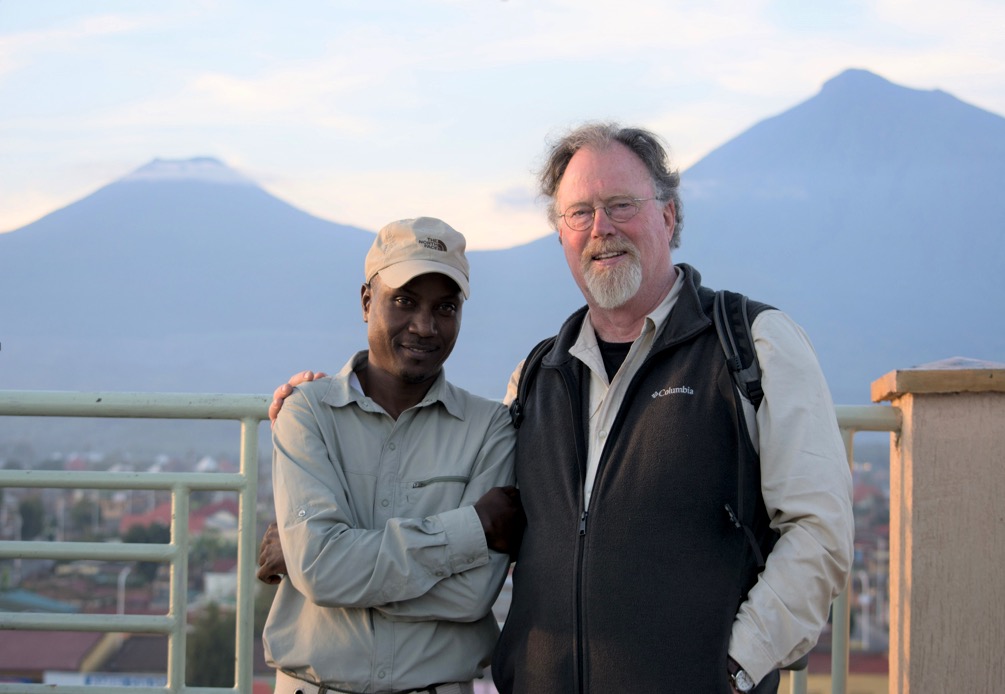 Bill Weber, right, with Yasin Hamdan, a Rwanda EcoTours master guide.
Over the past four decades, Weber has done pioneering conservation work across the planet, including in the American West, but it is for this work that he is perhaps most well-known. And, he says, it was the conservation principles that he helped introduce in Africa, including several years in Rwanda, of which he is proudest. In 2001, Weber and Vedder published a best-selling book, “In the Kingdom of Gorillas,” which chronicled their efforts to conserve Rwandan wildlife and wildlands.

Last week Weber, who is now a social scientist and lecturer at the Yale School of Forestry & Environmental Studies, was among 31 conservationists nominated for the prestigious Indianapolis Prize, a global award that recognizes conservationists for achievements in advancing sustainability of an animal species or group of species.

Recently, we chatted with Weber about his work in Rwanda and about the growing recognition that any successful wildlife conservation project must also consider the impacts on local people.

You and Amy have spent so many years working on mountain gorilla conservation in the Congo Basin. What do you consider the legacy of that work?


Bill Weber: In the mid- to late-1970s, everyone was writing off the mountain gorilla. They were on their way to extinction, it was thought, and groups didn’t even want to put money into funding conservation because population numbers were getting so low. One thing I brought to the gorilla equation — and which was very rare in conservation at the time — was the idea that people, particularly local people, had to be a central part of the equation. You couldn’t just focus on animals, and you couldn’t just focus on their habitat. You had to realize that local people were living around and among some of the world’s most endangered areas and species. So you really had to go out and do research on their interests, needs, aspirations, attitudes — and then build conservation action around that information.

Also, we were able to use our research to convince the government that there was enough habitat for the gorilla population to survive and even increase their numbers. As a result, they put off clearing more of the park for a cattle-raising project, which allowed us to start what was called ‘the Mountain Gorilla Project.’ That was the beginning of what we would now call an ecotourism program focused on gorillas — though, at the time, we weren’t clever enough to think of the word ‘ecotourism.’

How did it work?


Weber: It’s a program that brought in small numbers of people — a maximum of eight people for one hour a day — to sit and hang out with a family of one of our closest non-human relatives. It continues to this day and has brought in hundreds of millions of dollars. Before I started the project in August of 1979, during the preceding year the park brought in a little more than $7,000. Now the park makes about $20 million per year, almost entirely because of the gorillas.

“Before I started the project in August of 1979, during the preceding year the park brought in a little more than $7,000. Now the park makes about $20 million per year, almost entirely because of the gorillas.”
— Bill Weber, social scientist and lecturer at F&ES
One of the lessons was that you could make money by protecting these animals and their habitat. Peoples’ attitudes turned around, from being negative toward the park to being very positive. But the bottom line in conservation is, how are the critters doing? I counted 262 gorillas in 1978. There are now 604. It’s a huge turnaround for a highly endangered, very slowly reproducing population — an incredible result.


Why do you think there was such resistance to working closely with local people back in the ’70s?


Weber: In those days, conservation was what biologists did. And often it wasn’t even biologists. Most of the people out in the field were studying animal behavior. There were people studying elephants, Jane Goodall studying chimps, Dian Fossey with gorillas. It was fascinating work and it captured the world’s attention, which we have to do. But if you want to do conservation on the ground you have to go beyond behavioral work and theoretical studies. Also, many of these people were steeped in what’s called the ‘fortress model’: Stay out or we’ll arrest you, fine you, or worse. The paradigm is changing but we’re still not there yet. Most working conservationists today recognize that people are central to the equation. But how you get people incorporated remains the real challenge.

One of the other important lessons from your work is that you have stayed involved for the long haul. These goals can’t be achieved in two or three years.


Weber: Yeah, it’s interesting, when we first came to Yale, someone asked us, ‘What do you do as you parachute in as a conservationist and begin telling people what to do?’ Well, first of all, you don’t do that. You take a long drive in the back of a pickup truck on a rocky road. Then you start listening and learning. After a while you can begin to generate some ideas. But the first thing you have to do is inform yourself that you’re in a new place, find out the local capacity and strengths, learn about how you can work with those, and if they don’t exist in some areas how you can help build them up. 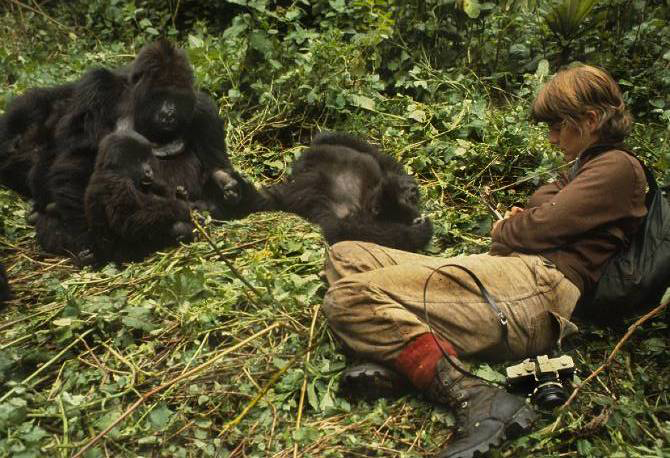 F&ES Professors Amy Vedder and Bill Weber have worked on dozens of conservation projects across the globe. But they are best known for their efforts to conserve mountain gorillas in Rwanda, a place where they still bring Yale students every year. Read more
Almost everything in conservation in Rwanda is run by Rwandans now. And a number of those people are people we took on when they were in their 20s. Now they’re in their 40s, going on 50, and they’re in senior positions, which is great to see. But I think the key is a slow approach, adapting when you learn something new, and responding when conditions change.

As I said earlier, the mountain gorillas are a very special case. They live in a healthy climate. You’re seeing animals at 8,000 to 10,000 feet. There are no snakes, there’s no malaria, and there’s a really good road network. A lot of things favor gorilla tourism, mostly the gorillas themselves, who tolerate these other apes who come in and sit with them for an hour every day. Much of that can’t be replicated. But then, the overall approach should be the same: you go in and listen, learn, try to figure out what’s going on, consider stakeholders’ interests. And then take the time to do good multidisciplinary research, to find out what could work there. How do you take the things that are working against conservation and make them positives? And how do you reinforce existing attitudes that are helpful to conservation? That approach can work almost anyplace.

After four decades in the field, F&ES conservationists take students back to where it all began